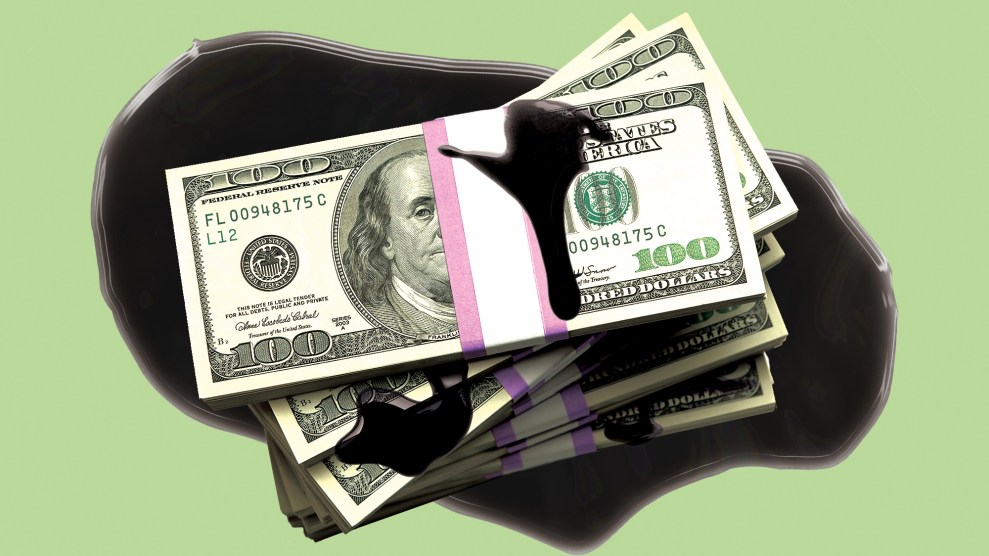 After an epic summer of hurricanes, heat waves, floods, and fire, climate change has never seemed more alarmingly real, at least to the roughly one in three Americans directly affected by it. By early July, we already had eight climate-related disasters with economic losses of $1 billion or more, together claiming at least 331 lives.

Mark van Baal saw this all coming. A one-time seller of refrigeration systems in Europe, he became a journalist because he was “fed up with not doing something socially responsible.” Inspired by Al Gore’s An Inconvenient Truth, he zeroed in on climate change and came to see the fossil fuel industry as a key culprit. But after 10 years of journalism, he was frustrated by the limitations of writing about the need for change. “I came to the conclusion that Shell does not listen to journalists, nor to activist groups, nor to governments,” van Baal wrote. “The only ones who can convince Shell to choose another course are its shareholders.” So he shifted from journalism to advocacy.

The 20 largest firms, responsible for one-third of all carbon emissions—and decades of denialist propaganda—have long resisted efforts to overhaul their business. Reasoning that the success of the Paris agreement hinges on the compliance of Big Oil, van Baal set out to force that compliance. In 2015, he started Follow This, an organization that orchestrates shareholder rebellions against publicly held fossil-fuel companies in the hope of bringing recalcitrant executives to heel.

Here’s how it works: van Baal’s organization facilitates small purchases of stock in a given oil company by individual investors. Once those investors accumulate enough shares (for Shell, the minimum was 5 million euros worth), they gain the ability to introduce a resolution to the board of directors, which Follow This does on their behalf. The resolutions demand that companies pledge to make their operations compatible with the Paris agreement. This forces the board to take a formal position on the matter and requires voting shareholders to make an active choice.

The group’s first target, in 2016, was Shell, only 3 percent of whose shareholders supported its climate-friendly resolution. (CEO Ben van Beurden had advised them to vote against.) When the resolution was reintroduced a year later, the vote tally in favor rose to 6 percent, and 7 percent abstained—a signal, Van Baal says, that they disagreed with the board. That same year, Shell announced it would cut its emissions in half by 2050. The company didn’t promise any immediate action, Van Baal points out, but its announcement signaled a shift in the conversation.

Today, Follow This boasts thousands of “green shareholders” who have introduced shareholder resolutions to squeeze the leaders of 12 different oil and gas companies. As a result, the group reports, Shell, Equinor, and BP all have set climate targets, and climate resolutions have received majority votes at ConocoPhillips, Phillips66, and Chevron. So I reached out to Van Baal to ask what the changes will mean for Big Oil. His responses have been edited for length and clarity.

Talk a little bit about the progress of your organization.

Yeah, we are now representing almost 8,000 green shareholders who all share our conviction that we need the oil industry to change to have any chance to stop climate change, to achieve the Paris goals. We use the ownership in these companies to make them change course. We think this is crucial, because at the end of the day, the shareholders are the only entity these companies have to listen to. Most oil companies are more powerful than most [other] companies and most countries.

Why was this kind of tactic needed?

We need to persuade the boardroom, and they’re not going to change on their own accord. When I started Follow This, and even when I was a journalist, I sometimes dreamt that a major CEO would have an epiphany. These people live in the same world as we do. And they must also see that the only way to protect supply chains is to dramatically change their business. So I sometimes pictured a CEO with an emotional debate with one of his children and a sleepless night and then he would see the light.

But that’s not gonna happen. These people are so completely entrenched in their historic business model, which is basically turning hydrocarbons into Petro dollars. They’ve dedicated their career to this simple model of getting oil out of the ground to refine it and sell it. So they can’t imagine another world. But luckily, investors can. If the climate crisis turns into climate disaster, they know that their billions are at risk. So it’s really risk management.

You’ve made some gains, but how can these executives really be brought around?

Investors have to step up. The only way these companies are going to change is when investors massively vote for these kinds of resolutions. Because otherwise they can always claim that investors are happy with their behavior. With this group of retail shareholders, we’re able to show that there’s a large group of people who want these companies to change and see them as part of the solution. So we file the shareholder resolutions, we make sure it’s on the agenda, and investors have to vote—but we need the big institutional investors to really persuade them.

What do you want from the companies?

We have a very simple and consistent ask: Commit yourself to the Paris agreement, commit yourself to emission reductions in line with the agreement. And science basically dictates it. If we were to have any chance to achieve the Paris agreement, emissions have to be cut by 40 percent by 2030, approximately, and have to be zero by 2050. That’s the scientific translation. So, radical emission reductions in the next 10 years. That’s the only thing we asked for.

And how do you define emissions?

Why are fossil fuel companies so resistant to change?

They know the outcome. They know that they have to stop investing in oil and gas and start investing in something else. They said to shareholders, you have to vote against this because it’s an unreasonable ask, because we have no responsibility. We have no control over the emissions of our products.

As your resolution gained a bit of traction, Shell pledged to become a net zero emissions company by 2050. Why do you think they did that?

So then they could rightfully claim that they were the first [global oil company] to take responsibility for scope three product emissions. They basically said, “Your resolution is unnecessary because we are now industry-leading with this promise for 2050. So now you should focus on other oil majors.” We did, but we kept the pressure on Shell because we really want the industry to change in this decade. A promise for 2050 is useless if it’s not backed up by immediate action, right? If the next 10 years will be business as usual, which most oil majors want, then we already lost any chance to reach the Paris agreement.

Delay is the new denial!

I think there’s three steps. First, oil companies denied climate change. Then they denied that it was a supply side problem. They said, “It’s the consumers. And as long as people want to fly, and drive a car, then there’s nothing we can do. We just delivered the demand.” Now the denial is: “We have to change, but we can only change slowly.” So they make this delay. A lot of oil majors have nice promises for 2050.

How do you light a fire under them, so to speak?

To get to majorities you need institutional investors. They have to be crystal clear to industry that there is no time for gradual transition anymore. If they wanted a gradual transition, they should have started in the ’80s when they knew—and then decided to fund climate denial. It needs to be a very disruptive transition.

But is all of this happening too late?

I think it is absolutely possible to achieve the Paris Accord, but that means a reduction of emissions worldwide of roughly 40 percent. Almost half of the oil and gas needs to be replaced by renewables in the next 10 years. And technically it’s possible. There’s enough sunlight, wind, tides, what have you, to power the world economy. It’s not a supply-side problem. The only problem is the incumbents who refuse to change.

How can these oil execs ignore the extremely obvious threat that climate change poses?

I’ve spent a lot of time thinking about this: How is it possible that you don’t see this? That we’re heading for the abyss, that you play the key role? I always refer to the Kodak scenario because it’s such a clear example. Kodak had invented digital photography in [the mid-1970s]. And they didn’t dare to bring it to the market because they were too afraid. They were too accustomed to their old business model selling film.

[Renewable energy] is getting cheaper and cheaper. And getting oil out of the ground is getting more expensive. The real problem is in the boards of these companies. There are people who have made it to the board by being extremely successful in just one business model. It’s a cliché, but Bill Gates always says success is a lousy teacher—it convinces smart people that they can’t be wrong. I can’t get into the minds of CEOs. I think maybe a problem is that if they were to go for a new business model, they have to give up power. They have to say, “Okay, I don’t know. I also don’t know exactly what’s gonna happen in the future.”

I don’t think we should underestimate the lives of these people. Imagine you joined a company in your early 20s; you get a new job in a new part of the world. You take your family across the globe. It’s a lot of sacrifice. And then every assignment you’re very successful, and you get a promotion. And finally you reach the top of the pyramid. And then outsiders are going to tell you that you need a new business model!

But isn’t the bigger issue an unwillingness to sacrifice the golden goose?

The reason we are successful is because investors now see how big of a threat climate change is to their portfolios. Traditionally, an investor who has responsibility over pensions would say, “we give every company maximum flexibility to maximize profit, because that’s what we have to do for our pensioners.” And now they say, “Our entire portfolio is at risk. So we’re gonna put constraints on the oil and gas industry.”