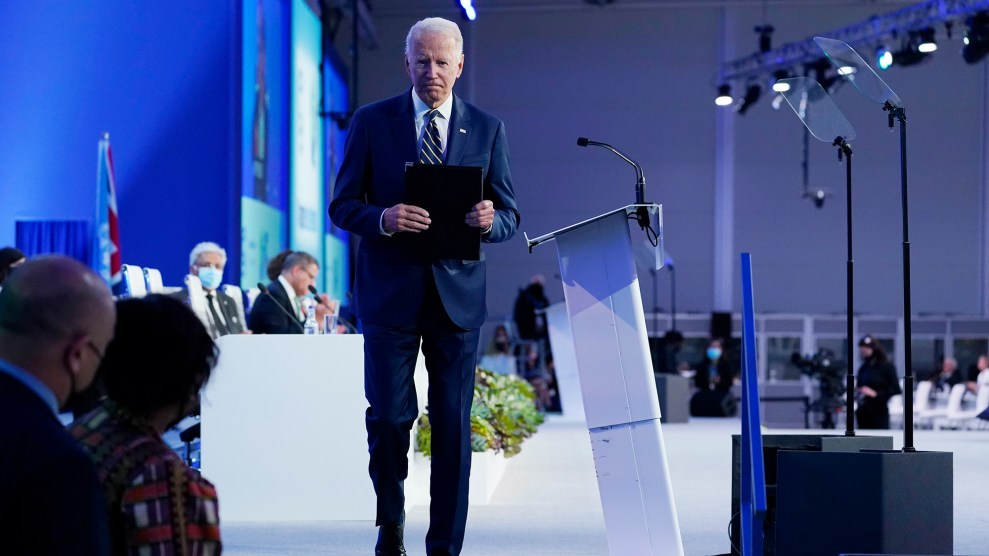 This story was originally published by HuffPost and is reproduced here as part of Climate Desk.

When President Joe Biden spoke about fossil fuels during a Democratic presidential debate in March 2020, he promised to “take on the fossil fuel industry” and rapidly transition the nation away from planet-warming fossil fuels.

“No more subsidies for [the] fossil fuel industry,” Biden said. “No more drilling on federal lands. No more drilling, including offshore. No ability for the oil industry to continue to drill, period. Ends.”

Environmental advocates say Biden is breaking that pledge now as the administration prepares to hold the largest offshore oil and gas lease sale in U.S. history on Nov. 17.

The sale comes on the heels of COP26, the United Nations climate talks in Scotland, where diplomats are on track to strike a deal that falls far short of what scientists say is necessary to avert catastrophic warming. The Department of the Interior will offer up more than 80 million acres—an area larger than the state of New Mexico—of the Gulf of Mexico for drilling. It is bigger than any lease sale conducted under President Donald Trump’s fossil-fuel-friendly administration, and Interior estimates it will lead to the production of an additional 1.1 billion barrels of oil and 4.4 trillion cubic feet of natural gas over several decades.

The administration argues its hands are tied, following the June decision by a Trump-appointed federal judge in Louisiana to strike down Biden’s executive order temporarily pausing new oil and gas leases across federal lands and waters.

“The administration has made clear that it disagrees with the ruling and the Department of Justice has appealed it, but the government must comply with it in the meantime,” White House spokesman Vedant Patel said in an email statement, noting that Interior previously canceled the pending lease sale.

“There is no way the US can meet its climate obligations by continuing to operate the program with business as usual.”

The injunction stemmed from a lawsuit brought by 14 Republican attorneys against the administration. The judge’s opinion relied in part on a study of the leasing pause’s potential economic impacts, which an industry trade group helped shape and that multiple independent researchers dismissed.

Legal experts HuffPost interviewed said Biden and his team have some avenues to scale back, delay or cancel the sale, but that they’d come with legal and political risks the administration may be unwilling to take.

Sam Kalen, a natural resources law professor at the University of Wyoming, called the Louisiana judge’s ruling as it pertains to offshore leasing “quite questionable.” If a non-governmental organization were to file a complaint seeking to enjoin the upcoming Gulf sale on legitimate grounds—for example, a faulty environmental analysis—then the administration could opt to postpone the auction pending a resolution in court, he said.

Drew Caputo, an attorney with environmental group Earthjustice, said the Biden administration could have gone further than simply appealing the judge’s ruling by requesting the appeals court stay, or suspend, the order while the administration argues its case in court.

Additionally, Caputo said, it could have declared the sale illegal under the National Environmental Policy Act due to its future climate impacts or used its authority under the Outer Continental Shelf Lands Act to withdraw large offshore areas from future leasing, much like the Obama administration did with Arctic and Atlantic waters in 2016.

“I’m not saying there wouldn’t be legal and political consequences of taking any of these steps. I assume that the industry and their political allies would sue instantly,” Caputo said. “But we have an unbroken, scientific consensus that we are out of time to take action to deal with climate change. Given the fact that 25 percent of US carbon emissions come from federal oil, gas and coal, there is no way the US can meet its climate obligations by continuing to operate the program with business as usual. And that’s what proceeding with this lease sale does.”

Earthjustice sued the administration in September in an attempt to block the Gulf lease sale.

In a letter last week, Earthjustice and more than 250 other organizations called on Biden to cancel the Gulf auction amid what Biden himself has warned is a “code red” moment on climate. Going through with it, the groups said, would “make a mockery” of his own commitments on a global stage at the COP26 climate conference this month.

“There is still time to keep your promise to end new leases on public lands and waters and address environmental racism,” reads the letter, spearheaded by environmental organization Friends of the Earth. “Please utilize your existing authority and defer Lease Sale 257 to reckon with the latest evidence and properly estimate and acknowledge the full range of impacts from lease sales in this region.”

.@POTUS, you can’t be a #ClimatePresident while allowing for fossil fuel expansion on public lands & oceans. Showing up at #COP26 w/ a major lease sale scheduled is a failure of leadership. #BidenKeepYourPromise #NoNewLeases #BuildBackFossilFree pic.twitter.com/5G6rtfdtTs

Interior is also moving ahead with onshore oil and gas auctions early next year across some 700,000 acres in multiple Western states, including Wyoming and Colorado, although the Bureau of Land Management recently announced it will for the first time begin analyzing greenhouse gas emissions and weighing the climate impacts of proposed leases—a move that could ultimately result in leases being scaled back or canceled.

Many advocates have grown increasingly frustrated with what they see as a disconnect between Biden’s words and actions on climate.

During a keynote speech at the UN climate summit, Biden described the next 10 years as “a decisive decade” and assured world leaders that the US will once again lead the global effort to confront the climate threat. But with gasoline prices soaring, the administration has asked foreign nations to boost fossil fuel production—a move that Biden acknowledged “​​seems like an irony.”

The fossil fuel industry has stockpiled enough federal leases and permits to sustain it for decades.

It remains to be seen what sort of interest the upcoming sale will generate. But any new leasing at home is all but certain to lock in domestic production for years to come. Acres sold during next week’s Gulf auction, for example, likely wouldn’t be developed for five or 10 years.

“Claiming that we’re only taking short term action to foster oil and gas production while we make the transition on the one hand, and on the other hand selling a carbon bomb of a lease sale in the Gulf of Mexico that can’t go to production for close to 10 years—there’s no way to square that circle,” Caputo said. “It really points out the inconsistency between the federal oil and gas program today and the climate needs of America and the world.”

The administration has set a goal of slashing US carbon emissions by at least 50 percent below 2005 levels by 2030, and achieving net-zero emissions by the middle of the century. Congress is currently negotiating the president’s Build Back Better plan, which includes an historic $555 billion in climate spending.

Mark Squillace, a professor of natural resources law at the University of Colorado Boulder, said he’s sympathetic to the concerns of environmentalists who want to see the Biden administration stop fossil fuel development on public lands and waters. But in light of the Louisiana court ruling, he said, there should be a greater focus on limiting development overall, both on federal and private land, and ensuring that all future drilling and mining is done in an environmentally responsible manner.

The industry has stockpiled enough federal leases and permits to continue drilling on public lands and waters for decades. Shortly after Biden took office, the Interior Department launched a review of the federal oil and gas leasing program. Interior Secretary Deb Haaland, who has described the program as “fundamentally broken,” said in May that the public could expect an interim report to come out this summer. Months later, it remains under wraps.

“Even without the report, we know what needs to happen,” she told reporters earlier this month, according to E&E News. “We are doing whatever we can at the department to ensure we are analyzing these leases with climate change as a backdrop. We need to absolutely consider climate change, we need to consider the social cost of carbon in the things that we do.”

If the administration follows through with the Gulf lease—there is no indication that it won’t—it is certain to face heavy backlash from environmental and climate advocates.