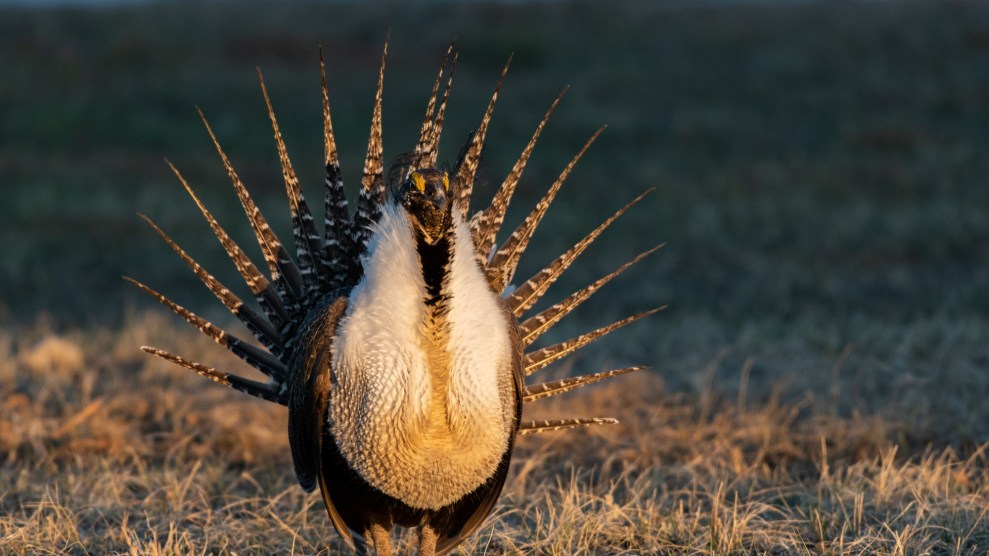 The Biden administration is considering new protections for the greater sage grouse, a bird known for the strutting and puffed-up courtship displays of males, that is losing grassland habitat across the western United States to climate change and pressure from industrial development.

The sage grouse, known also for a bubbling sound during courtship, is fast-becoming emblematic of Biden’s efforts to reverse Trump-era relaxations of environmental protections across vast swaths of public federal lands across the region.

The bird has become a symbol, especially, of the clash between conservationists and energy companies eager to exploit resources lying below its range.

The proposed tightening of regulations comes after decades of loosening protections as successive administrations have imposed and then reversed directives on permits relating to oil and gas drilling and grazing rights.

According to Audubon’s Guide to North American Birds, the greater sage-grouse has disappeared from much of its former range. Habitat loss through clearing for farmland and overgrazing, as well as climate change, has let to population declines across a wide expanse across Utah, Wyoming, and Montana where as much as 90 percent of its natural environment has been lost.

Even reimposing Obama-era protections may be insufficient to prevent disturbance of sage grouse habitat.

In 2017, the Trump administration tried to scale back conservation efforts adopted when Biden was vice-president two years earlier that affected 10m acres of open land across the west of the United States. But a federal court blocked Trump’s changes.

But environmentalists argue that Biden’s 2015 conservation plans were in themselves insufficient to close loopholes allowing for grazing and drilling on public land.

Resurgent disagreements over greater sage grouse protections are now likely to grow more intense, with Republican-run states clashing with wildlife advocates over how much space the birds need to survive.

The Montana Democratic senator Jon Tester has said he believes Biden’s new Bureau of Land Management director, Tracy Stone-Manning, a former aide, would pursue a collaborative, balanced approach that would protect the grouse from becoming an endangered species.

But western-state Republicans—including Montana’s governor, Greg Gianforte, and Wyoming’s governor, Mark Gordon, along with aligned senators, have said states should be given deference to wildlife management and federal lands kept open for energy exploration and grazing.

According to the BLM, the agency will examine how climate change is adding to pressures on the grouse population. Culver pointed to data showing wildfires burned almost 10,700 sq miles of the bird’s habitat since 2016.

Earlier this year, federal officials said that they would consider bans on new mining to help the birds. But even reimposing Obama-Biden era protections may be insufficient to prevent disturbance of sage grouse habitat, environmentalists have warned.

“The Obama administration did their best to please all the different ends of the political spectrum. But in the end they didn’t please anybody and they didn’t give the sage grouse the habitat they needed,” Erik Molvar of the Western Watersheds Project told the Associated Press.