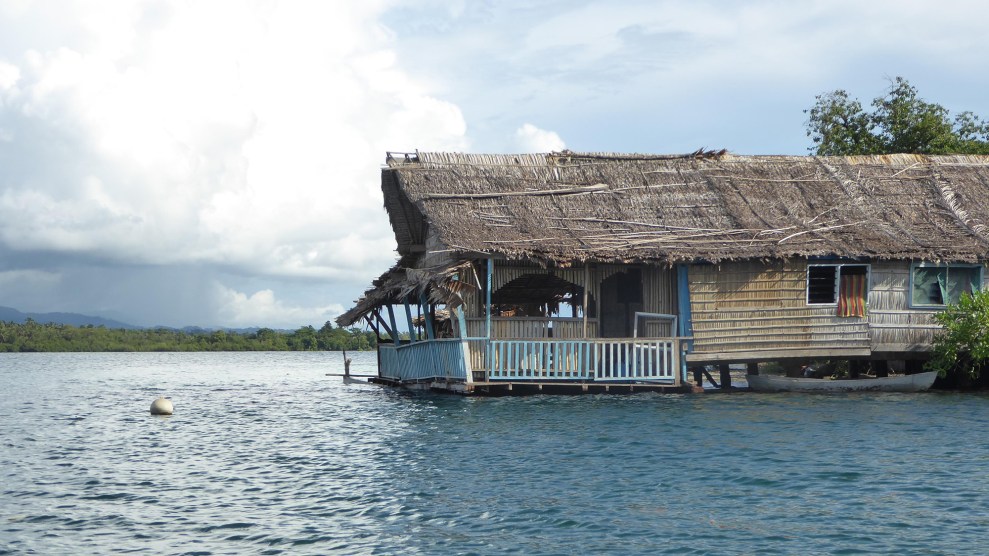 Langa Langa Lagoon in the Solomon Islands. The South Pacific is seeing some of the worst effects of sea level rise.KYDPL Kyodo/AP

This story was originally published by The Energy Mix and is part of Covering Climate Now, a global journalism collaboration.

If you live on a small island or in the heart of drought-hit Africa, the progress at the climate talks in Glasgow does not seem so rosy as the flurry of announcements and political grandstanding of the first few days would suggest.

“We need drastic action now to avoid the cataclysmic impacts of climate change,” said Janine Felson, deputy head of delegation for the low-lying coastal state of Belize. “Reaching net zero by 2050 is a grand target, but we need to start now and have made considerable progress by 2030. We need deeds to follow the rhetoric. We need commitment and solidarity. We do not see that happening here.”

Felson is advisor to the Alliance of Small Island States, a group of 39 islands and coastal states whose existence is threatened by sea level rise, storms, and loss of water supply. “What is needed most is climate finance, and it needs to flow now.”

At the moment, however, aid is going down not up. The 39 islands received $1.5 billion in 2019 to mitigate and adapt to climate change, the last year figures were available. That was a cut of 25 percent on 2018, when it was $2 billion.

“None of these small countries have any responsibility for causing this problem, yet we are suffering the consequences.”

“Consider that half the money that has come our way is in loans, not grants, and you see where we are.”

“Bear in mind none of these small countries have any responsibility for causing this problem, yet we are suffering the consequences. Then consider that half the money that has come our way is in loans, not grants, and you see where we are,” she told The Energy Mix. “It is simply not enough.”

Felson set these tiny sums in aid against the $2.5 trillion that rich countries provided in subsidies for fossil fuels last year. “If the rich world would pledge to end all fossil fuel subsidies by 2023, that would be real progress,” she said. “Climate change knows no boundaries. If that subsidy money could be diverted to us, it would be an investment in our future.”

One of the most contentious topics being discussed in closed negotiating rooms at the COP is the issue known to delegates as “loss and damage.” This is the “damages” the rich countries that have caused climate change should funnel towards those smaller, less-developed states that are already suffering climate change and cannot repair or adapt to prevent further disasters without outside financial help.

The issue has been on the agenda since the Paris COP in 2015, and remains unresolved. For many delegates from more than 100 countries that could benefit from this compensation, progress on loss and damage is vital to measure the success of the talks.

“There is a disconnect between the big announcements,” said Power Shift Africa Director Mohamed Adow. “If you believe in the ‘polluter pays’ principle, then the scale of the finance needed to help developing countries is nowhere near enough.”

He said he was heartened by a deal announced earlier in the week to wean South Africa off coal. It was what Africa needed. The sum involved was $8.5 billion over three to five years—but that was just one country being helped ,out of the 54 in Africa. All of them need aid to leapfrog to the renewables age without burning fossil fuels. They’ll be looking for both money and technological help to do so.

Kenya, whose people are suffering from climate-induced drought, already gets 90 percent of its electricity from renewables.

Adow’s own country Kenya, with three million people facing malnutrition because of climate-induced drought, already produces 90 percent of its electricity from renewables. But it needs help to develop its economy and not have to turn to fossil fuels to do so.

With half a billion people in Africa living with energy poverty and in need of help, Adow said he was angry to see the United States, Canada, and Norway still expanding and subsidizing their fossil fuel industries while telling the rest of the world not to develop them.

“They are hypocritical. When are they going to phase out fossil fuels?”

He added that the international support for developing nations is a fraction of what is needed. “The signs are not looking good for the success of the conference,” Adow told The Mix. “Every country is looking after itself—and the message to us is, ‘You are on your own.’”

At the same time, Adow said he isn’t giving up on the process—or the 1.5° C target. “We are at 1.1° C already, and the impacts are terrible. It is hard to imagine how much worse it will be at 1.5° C, let alone more than that. It would be the same as all of us agreeing to commit suicide at the same time.”

But however badly negotiations are going, he said he would not give up on the 1.5° C target or the COP26 process. “It is all we have got, so we have to work with it and try and push the process as far and as fast as we can.”