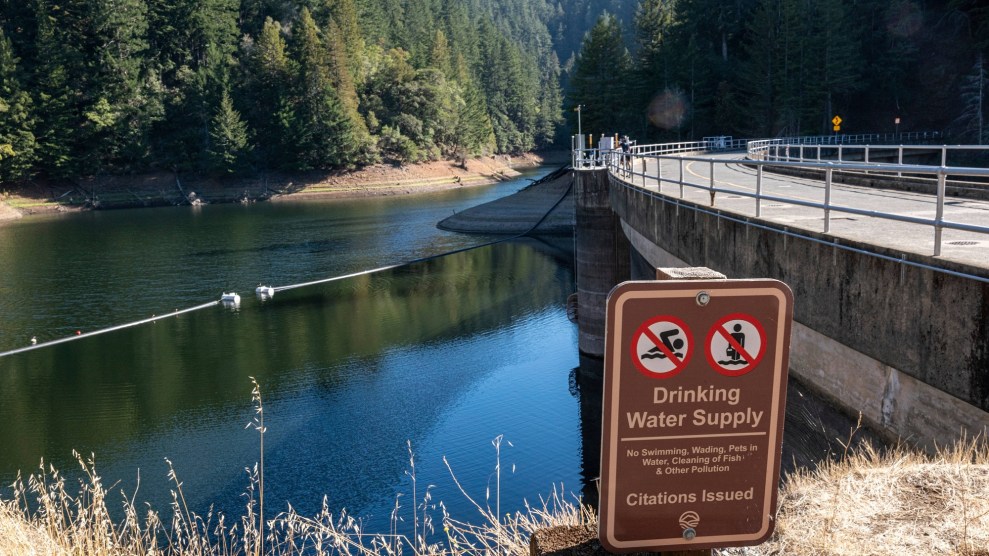 On a dusty hilltop in San Diego, the drinking water of the future courses through a wildly complicated and very loud jumble of tanks, pipes, and cylinders. Here at the North City Water Reclamation Plant, very not-drinkable wastewater is turned into a liquid so pure it would actually wreak havoc on your body if you imbibed it without further treatment.

First the system hits the wastewater with ozone, which destroys bacteria and viruses. Then it pumps the water through filters packed with coal granules that trap organic solids. Next, the water passes through fine membranes that snag any remaining solids and microbes. “The pores are so small, you can’t see them except with a really powerful microscope,” says Amy Dorman, deputy director of Pure Water San Diego, the city’s initiative to reduce its reliance on water imported from afar. “Basically, they only allow the water molecules to get through.”

But to be extra sure, the next step blasts the water with UV light, to obliterate any microbes and other trace contaminants. The end result is water in its purest form—too pure, in fact. The last phase is “conditioning” the liquid by adding minerals back to it. Without that, the water would leach the copper out of pipes. If you drank it, it’d soak up your electrolytes like a sponge.

The Colorado River, which 40 million Westerners depend on for water, is withering under a historic drought.

If that all sounds like a rather convoluted way to get drinking water, that’s because the American West is facing a rather convoluted climate crisis. San Diego—and the rest of Southern California—have historically relied on water from Northern California and the Colorado River. But they’ve always been at the end of the line. The river hydrates 40 million other people in Colorado, Wyoming, Utah, Arizona, Nevada, and New Mexico, and it is withering under a historic drought, a harbinger of even worse water scarcity to come as the climate warms.

So San Diego has to figure out how to do more with less water. The Pure Water program aims to provide more than 40 percent of the city’s water from local sources by the year 2035 by reusing water recycled from homes and businesses. (That means water that has flowed through sinks, showers, toilets, and washing machines.) “We’re diversifying the portfolio,” says Todd Gloria, San Diego’s mayor. “We’re heavily dependent upon water that comes from very far away, and that’s a problem that we have to address.”

The project is just getting off the ground, and the purification system at the North City Water Reclamation Plant is actually a lab of sorts: Engineers have been experimenting with different kinds of membranes, for instance, to see what works best for the wastewater the facility receives. Across the street, the city is breaking ground on a bigger facility, which will go live in 2025 and eventually produce 30 million gallons of water per day. Phase two, which calls for the construction of even more facilities, will eventually drive production to 83 million gallons a day. The Environmental Protection Agency is providing loans for the Pure Water project, with additional funding coming from federal and state grants.

The water-recycling revolution is just getting going in San Diego, but its proponents hope it will ripple across the American West. In June, legislators in the US House of Representatives introduced a bill that would funnel $750 million into water recycling projects in 17 western states through 2027. (The bill hasn’t made it past committee.) “This is beginning to be our new normal—88 percent of the West is under some degree of drought,” Representative Susie Lee (D-Nevada) told Wired in July. “Lake Mead is at the lowest level it has been at since the Hoover Dam was constructed. And the Colorado River has been in a drought for more than two decades.”

The technology to recycle water on a large scale has been around for half a century—but it’s very expensive.

The technology to recycle water on a large scale already exists—it’s been around for half a century, in fact. But the problem is that it can cost billions to build a recycling facility, and you can’t just copy-paste a particular plan from one municipality to the next. The North City Water Reclamation Plant has been experimenting with different kinds of filtering membranes because not all water is the same. For example, the mineral content of the water flowing into the San Diego facility is distinct from what operators might be working with in New York. Recycling plants also cost a pretty penny to run, since pumping lots of water through fine membranes requires significant pressure. But then again, it also takes a lot of energy to pump water from northern areas to Southern California.

But if you’re able to recycle water on a large scale, you’ve got a powerful hedge against drought. “That’s an extraordinarily reliable supply, being able to access that flow of wastewater, clean it up, and then use it to offset the need for other supplies,” says Michael Kiparsky, director of the Wheeler Water Institute at UC Berkeley.

And really, water recycling is an investment. As water grows scarcer in the West, it’s also getting more expensive. The cost of San Diego’s imported water has tripled in the past 15 years. That could be a powerful factor for voters when it comes to supporting water recycling projects. “People’s bills are also extremely motivating, right?” asks Gloria. “When you explain to them that if we can control this resource ourselves—that we don’t have to rely on water managers north of us, or multistate agreements, water-transfer agreements with other counties—when we can control it ourselves, there is some greater ability to control costs.”

Historically, though, policymakers have had to battle recycled water’s “ick factor.” Folks may not trust it, even though it’s astonishingly pure. (I’ve tried it before—it was refreshing and didn’t kill me.) But Gloria points out that if your municipality is drawing water from the Colorado or some other river, and you’re downstream from other municipalities doing the same, you’re already drinking recycled water. “Everyone else grabbed that water, used it, discharged it back, and it’s on its way down here,” says Gloria. “So if you think that you aren’t already participating in some form of water reuse, you’re probably mistaken.”

But just as with picking stocks, it’s safer to hedge your bet with a diverse portfolio of resources rather than having a single asset. Any city that’s banking on one river or lake as its sole source of water is asking for trouble, because the more frequent and intense droughts that come with climate change will bring market volatility on a grand scale. “Water right now, I think, is our greatest natural challenge,” says Adrian Borsa, a geophysicist at the Scripps Institution of Oceanography in San Diego, who studies how aquifers store water. Drought is a more certain near-term risk to the West than other hazards that city planners have to account for, like earthquakes. “It’s not anymore, ‘Oh, we’re going to get this magnitude 7½ on the San Andreas Fault.’ That’s going to happen sometime, but for sure we are going to face water scarcity challenges.”

These projects anticipate one of the weird ways climate change will influence the hydrological cycle.

So Southern California cities are getting creative in diversifying their portfolios. The Carlsbad Desalination Plant processes seawater much the same way as a recycling plant does—by passing it through membranes. It provides San Diego County with 50 million gallons of fresh water a day. In Los Angeles, the 150-acre Tujunga Spreading Grounds act like a giant sponge, soaking up stormwater that then percolates into an aquifer below. Elsewhere around LA, specially designed greenspaces along roadsides do the same, gathering water into underground tanks.

These projects anticipate one of the weird ways climate change will influence the hydrological cycle: Rains in Southern California will come less often, but dump more precipitation when they do, since a warmer atmosphere holds more water. The idea is to catch the bounty when it arrives and store it underground for when it’s needed. “The attitude down here is that we have to have a bunch of different tools in the toolbox,” says Dorman of Pure Water San Diego.

To be clear, these technologies are in no way a substitute for the smarter use of water—or really, disuse of water. Between 1990 and 2010, water use in California actually plummeted, from 231 gallons per day per capita to 180 gallons, thanks to water-saving tech like low-flow toilets. But it’s also been thanks to behavioral change, like people switching from green lawns to yards full of drought-tolerant native vegetation.

The challenge will be the vagaries of climate change—the drought in the West could lift soon, or the region might be in the midst of a decades-long megadrought. “The old search for traditional types of water supply from rivers and groundwater is not going to be sufficient in a world of climate disruption,” says Kiparsky. “We need to be thinking in totally different ways, because the old ways just don’t work anymore, and the smart utilities like San Diego are seeing that.”