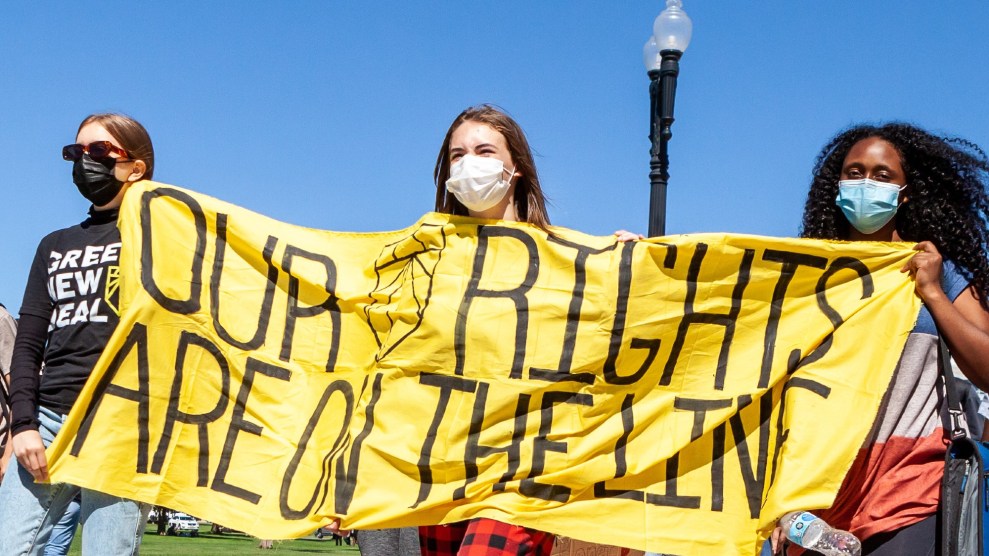 A few years ago, Erica Prather, the national outreach representative for Defenders of Wildlife, and her partner allowed every piece of plastic they used for an entire year to pile up in their living room, spilling over into their garage. It was a reminder that their waste is permanent. They called the mound of Styrofoam containers, dog bags and other trash their “Pile of Petroleum Past.” As someone who cares about the state of the planet, it was an example of Prather trying to live her values.

She wants others, including her own employer, to live their values too. But it wasn’t until Bernie Sanders ended his candidacy for the presidency in 2020 that Prather moved to a different, more drastic form of action: “I remember this moment when I was weeping during his concession speech, and he was like, ‘There are ways that the progressive movement can move on,’ and he literally said, ‘Unionize your workplace.’”

And unionize she did. Prather used the organizing skills she’d honed for years as an advocate for endangered species and applied them at her own workplace, Defenders of Wildlife. Quickly, other employees jumped on board; they voted to form their union in September.

And they are not the only ones. Employees at several other green groups have successfully formed unions over the last year, including Greenpeace USA, the Sunrise Movement, the Center for Biological Diversity and the National Audubon Society.

Environmental orgs have done a great job promoting diversity in nature—but not within their own workforces.

Environmental organizations have long sought to affect change outwardly—to promote biodiversity and stave off extinctions or to curb the impacts of the climate crisis. Now the organizations’ employees are turning to unions to change their workplaces from within, by fighting for higher wages and better benefits, and by forcing their organizations—whose leadership is predominantly white—to be more diverse and inclusive.

Green groups haven’t had the best track record in this respect. Earlier this year, a report produced by a diversity, equity and inclusion (DEI) consultancy firm hired by Defenders of Wildlife was leaked. Its contents, which detailed a “culture of fear,” were damning for the organization: The 144 employees surveyed described an unwelcoming environment for BIPOC employees, who experienced “tokenism, microaggressions, cooption of ideas” and bore the brunt of DEI work.

In response to the report, Defenders’ president and CEO Jamie Rappaport Clark told E&E News that the organization “is deeply committed to fostering a positive, inclusive and safe workplace where all voices are heard.”

The National Chapter of the Audubon Society, one of the nation’s oldest environmental organizations, is also aiming to improve representation. Tykee James, Audubon’s government affairs coordinator, started working at the nonprofit in 2018, the same year he co-founded a group for people of color. In 2020, he helped lead the unionizing effort at Audubon. “There needed to be a staff-led, staff-centered, POC-centered effort to support marginalized and historically excluded people in this organization,” James said.

“When workers don’t have a say, it’s the Black and brown…it’s the historically excluded people who feel those burdens first and worst.”

James hopes Audubon’s union will help management create DEI initiatives and trainings that staff can support. “We can have an opportunity to provide feedback (on DEI) that’s meaningful and moving,” James said. “When workers don’t have a say, it’s the Black and brown, it’s the most marginalized, it’s the historically excluded people who feel those burdens first and worst.”

Both Audubon and Defenders of Wildlife are in the nascent stages of their union efforts. They could take a cue from the Sierra Club, which signed a five-year contract with its shop, the Progressive Workers Union, in 2018. Prior to contract renegotiations, several employees—particularly women of color—were “seriously underpaid,” said Larry Williams Jr., who co-founded the Progressive Workers Union and worked there until recently. The union negotiated a contract that included pay raises, retirement and health benefits, and transparency around issues like how to get a promotion. Women of color at the Sierra Club also fought for a specific fund to be added to the contract to address inequities in pay and to cover the price of trainings and professional development, among other matters.