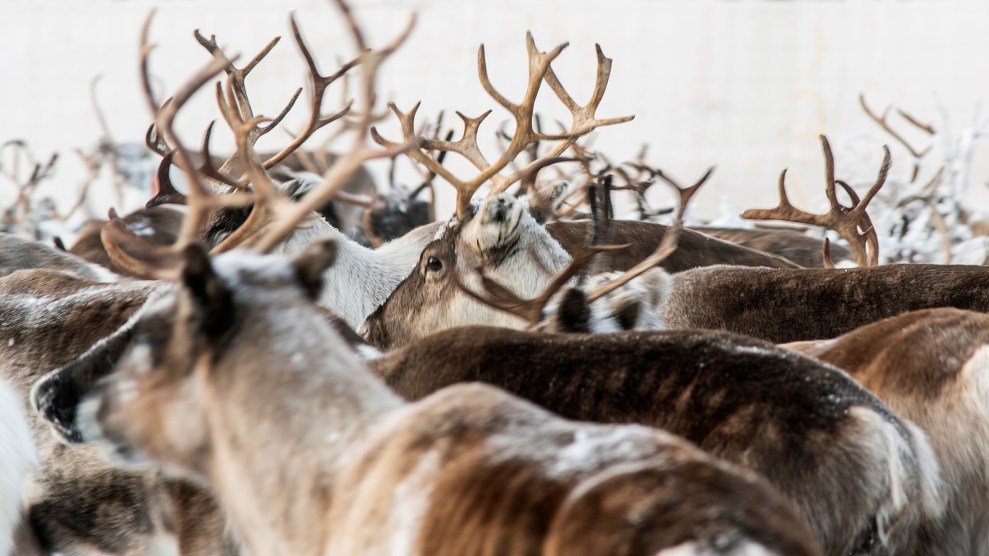 The Sami, the only indigenous people left in Europe, have more than 100 different words for snow. From seaŋáš, a fluffy, grainy snow that moves easily, to tjaevi, flakes that stick together and are hard to dig, the names are based on its texture, depth, density, and the harsh conditions of the Arctic winter.

But the Sami of Sápmi, who are traditionally fishers, trappers, and reindeer herders, do not yet have a word for what they are seeing more often on the ground.

“This new snow has no name,” said Lars-Anders Kuhmunen, a reindeer herder from Kiruna, Sweden’s northernmost town, near the Norwegian border. “I don’t know what it is. It is like early tjaevi, which normally comes in March. The winters are warmer now and there is rain, making the ground icy. The snow on top is very bad snow and the reindeer can’t dig for their food.”

The Arctic is warming not twice as quickly as the rest of the world, as previously believed, but four times as fast, according to a paper published in Science last week. Sápmi, an area that stretches over parts of four countries—Sweden, Finland, Norway and Russia—and is hemmed by three seas, recorded its hottest temperature for more than a century in July this year, hitting 33.6 C (92.5 F) during a summer heatwave.

Kuhmunen and other reindeer herders, who spend their days and often nights tending the herds scattered across vast tundras, are on the frontline of the climate crisis. Their reindeer, a semi-domestic species that has adapted to the harsh conditions of the polar region, are being pushed to the limit by the changes, they say. The animals use their shovel-like hooves to dig for lichen, their main winter food supply, as well as other plants that grow under the snow. But finding food is increasingly difficult.

“It’s hard to keep the herd together, so I have to work harder. They spread out more because they can’t find food.”

Warmer than average temperatures mean the snow that was semi-permanent throughout winter turns to rain, which in turn freezes on the ground, trapping lichen under the ice, so the animals cannot reach it. Thick snowfall, which also happens more often, adds to the problems by making it impossible for the animals to find the lichen by smell.

These freeze-thaw and rain-on-snow events happen naturally in the Arctic, but they are happening more often and on a larger scale. There have been mass starvations of reindeer, in 2013-14 in Russia and in 2018-19 in Norway, and the herders have to go much farther afield in the past few years to find grazing ground.

Kuhmunen, 43, a father of three, said the changing weather and shrinking grazing lands had made his job much harder. Speaking from the forest, six miles (10km) north of Kiruna, where he is following his herd, he said: “It’s hard to keep the herd together, so I have to work harder. They spread out more because they can’t find food. Now there are only four or five hours of daylight. When the polar darkness comes it will be harder.”

He adds: “Reindeer are losing their habitat, because of logging and mines. My father’s generation used to go on skis to the reindeer. We use snowmobiles because the distances are greater. I worry about it every day.”

The herding of reindeer is already threatened by human expansion, with forestry and mining activities moving into traditional grazing grounds. One study in Norway found that in the last century, undisturbed reindeer habitat had shrunk by 70%, including grazing lands flooded for hydroelectric dams.

The climate challenges faced by the Sami—and the impact on their rights and livelihood—have been researched and documented by the Environmental Justice Foundation (EJF), one of four charities in the Guardian and Observer’s 2021 climate justice appeal, as part of an international effort to lobby politicians to take climate action.

The Sami portraits, film and stories were used in exhibitions in the European parliament, the National Theatre in London, and the international art exhibition Venice Biennale, reaching hundreds of thousands of viewers and provoking far-reaching discussions on climate policy.

Aslat Simma, 42, a herder and former chief of the Lainiovuoma tribe, said: “This is December. The temperature should be minus all the time. A normal winter has temperatures of -20 to -25 C. Now the temperature can be zero or positive.”

“We are living with nature and we are dependent on the weather and the reindeer for all we do.”

Increasing rainfall in the autumn also leaves the lichen full of water, making it less nutritious for the deer, he said. “We are living with nature and we are dependent on the weather and the reindeer for all we do. But the reindeer are using up all their energy trying to find grazing land and to dig. They are living on the edge of how an animal can adapt. When the changes in climate come so fast, they can’t adapt. They have already adapted so much.”

Henrik Blind, a member of a herding family from the town of Jokkmokk, said: “When you live so close to a creature, you see the world through their eyes. You see how hard it is to live in these conditions. Everything is upside down.

“Our livelihoods depend on a planet that is not on fire. We are an Arctic people and our culture is written in snow. But climate change means the snow will get less and less.

“We must realize we can’t overconsume our planet. This is urgent. We need to listen to all the indigenous people in the world who know how to live in harmony with the planet.”