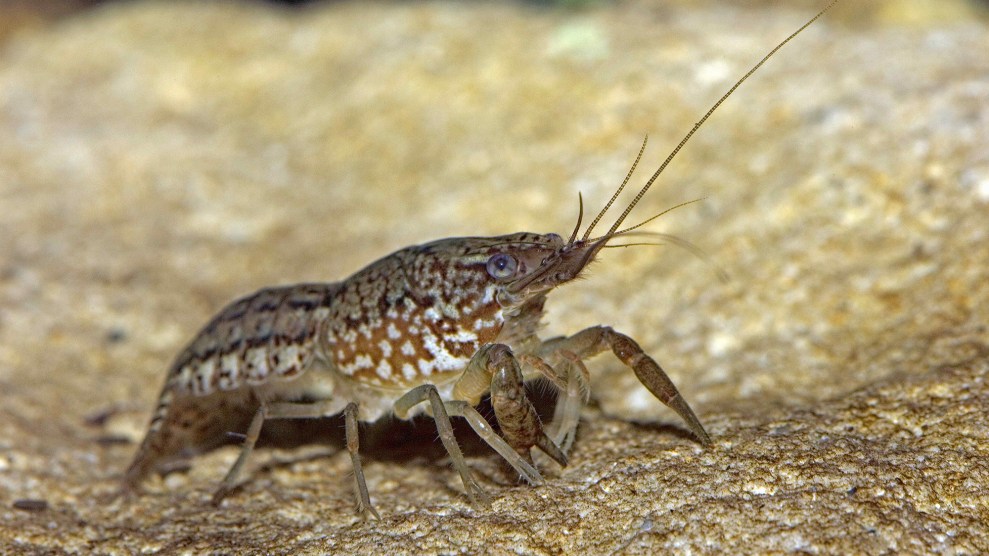 Small, bluish-grey and speckled, it would be easy to overlook the marbled crayfish. Except for the fact it is likely to be coming to a pond or river near you soon—if it is not already there. The all-female freshwater crustacean has become a focus of fascination for scientists in recent years, due to its unique ability among decapods—the family that includes shrimps, crabs and lobsters—to clone itself and quickly adapt to new environments, as well as the fact that it has spread exponentially.

The marbled crayfish was first recognized in 1995, when a biology student bought a bag of crayfish—sold to him as “Texas crayfish”—from American traders at a pet fair in Frankfurt. After becoming a burden to their new owner due to their inexplicably rapid rate of reproduction, he distributed them to friends who, in turn, dumped them in rivers, lakes and toilets, from where they spread rapidly, throughout Germany, much of mainland Europe and most profusely, the island of Madagascar, home to unique but extremely delicate freshwater ecosystems.

When Frank Lyko, a professor of epigenetics at the German Cancer Research Centre (DKFZ), first came across the creatures, referred to as marmorkrebs, he was astonished by their ability to reproduce clonally from a single cell, like cancer tumors, and saw them as an ideal model for research.

“All marbled crayfish share the same genome,” he says on a video call from his office in Heidelberg. “But they also adapt to various different environments, and do that in a hurry, which makes them scientifically remarkable and similar to a tumor, which also adapts to its environment.”

Lyko led the ambitious genome study that established the extraordinary fact that all marbled crayfish originate from a single foundational female. They reproduce without sex through parthenogenesis. In 2015, he gave the all-female crustaceans their species name of Procambarus virginalis.

In the course of his research, Lyko recalls driving to a lake about 15 minutes from his lab with his students. Donning head torches and waders and standing ankle deep in the water, “we waited until it got dark, then suddenly they emerged in their hundreds and thousands,” he says. “With a hand net, we caught them from behind and put them in buckets. It was so exciting. Soon after that, we started experimenting with eating them and found they were quite tasty.”

In Germany, where the marbled crayfish have invaded lakes and rivers, authorities have adopted a strict approach to them.

Klaus Hidde, a retired bank clerk turned hobby fisher, was tasked by the Berlin senate’s environment department last year with setting traps for the crayfish, which have been found in two lakes on Berlin’s western fringes. Not only are the crayfish in danger of killing off native species, “but they can also carry the so-called crayfish plague,” he says, referring to a fungal disease that more or less wiped out what had been a hugely successful European crayfish market 150 years ago.

Hidde was first contracted by the department four years ago to catch armies of red swamp crayfish that had broken out of ponds in parks, including the central Tiergarten, after heavy rain, and were found scuttling through the Brandenburg Gate. “In one year alone, I caught 42,000 of them. I was seen as a bit of a savior, even if I say it myself,” he says. He could get about $18 per kilo of swamp crayfish, and received a $9.54 top-up from the senate. Berlin restaurants snapped up the crustaceans, serving them up to diners as the novel “Berlin lobster.”

“Rather than giving up meat, in this case, the more of it we eat the better.”

Hidde is earning less for the marbled crayfish because, he believes, officials are “wary of creating demand” for the cloned animals, which could promote their breeding and exacerbate the problem. “I may give up, unless they’re prepared to make it worth my while,” he says, admitting he had personally yet to develop a taste for the meat. “I prefer to eat gambas [pawns] when I go on holiday to Spain.”

Lukas Bosch, the co-founder of Holycrab!, a biodiversity startup, hopes the marbled crayfish’s nutritional value will tempt Germans looking for sustainable alternatives to intensively farmed meat. The company is turning invasive species—from raccoons, Egyptian geese and wild boar to other crayfish, such as Chinese mitten crabs—into culinary delicacies, teaming up with top Berlin chefs to appeal to the ecological sensibilities of German diners. They have already sold the meaty tails of marbled crayfish on bread rolls and are experimenting with turning the animal’s high-value protein into rich fish stews and stocks.

“As these crayfish have no natural predators, our thinking is, why can’t Berliners take on that role?” he says. “Rather than giving up meat, in this case, the more of it we eat the better.”

Ranja Adriantsoa, a conservation biologist, first came across the marbled crayfish in Madagascar as a freshwater ecology student, around 2010. She delicately lifts one out of a tank in her laboratory, around 12 cm long from the tip of its head to its tail. As it wildly waves its antennae and clawed legs, she points at its marbled carapace and small appendages on the underside of its tail where the highly fecund animal “can store between about 200 and 700 eggs.” As it reproduces around four times a year—without needing to mate—one female has the potential to create a population of several million genetically identical females.

When Adriantsoa first went to work for the department of invasive species control at the University of Antananarivo in the Madagascan capital, the emphasis was on stopping the spread of the marbled crayfish, which are highly destructive, eating fish larvae, displacing native crayfish and destroying the nation’s staple food crop, rice.

“Let’s be clear, you would not want to deliberately import these but the attitude is now how to live with them.”

“But over time that perception has changed,” Adriantsoa says. “Let’s be clear, you would not want to deliberately import these but the fact that they’re here and established, the attitude is now how to live with them.”

In collaboration with conservation scientist Julia Jones, a professor at Bangor University in Wales, Adriantsoa and an international female-driven team of scientists launched the Perfect Invader to look at the impact of the marbled crayfish on human health. They found the crayfish can be an important source of cheap, high-quality protein for Madagascans, one of the poorest populations in the world where about 42 percent of children are affected by stunted growth.

The research also looks at the potential for the marbled crayfish to help tackle the transmission of schistosomiasis, which affects an estimated 290 million people worldwide, including millions in Madagascar. The hypothesis is that the crayfish prey on the freshwater snails that host the parasitic flatworms that cause the acute and chronic disease.

Back in Germany, working with the country’s largest research institute, the Helmholtz Association, Lyko is engaged in a pilot project to turn the marbled crayfish’s shells, which are high in chitin, a biopolymer, into biodegradable plastics. “You will see the first ever crayfish drinking straws this month,” he says.

Jones says that the marbled crayfish have taught her and other scientists to see “the big picture.”

“While we need to understand the negative ecological impact of the marbled crayfish in Madagascar, we also need to recognise and understand people having to learn to live intelligently alongside this crayfish—it’s there, there’s no getting rid of it,” she says.

She was at pains to stress that all measures should be taken to stop marbled crayfish from arriving anywhere else. The animals are banned in the EU and UK, though experts say some are likely held illegally in aquariums.

“They are spreading fast—they were in Poland the last time I looked, and will be in the UK eventually,” says Jones. “I think the marbled crab is likely to go down in history with other famous invasive species like the zebra mussel, the cane toad, or the grey squirrel.”

“If you’re reading about this for the first time, you can be sure you’ll be hearing a lot more about the marbled crayfish.”