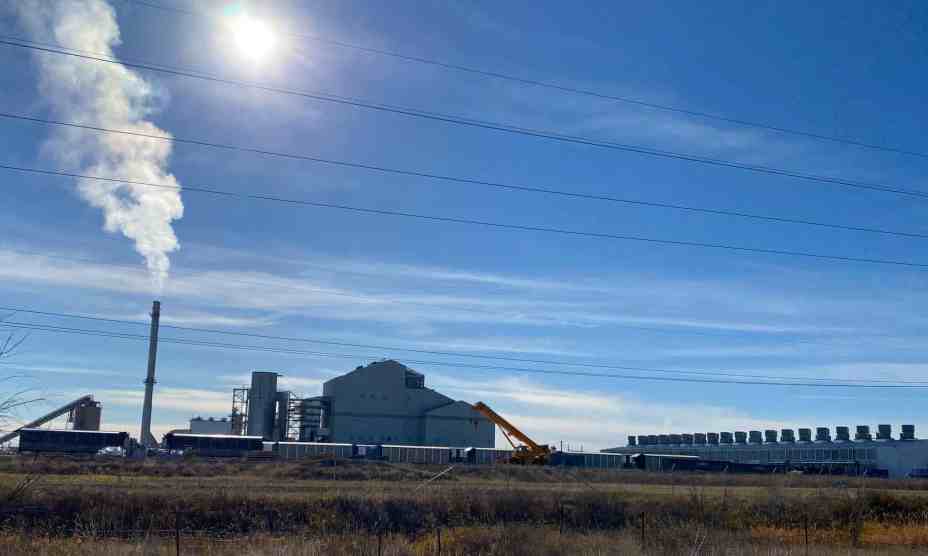 The Hardin plant in southern Montana was on the brink of closing when a bitcoin ‘mining’ company bought it back to life.Courtesy of Anne Hedges

Environmentalists in Montana called it the “death watch.” Following years of financial losses, one of the handful of remaining coal-fired power plants in the state appeared doomed, its likely fate offering a small but noteworthy victory in the effort to avoid disastrous climate change. But then a bitcoin mining company stepped in to resurrect it.

The Hardin generating station, a 115-megawatt coal plant located a dozen miles from the historic site of the famous battle of Little Big Horn in southern Montana, was slated for closure in 2018 due to a lack of customers, only to somehow limp on, operating on just 46 days in 2020. “We were just waiting for this thing to die,” said Anne Hedges, co-director of the Montana Environmental Information Center. “They were struggling and looking to close. It was on the brink. And then this cryptocurrency company came along.”

In a deal struck in late 2020, Marathon, a bitcoin “mining” company, became the sole recipient of the power station’s electricity. It established an elongated data center on 20 acres of land beside the facility that is packed with more than 30,000 Antminer S19 units, a specialized computer that mines for bitcoin. Such thirst for power is common in crypto—globally, bitcoin mining consumes more electricity than Norway, a country of 5.3 million people.

As the bitcoin miners moved in last year, Hardin roared back to life. In the first nine months of 2021 alone, the plant’s boilers fired up on 236 separate days. Planet-heating emissions from the burning of Hardin’s coal soared too, with 187,000 tons of carbon dioxide emitted in the second quarter of last year, more than 5,000 percent more than was expelled in the same period in 2020.

In the third quarter, a further 206,000 tons of CO2 was emitted, a 905 percent increase on 2020, Environmental Protection Agency (EPA) data shows. Hardin was operating at “near full capacity,” Marathon said in a December update, with the data center producing around 34 bitcoin on December 1.

“I was horrified to see it all happen, it was a terrible turn of events,” said Hedges, who took to visiting the plant and photographing the new data center as it took shape, fans perched on its roof to help cool the humming computer hardware. “This isn’t helping old ladies from freezing to death, it’s to enrich a few people while destroying our climate for all of us. If you’re concerned about climate change you should have nothing to do with cryptocurrency, it’s a disaster for the climate.”

Hardin is part of a wave of America’s “zombie” fossil fuel plants that have been brought back from the dead by cryptocurrency companies looking to feed the insatiable energy demands of their mining operations. China, formerly the epicenter of the bitcoin industry, effectively banished around half of the world’s currency miners last year and the resulting search for cheap power has seen companies eye struggling US power stations.

In 2020, a mothballed coal plant in upstate New York was converted to run on gas and power a large-scale bitcoin mining operation, a move that owner Greenidge Generation said is “bringing a piece of the world’s digital future” to the state. Eric Adams, the new New York City mayor who said he would accept his first paycheck in bitcoin, last week criticized the environmental impact of crypto mining.

Meanwhile, in western Pennsylvania, thousands of bitcoin mining computers have been packed in shipping containers alongside the Scrubgrass plant, which burns waste coal and was set to close before pivoting to bitcoin. And in Kentucky, a new bitcoin facility is being built next to the Big Rivers Electric Corporation, which owns and operates four coal-fired power plants.

This tactic, crypto firms argue, generates local jobs—Kentucky aimed to lure currency miners by passing a law that exempts them from an electricity sales tax—and uses up excess power without straining the grid for homes and businesses. But critics point out that the enormous electricity consumption needed to sustain the virtual currency is fueling the climate crisis and now threatens a partial resurrection of coal in the United States.

“Coal and natural gas power plants used for crypto mining that would otherwise be sunsetting as we decarbonize adds yet more carbon to the atmosphere in an era when we should be cutting such emissions,” said Benjamin Jones, a specialist in natural resource economics at the University of New Mexico. “Crypto’s continued or expanding use of fossil fuel sourced electricity imposes significant environmental economic costs on society.”

Jones said it is “troubling” to see that bitcoin’s already huge energy consumption is increasing and that most of this is coming from fossil fuels, despite some efforts by mining companies to increase the amount of clean energy they use—Marathon, the company that draws power from Hardin, has struck a separate agreement in Texas to take power from a wind farm.

Even some early champions of bitcoin have balked at its energy use, with Elon Musk last year halting Tesla’s use of the crypto currency because, he said, the electric vehicle company is “concerned about rapidly increasing use of fossil fuels for bitcoin mining and transactions, especially coal, which has the worst emissions of any fuel”. Uber, the ride-hailing service, has said it won’t accept crypto payments until the climate impacts are reduced.

A little more than a decade ago, it was possible to mine bitcoins with a single computer at home, using a negligible amount of electricity. The ultimate supply of bitcoins was limited and new bitcoins were awarded to those who could help validate transactions—the miners.

The process of validation essentially involves playing a giant guessing game that gets more difficult the more miners participate. As interest in bitcoin has soared, fast, powerful computers, packed in warehouses, now have a better chance of winning the guessing game and being rewarded with several bitcoins, which are currently worth around $42,000 each.

This race for bitcoin wealth gobbles up an enormous amount of electricity—around 0.5 percent of total global consumption. The energy used to mine bitcoin every 60 seconds would be enough to power the average American household for 17 years, while the annual electricity consumption for mining would be able to power all kettles used to boil water for tea in the UK for 28 years.

“Go back to 2020, renewable companies weren’t offering energy to bitcoin miners…so the only way for us to mine was to find stranded energy.”

While this usage has been criticized by climate activists, bitcoin miners claim it should be put in a different context. Fred Thiel, chief executive of Marathon, said that the movement of physical goods around the world, and even the use of washing machines in the US, uses more energy than bitcoin. “I understand the desire for some people to point bitcoin mining as the big bad boy, but on a comparison with every other industry out there, it’s insignificant,” he said in an interview.

Thiel likens bitcoin mining to the transactions processed in data centers by companies such as Amazon and Google and claimed that the industry is moving quickly towards renewable energy—Marathon plans to phase out its use of coal next year—after finding its options were limited when miners had to quickly shift away from China.

“Go back to 2020, renewable companies weren’t offering energy to bitcoin miners,” said Thiel. “Very few people wanted to even deal with bitcoin miners in the energy world. And so bitcoin miners spent time looking for stranded assets. And so the only way for us to mine was to find stranded energy, which we did in finding the Hardin plant.”

It remains to be seen if bitcoin will make a significant move away from fossil fuels, but in the meantime it will likely come under increasing scrutiny over its appetite for fossil fuel-powered electricity. “We simply don’t know how emissions from bitcoin mining will look in five to 10 years,” said Jones, the University of New Mexico professor. “It seems likely, though, it will to continue to be a major consumer of energy going forward.”