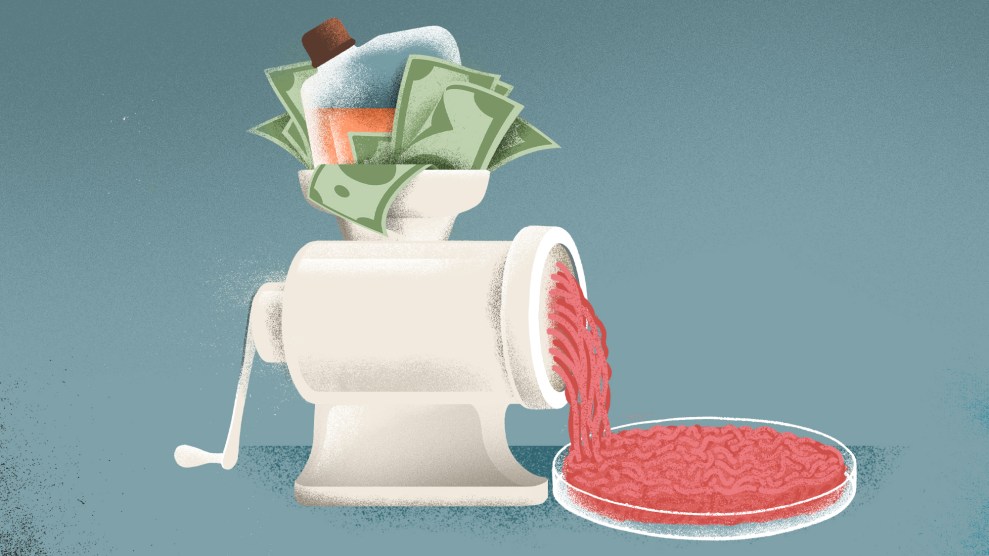 Lab meat—flesh grown in massive tanks instead of in the bodies of sentient animals—offers the promise of having our steak and eating it guilt-free, too. No vast amounts of water-polluting chemicals to grow feed crops; no low-paid, oft-injured slaughterhouse workers; no climate-warming gases from cow burps or manure lagoons, and no billions of animals slaughtered each year to satisfy our carnivory.

Once a staple only of science fiction, the stuff is poised to land on your dinner plate this year, at least according to boosters of the cultivated-meat industry (to use its preferred name). In Singapore—the only nation to approve lab meat for sale—you can already go to the JW Marriott South Beach hotel and order steamed chicken dumplings made with “real meat without slaughter” in the form of chicken cells grown by a US-based company called Eat Just. And other cell-meat startups vow to bring product to market in 2022, pending regulatory approval.

Yet several obstacles hold back a new era of widely available animal-free burgers, nuggets, and carnitas. The biggest involves something much less appetizing than chicken dumplings: the blood of unborn cow fetuses, extracted from their mothers after slaughter.

The use of fetal bovine serum (FBS) in labs isn’t new. Scientists have had the ability to biopsy animal cells and keep them alive outside the body since the 1950s. These test-tube cells need food to flourish, and researchers found that fetal bovine serum provided the special sauce—the right combination of hormones to make cells hum. In the 1980s, FBS technology gave rise to tissue engineering—growing cells in vitro to replace small amounts of damaged or diseased tissue in people. Extending the same techniques into a new realm, today’s cell-based meat companies have relied largely on FBS to develop their products.

But a substance that works great for medical purposes (it’s also widely used in vaccine development) creates two huge problems for an industry seeking to mass-produce slaughter-free meat. The first is expense. FBS sells for upward of $1,000 per liter—a major reason why, to break even on expenses, companies would have to sell their cultured meat for about $200,000 per pound, a 2020 analysis from University of California, Davis, researchers found. That’s why companies like the one conducting product demos in Singapore aren’t breaking even; they’re losing money.

The other big problem is optics: You can’t market your product as “slaughter-free,” let alone vegan, when you used a slaughterhouse byproduct to grow it. (Although Eat Just does just that with its Singapore chicken, which is made with a “very low level of bovine serum,” a spokesperson told Mother Jones.)

As a result, cultivated-meat companies are scrambling to find FSB substitutes. Such a “serum-free” growth medium exists, reports the Good Food Institute, a think tank that supports conventional-meat replacements. Trouble is, it currently costs nearly $400 per liter—still way too high to be commercially competitive.

“A whole new supply chain would need to form” to provide cheap serum-free growth media to lab-meat companies, says Christina Agapakis, a synthetic biologist who serves as creative director at Ginkgo Bioworks, a biotech firm. “And a lot of innovation in the biological manufacturing space will need to happen to make that possible.”

All of which means there’s some fine print on industry claims that lab meat will be on the market within the year: Even boosters don’t expect to see price-competitive cultured meat until 2030, while other analysts conclude that the FBS-replacement problem, plus other gaping challenges—like perfecting machines that can grow cells at industrial scale—means the stuff will likely never be economical.

Even boosters don’t expect to see price-competitive cultured meat until 2030.

So don’t hold your breath. If lab-meat startup execs are lucky, however, funders will be patient. In 2020 and the first half of 2021, investors poured more than $600 million into the space. Celebrity moguls Bill Gates, Richard Branson, Kimbal Musk, Sergey Brin, Peter Thiel, and John Mackey have all pitched in. And the gusher continues. In February, a started called Wildtype—intent on creating cell-based salmon—announced a $100 million infusion from investors including Leonardo DiCaprio and Robert Downey, Jr.

Maybe such deep-pocketed friends will float the industry long enough to work out the problems posed by replacing fetal bovine serum. In the meantime, the very real ecological and social catastrophes created by the mass production of livestock fester—and “slaughter-free” chicken specials in Singapore aren’t up to the task of slowing them down.