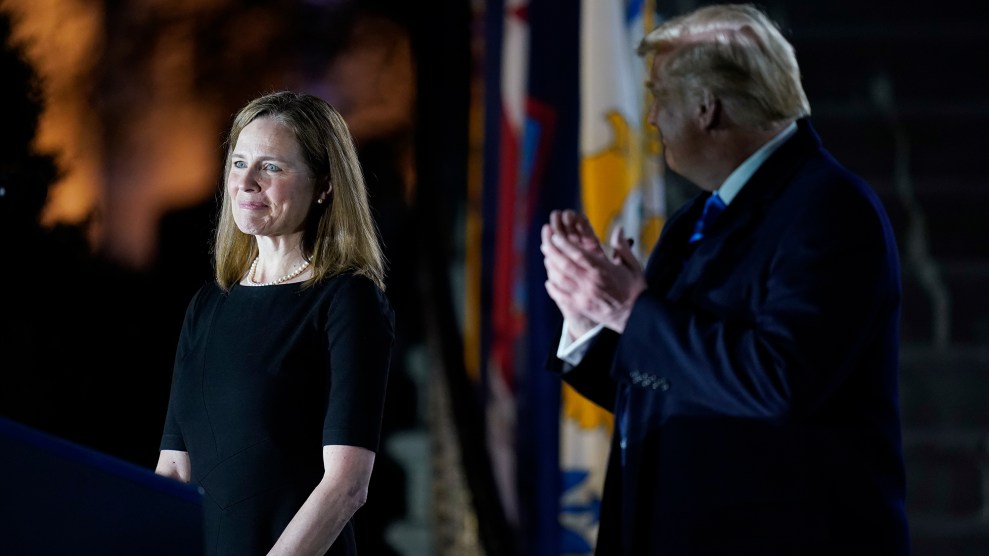 Amy Coney Barrett with then-President Donald Trump, shortly before her swearing in as a Supreme Court justice.Patrick Semansky/AP

Last fall, on the same day that the parties to the Paris Agreement gathered in Glasgow for their first day of their annual international climate meeting, the US Supreme Court announced it would review an appellate court decision about the Environmental Protection Agency’s authority to regulate greenhouse gases from fossil fuel power plants under the Clean Air Act.

Fast forward half a year: On February 28, the day that the UN Intergovernmental Panel on Climate Change (IPCC) issued its sobering report on climate adaptation and harms to human and planetary well-being, the court heard oral arguments in the case—West Virginia v. EPA.

Once again, it was a split-screen reality.

In reaction to the report, UN Secretary-General António Guterres stated, “Today’s IPCC report is an atlas of human suffering and a damning indictment of failed climate leadership. With fact upon fact, this report reveals how people and the planet are getting clobbered by climate change. Nearly half of humanity is living in the danger zone—now.

Many ecosystems are at the point of no return—now. Unchecked carbon pollution is forcing the world’s most vulnerable on a frog march to destruction—now.”

This reality doesn’t seem to have penetrated the high court’s marble walls. In questioning Solicitor General Elizabeth Prelogar about the extent of the EPA’s statutory authority, Justice Samuel Alito twice denied the reality of the climate emergency. “What weight do you assign to … climate change, which some people believe is a matter of civilizational survival?” And in a follow-up question, he again framed dangerous climate disruption in hypothetical terms, stating that he didn’t see how considering costs of regulation would limit the EPA’s authority “if you take arguments about climate change seriously, that this is matter of survival.” (Emphases added.)

Alito is apparently not among those “people” who view climate change as a global existential crisis.

In these statements, Alito acknowledges that, if you believe the scientific consensus that there is a climate crisis, then it would be illogical to fail to respond because the costs of human suffering would dwarf any costs incurred by the fossil fuel industry. That’s no doubt true, but as Prelogar deftly explained in response, there are significant statutory limits on the EPA’s ability to regulate regardless of the enormity of the air-pollution problem the agency seeks to address. The larger, more important, point here is that Alito is apparently not among those “people” who view climate change as a global existential crisis—and, tragically, he’s also a justice about to render a decision about the extent of the EPA’s climate authority.

So will Justice Amy Coney Barrett, who has also engaged in climate-crisis denialism. During her Senate confirmation hearing, she refused to accept that “climate change is happening and is threatening the air we breathe and the water we drink.” Rather, she suggested that the question was inappropriate. When asked by then Sen. Kamala Harris whether she considered coronavirus to be infectious, cigarettes to be carcinogenic, and climate change to be real, Barrett responded: “You have asked me a series of questions that are completely uncontroversial … and then trying to analogize that to elicit an opinion … from me on a very contentious matter of public debate, and I will not do that.”

Alarmingly, Barrett’s characterization suggests that she would deem many regulations aimed at responding to the climate crisis as attempts to address a so-called “major question” that agencies are supposedly without authority to address.

In recent shadow docket opinions, Alito, Barrett, and the four other conservative justices struck down rules of the Centers for Disease Control and Prevention and the Occupational Safety and Health Administration providing COVID-19 protections on major-questions grounds, in part due to the “controversial” nature of COVID-19 response measures. According to Barrett’s previously articulated position, this line of thinking could also be applied to climate protections.

In a recent commentary, I detailed the problems with the court’s grant of certiorari in West Virginia v. EPA and with the conservative justices’ specious use of the major questions “doctrine” to strike down agency authority in the COVID-19 cases.  In short, the danger of their use of the doctrine is that, under the guise of requiring that Congress answer the question rather than agencies, the court, the least accountable branch, in effect answers the question in favor of no action.

In the oral argument, some of the conservative justices’ indicated that they may be poised to use a strong version of the doctrine to prevent the EPA even from taking quite modest action in response to the climate crisis, such as the regulation of greenhouse gas pollution from fossil fuel power plants at issue in the case. Indeed, their questioning indicates that some of them may have determined that any regulations that might incentivize the shift away from fossil fuels would amount to answering a “major question” that agencies are without power to answer.

Meanwhile on the other screen, Daniel Kammen, a scientist who co-authored the IPCC report, stood outside the courthouse doors protesting the court’s anticipated ruling alongside other activists. “The Clean Air Act is our best and most effective tool to protect the environment; to promote racial, gender and socioeconomic justice; and to arm this country to be the leader on climate that President Biden has highlighted in his historic set of actions since he took office,” Kammen told reporters.