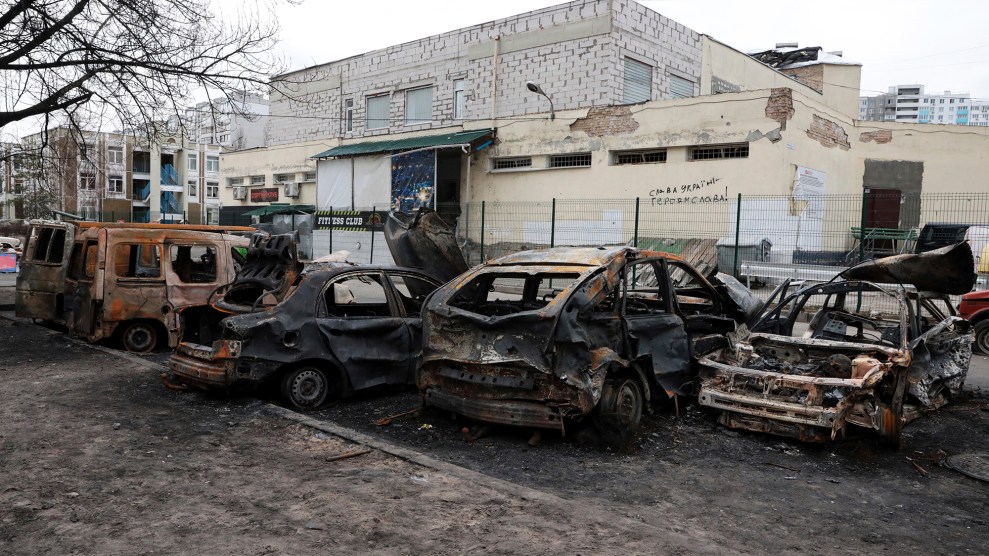 Cars destroyed by Russian shelling in Kyiv.Hennadii Minchenko/Ukrinform/NurPhoto via AP

For Svitlana Krakovska, Ukraine’s leading climate scientist, it was meant to be the week where eight years of work culminated in a landmark UN report exposing the havoc the climate crisis is causing the world.

But then the bombs started to crunch into Kyiv.

Krakovska, the head of a delegation of 11 Ukrainian scientists, struggled to help finalize the vast Intergovernmental Panel on Climate Change (IPCC) report ahead of its release on February 28 even as Russian forces launched their invasion. “I told colleagues that as long as we have the internet and no bombs over our heads we will continue,” she said.

But her team, scattered across the country, started to peel away—one had to rush to an air raid shelter in Kharkiv, others decided to flee completely, internet connections spluttered, one close friend of a delegate was killed in the fighting. International colleagues had to express their sympathies and press on with the report.

Krakovska’s four children sheltered with her in their Kyiv home as a missile struck a nearby building, emitting an ear-splitting roar. A fire from a separate strike sent up a plume of smoke that blotted the sky. “This blitzkrieg by [Vladimir] Putin is unbelievable, it is terrorism against the Ukrainian people,” she said.

Both the invasion and IPCC report crystallized for Krakovska the human, economic and geopolitical catastrophe of fossil fuels. About half of the world’s population is now acutely vulnerable to disasters stemming from the burning of fossil fuels, the IPCC report found, while Russia’s military might is underpinned by wealth garnered from the country’s vast oil and gas reserves.

“I started to think about the parallels between climate change and this war and it’s clear that the roots of both these threats to humanity are found in fossil fuels,” said Krakovska. “Burning oil, gas and coal is causing warming and impacts we need to adapt to. And Russia sells these resources and uses the money to buy weapons. Other countries are dependent upon these fossil fuels, they don’t make themselves free of them. This is a fossil fuel war. It’s clear we cannot continue to live this way, it will destroy our civilization.”

The IPCC report, described by António Guterres, the UN secretary general, as an “atlas of human suffering and a damning indictment of failed climate leadership,” is the most comprehensive catalogue yet of the consequences of global heating. Extreme heat and the spread of disease is killing people around the world, about 12 million people are being displaced by floods and droughts each year and the viability of food-producing land is shrinking.

“This moment is a clarion call for the urgent need to transition to domestic clean energy.”

But it is the conflict in Ukraine that has caused western governments to hastily attempt to untangle themselves from a reliance upon Russian oil and gas. The EU, which gets about 40 percent of its gas supply from Russia, is working on a plan to rapidly upscale renewable energy, bolster energy efficiency measures and build liquified natural gas terminals to receive gas from other countries.

Joe Biden, meanwhile, has relented to pressure from US lawmakers to ban imports of Russian oil. The ban, he said on Tuesday, will deliver a “powerful blow to Putin’s war machine. We will not be part of subsidizing Putin’s war.” Biden said the US will work with Europe on a long-term plan to phase out Russian oil and gas.

The halting of imports was urged in an emotional appeal to members of Congress by Volodymyr Zelenskyy, the Ukrainian president, and is backed by a bipartisan majority of lawmakers. “It’s basically foolish for us to keep buying products and giving money to Putin to be able to use against the Ukrainian people,” said Sen. Joe Manchin, a centrist Democrat.

Others see the ban as a moment to decisively break from fossil fuels altogether. “This moment is a clarion call for the urgent need to transition to domestic clean energy so that we are never again complicit in fossil-fueled conflict,” said Ed Markey, a progressive Democratic senator who was a driving force behind the Green New Deal agenda.

But in a stark demonstration of how deeply embedded fossil fuels remain in decision making, Biden’s administration has awkwardly attempted to extol its efforts to confront the climate crisis while also boasting that the US is now drilling more oil than even under Donald Trump to show it is cognizant of public anguish over rising gasoline prices, a perennial political headache for presidents.

“We don’t have a strategic interest in reducing the global supply of energy,” Jen Psaki, the White House press secretary, said last week. “That would raise prices at the gas pump for the American people, around the world, because it would reduce the supply available.”

While the US takes a relatively small amount of oil from Russia—only about 3 percent of all oil imports—experts say it is telling that an administration vocal about the need to reduce fossil fuels has found it difficult to cut itself from its dependency on oil and gas.

“It’s a crude oversimplification to call this a fossil fuel war, that’s a little too glib,” said Jonathan Elkind, an expert in energy policy at Columbia University and a former energy adviser to Barack Obama’s administration. “But it’s an undeniable reality that Russia gets a significant share of its revenues from oil and gas and that America’s gasoline habitat contributes towards the global demand for 100m barrels of oil each day.

“Do we want to find ourselves 10 years from now where we’ve bent the curve on oil consumption and emissions towards decarbonization, or do we want to sit there and think ‘where did the last 10 years go?’ If the US isn’t a part of the solution we will put in peril our influence on the world stage and the fate of everyone, both here and around the globe.”

While Europe belatedly attempts to wean itself off Russian gas, efforts to phase down fossil fuels in the US have faltered. Biden’s legislative plan to drastically ramp up renewable energy is moribund in Congress, largely thanks to Manchin, while the conservative-leaning supreme court is mulling whether to weaken the administration’s ability to regulate coal-fired power plants.

“The fossil fuel industry’s so-called solution to this crisis is nothing more than a recipe to enable fossil-fueled fascists.”

The invasion of Ukraine has also triggered a push by the US oil and gas industry and its allies in Congress to loosen regulations to allow more domestic drilling. Manchin, chair of the Senate energy committee, has said that delaying new gas pipelines when “Putin is actively and effectively using energy as an economic and political weapon against our allies is just beyond the pale.” Even Elon Musk, founder of Telsa, has said that “we need to increase oil and gas output immediately. Extraordinary times demand extraordinary measures.”

The White House has pointed out that the industry is already sitting on a huge number of idle drilling leases—a total of 9,000 unused permits covering 26m acres of American public land—while environmentalists argue the crisis highlights the dangers of being at the mercy of a volatile global oil price, now near an all-time high, rather than shifting towards solar, wind, and other sources of clean energy.

“The fossil fuel industry’s so-called solution to this crisis is nothing more than a recipe to enable fossil-fueled fascists like Vladimir Putin for years to come,” said Jamal Raad, executive director of Evergreen Action. “As long as our economy is dependent on fossil fuels, we will be at the mercy of petro-dictators who wield their influence on global energy prices like a weapon. “American-made clean energy is affordable, reliable and free from the volatility of oil and gas markets. The best way to weaken Putin’s grip on the global energy market is to get America off of fossil fuels.”

In Kyiv, Krakovska has said that she will stay in her home city as the Russian army advances, having declined offers to relocate to foreign research institutions. “I know that’s what Putin wants, for us to flee Ukraine so they can have our beautiful country,” she said. “I have told scientists in other countries I will collaborate with them, but from an independent and free Ukraine. I couldn’t be in another place knowing that Kyiv was in the hands of those barbarians.”