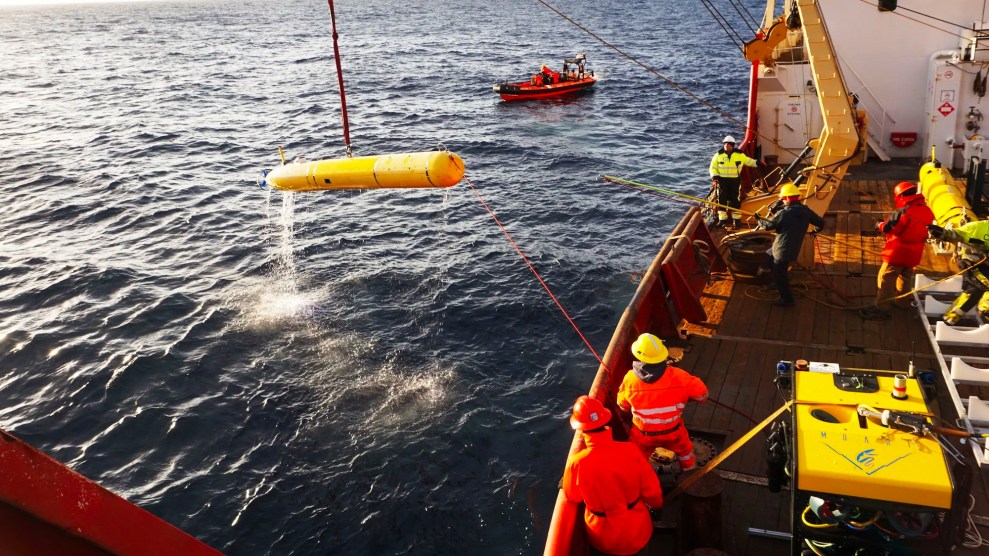 Around 20,000 years ago, the world was so frigid that massive glaciers sucked up enough water to lower sea levels by 400 feet. As the sea pulled back, newly exposed land froze to form permafrost, a mixture of earth and ice that today sprawls across the far north. But as the world warmed into the climate we enjoy today (for the time being), sea levels rose again, submerging the coastal edges of that permafrost, which remain frozen below the water.

It’s a huge, hidden climate variable that scientists are racing to understand. They know full well that the destruction of terrestrial permafrost is a significant source of carbon entering the atmosphere. As it thaws, microbes munch on the organic matter it contains, releasing carbon dioxide (if the material is fairly dry) and methane (if the melted ice forms a pond). This can form a feedback loop, in which more permafrost thaw produces more emissions, which heat the planet to thaw even more permafrost. That’s an extra-big problem because the Arctic is now warming four times as fast as the rest of the planet.

Yet submarine permafrost is largely unstudied, owing to its inaccessibility—renting out time on a research vessel is not cheap anywhere, much less in the Arctic, and it’s much harder to reach for drilling samples. Now, in an alarming paper published last week in the Proceedings of the National Academy of Sciences, an international team of scientists give us a rare look at what’s going on down there. The team used oceanic robots, which look like torpedoes, off the coast of northern Canada and mapped the seafloor with sonar. The scientists repeated this several times over the course of nine years to get a sense of how the topology of the seafloor might be changing and found that it’s undergoing massive upheaval.

The result is the worrisome image shown above—a massive sinkhole indicating that the subsea permafrost has thawed and collapsed. This sinkhole is a giant among dozens of pockmarks the researchers found on the seafloor. Scientists have already documented this violent phenomenon, called thermokarst, on land. Because permafrost is made of soil suspended in a matrix of frozen water, when it thaws the land shrinks, gouging massive holes across the Arctic landscape. And as these images of the seafloor show, it’s also happening underwater.

“I think it’s just absolutely remarkable that there are places on the seafloor where changes of this scale are happening at this rate,” says Monterey Bay Aquarium Research Institute marine geologist Charlie Paull, a coauthor on the paper. The entire survey covered an area that’s half the size of Manhattan and tallied 40 holes. (You can see a portion of the area in the image below.) The giant one, he says, “is equivalent to a whole New York City block composed of six-story apartment buildings.”

Why is this happening? On land, permafrost is thawing because temperatures are rising. But, Paull says, there’s no evidence that seafloor temperatures are rising enough to initiate thaw. So it’s likely that thaw isn’t starting from above, but from below. Submarine permafrost forms a thick wedge of perhaps several hundred meters, says Paull. Beneath that runs relatively warm groundwater, which can degrade the permafrost. “If it’s pure permafrost ice, it’ll produce voids that subsequently collapse,” he says. “And so we’re inferring that the voids that we’re seeing developing in this environment are a consequence of the long-term warming that the seafloor in this area has experienced.”

“Once the systems are in motion, we have very little ability to change the direction of it…like a boulder that you push off the top of a mountain.”

That long-term bit is important. Unlike rapid thaw on land, the degradation of this submarine layer has probably been unfolding over much longer timescales—a lingering effect of how much the world has warmed since the last ice age. “I think that the biggest lesson from this paper is a reminder of how long these systems take to respond,” says Ben Abbott, who studies permafrost at Brigham Young University but wasn’t involved in the research. “You could maybe misinterpret that to say, ‘Oh, there’s nothing to worry about.’ I actually take exactly the opposite conclusion. Once the systems are in motion, we have very little ability to change the direction of it. It’s not a car with a steering wheel—this is more like a boulder that you push off the top of a mountain.”

While this undersea thawing is likely driven by long-term processes, scientists are concerned it could accelerate because the Arctic is now warming so quickly. Ocean circulation patterns might change, too, bringing in yet more warm water. “So the kind of long-term change that we’re observing right now could be accelerated quite soon by human interference on the climate,” says Abbott.

Two big unknowns are how much submarine permafrost exists, and how much greenhouse gas it holds. Scientists can’t take samples of every square foot of Arctic seafloor, so instead they look backward, comparing how much land was exposed during the last glacial maximum thousands of years ago to how much is exposed today. This gives them an idea of how much permafrost may have formed and then submerged when the glaciers melted and the sea rose to its present level. Estimates vary, but there may be around 775,000 square miles of submarine permafrost, sequestering perhaps hundreds of gigatons of organic carbon and tens of gigatons of trapped methane.

Methane is a serious climate threat, as it is 80 times as potent a greenhouse gas as CO2 (although it disappears from the atmosphere much faster). In terrestrial permafrost, it’s produced when microbes have wet organic material to chew on—and obviously the seafloor is rather wet. But submarine methane also comes from underlying deposits of natural gas that have leaked upwards and gotten trapped in a latticework of frozen water, a solid known as methane hydrate. (It’s basically gassy ice; it’ll even ignite.) These molecules are “sitting there just waiting for a temperature threshold to be crossed, and then they can be released quite dramatically,” says Abbott.

As methane releases from submarine permafrost, microbes in the sediment and water column process it into CO2. “That’s been described as this ‘microbial cap’ that is protecting us from this methane release because it transforms that very potent greenhouse gas, methane, into a less potent gas, CO2,” says Abbott. “But there are questions about if we have a massive collapse of subsea permafrost—like what’s described in this paper—maybe we’re going to get more methane released in bubbles. That bubbling short-circuits that microbial oxidation of the methane and releases it straight to the atmosphere.”

It’s hard to say exactly how the thaw might play out because submarine permafrost is a sort of time capsule and can’t be compared directly to permafrost on land. “It’s this ancient, legacy environment that has been essentially cut off by expansion of those seawaters,” says Merritt Turetsky, an ecologist at the University of Colorado Boulder who studies permafrost but wasn’t involved in the new paper. But when you combine potential undersea releases with the volume of gases already known to be released from the land—which Turetsky says is like “like adding another industrialized nation to the world”—the climate effect could be substantial.

“We like to say what happens in the Arctic doesn’t stay in the Arctic,” she says. Think of the region as Earth’s freezer, which has locked away carbon for millennia. “We’re now pulling the plug of the freezer out of the wall,” Turetsky says. “We’ve got this hot spot of warming that has been a climate-cooling hero for thousands of years but now has the potential to actually release all of that stored carbon back into the atmosphere.”