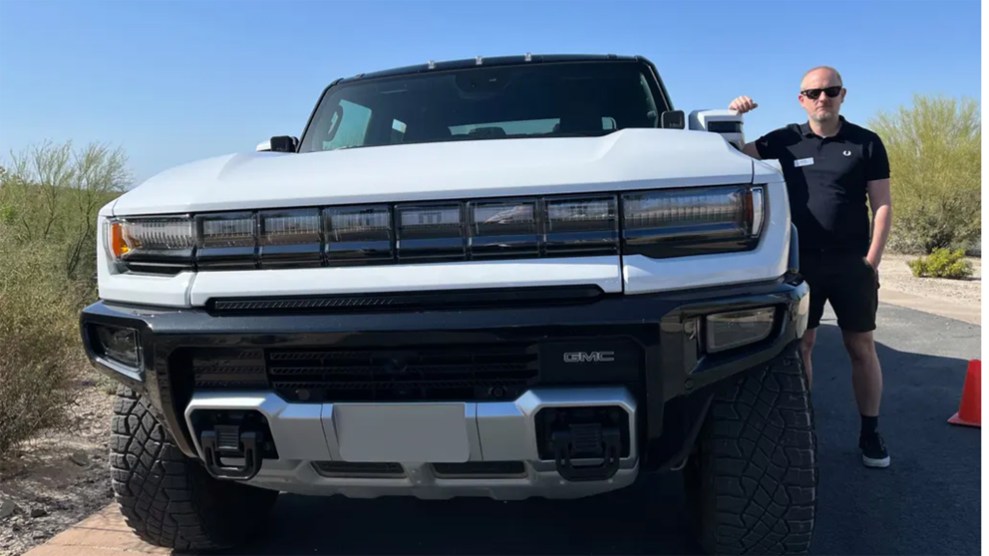 The author with an EV Hummer.Oliver Milman

This story was created by the Guardian and is reproduced here as part of the Climate Desk collaboration.

It is the weight of an elephant, can move like a crab and in a previous life was reviled by environmentalists. The Hummer, that avatar of gas-guzzling machismo, has returned as an electric vehicle with an unlikely billing as an ally in the effort to avert the worsening climate crisis.

The reincarnation of the hulking pickup truck, test-driven by the Guardian in the searing heat of Arizona, has been lauded by manufacturer General Motors as proof that electric vehicles can now reach even middle America’s most obdurate devotees of supersized car culture.

GM hopes to crush, under a brawny Hummer wheel, the notion that green cars must look like a Prius. “We want to turn EV skeptics into EV believers,” said Mikhael Farah, a GM spokesperson. This Hummer has even been endorsed as a climate boon by the White House—in November, Joe Biden screeched around GM’s Detroit plant in a Hummer EV. “This sucker is something else!” the president, a self-confessed “car guy,” exclaimed.

It’s a startling reframing of a brand that was spawned from a spartan, military-grade Humvee and became a sort of muscular invading force on roads in the early 2000s. Arnold Schwarzenegger, before he started issuing earnest warnings about climate change, championed it. Boxy and unrefined, the Hummer embodied an outlandishly masculine aesthetic that seemed to almost revel in its gargantuan fuel consumption.

In 2003, dozens of Hummers were vandalized and set on fire by environmentalists in Los Angeles.

Even in an era when the size of cars has been put on steroids, concerns over the climate crisis made the Hummer a standout, cartoonish villain. In 2003, dozens of Hummers were vandalized and set on fire by environmentalists in Los Angeles, with many of the vehicles spray-painted with the words ‘‘gross polluter’’ and ‘‘fat, lazy Americans”. In 2010, the Hummer was discontinued.

The electric resurrection of the Hummer, first announced in 2020, has produced a vehicle that does not emit the carbon pollution that overheats the planet nor many of the other toxins that routinely kill thousands of Americans, and millions worldwide, who inhale befouled air.

But in many ways it still pushes the boundaries of absurdity. The vehicle weighs more than 4.5 tons, a bulk closer to that of a small bulldozer than the sort of cars typically seen on American streets a decade or so ago. The huge Ultium battery that powers the vehicle is nearly 3,000 lb, about the same as two grand pianos. The wheels look like they could traverse Mars.

The big display panel in the chunky interior of the Hummer does, indeed, show a graphic of the car on Mars when you put it in its off-road mode. Most trips are on roads, of course—almost half of car journeys in US cities are three miles or less—meaning Hummer drivers will be piloting a metal behemoth weighing the same as a young blue whale when popping out to get some milk. “The Hummer is a niche statement of excess,” according to Daniel Sperling, director of the Institute of Transportation Studies at the University of California, Davis.

Hummer drivers will be piloting a vehicle the same weight as a young blue whale when popping out to get some milk.

The price of the first Hummer EV iteration—subsequent models will be cheaper—is a princely $110,000. About 66,000 people have put in an order for a pickup or SUV version of the Hummer and while GM says most have never owned an EV before, many are also simply adding it as a second or third vehicle, somewhat negating the climate benefits. “It’s huge, it’s terribly expensive and it doesn’t fit every lifestyle,” said Carla Bailo, chief executive of the Center for Automotive Research. “GM won’t overproduce it because there’s a limited base of people who will want it.”

On its own terms, however, the Hummer EV is an adroit piece of engineering. Fully charged, the battery will propel the vehicle 329 miles before a top-up is needed. The Hummer is smoothly powerful in rocky terrain, with the test drive showcasing its ability to effortlessly traverse plunging, pitted trails in the cacti-dotted desert west of Phoenix.

The task is aided by a wealth of technology—the Hummer has 18 different camera angles from below and around the vehicle you can view via the screen, as well as an innovation called “crabwalk,” where each of the tires are set at a 10-degree angle to allow for a sort of sliding, diagonal movement to maneuver away from precipitous edges of tracks.

On the flat there is raw pace, too, with the instant response of electric acceleration hurling the Hummer forward from a standstill to 60mph in three seconds, a speed that can cause passengers and drivers alike to emit a yelp of surprise.

Inside, the Hummer EV is more comfortable than the original and features designs of the moon’s topography—a nod to GM’s role in creating a lunar-roving buggy, which of course was electric—but it maintains a certain butch aesthetic. This points to the Hummer’s broader significance—a demonstration that electric vehicles can now provide the sheer power, size and sensibilities that US buyers cherish, even if they still command only a small fraction of sales.

“What we wanted to do is get a truck buyer who would never buy an EV in his life, or never even think about it,” said Brian Malczewski, a chief exterior designer of the new Hummer. “We’re hoping to get, finally, the truck buyers who may be the hardest people to get into this space. This is the perfect conduit for that, I think.”

GM is not alone in attempting this. Ford has announced an electric version of its F-150 truck, which has been the best-selling vehicle in America since Ronald Reagan was president, Tesla has its much-hyped Cybertruck and newcomers such as Rivian have garnered plenty of attention. At a different end of the market, you will even be able to get an electric Maserati this year, even if the price, like many EVs, is eye-watering.

“I think electric power trains for heavier work trucks, SUVs and pickups, like the Hummer, will be amazing.”

“I think electric power trains for heavier work trucks, SUVs and pickups, like the Hummer, will be amazing,” said Chris Gearhart, director of NREL’s Center for Integrated Mobility Sciences. “The torque profile of an electric motor will give these vehicles a lot of towing power, and the potential for using some of the electrical power in the batteries to directly power worksites and provide backup power could make these vehicles incredibly useful.”

While EV options are expanding, it’s still unclear whether production levels, and sales, will ramp up with the urgency of the climate crisis. GM has vowed to sell 1 million EVs in 2025 before going all-electric a decade later but delivered only 26 electric cars to customers in the final quarter of last year. Toyota wants to sell 3.5 million EVs annually by 2030 but currently has none for sale in the US. Public charging infrastructure, meanwhile, remains spotty across the US and Biden’s attempt to fund 500,000 new chargers has yet to be fulfilled by Congress.

Phasing out gasoline cars by 2035, which the US must do if it is reach net zero emissions by 2050 and help avoid climate catastrophe, remains a steep challenge but several experts say replacing them with similar electric alternatives will be the quickest and most pragmatic way of slashing emissions from car-dominated American life.

“EVs are by far the best and most [economical] way to reduce greenhouse gases in transportation,” said Sperling. He added that better public transport, cycle paths and denser housing would be beneficial too but these actions are “far less important for reducing greenhouse gases, at least in the US and other affluent car-centric countries.”

Others argue for a more fundamental change that moves people out of cars altogether, rather than simply replacing one type of large vehicle with another. Last month, Harvey Miller was crossing the road in Columbus, Ohio, when he was knocked to the ground by an SUV, leaving him bruised. Miller said the “mortified” driver, who said she hadn’t seen him, fortunately stopped the car before crushing him to death.

Miller was walking home from Ohio State University’s campus where, ironically, he teaches classes on transportation safety and urban mobility. The incident underlined to him the lingering problems of America’s fixation upon wide highways, sprawling suburbs and huge vehicles, even if EVs do become the norm.

SUVs are far more likely to kill pedestrians than cars, research has found, due to blind spots from the elevated seating position and bulky front ends that strike people high in the torso and head rather than lower in the body. Their ubiquity in American life can also crowd out or scare away those seeking other ways of getting around.

“The Hummer scares me—it’s massive and not compatible with life in cities,” Miller said, adding that SUVs also can be dangerous. “These large vehicles use up a lot of space and are expensive. I’m disappointed that Biden is championing them and not other forms of mobility, such as walking and biking infrastructure. Cars should fill in the niches for some people, not be the default.”

“I’m not against EVs—they are the future, but you’ve got to support buses, walking and cycling too or it’s like rearranging the deckchairs on the Titanic. People need options. Unfortunately, car culture is so ingrained that even painting a bike path can get a huge amount of pushback.”