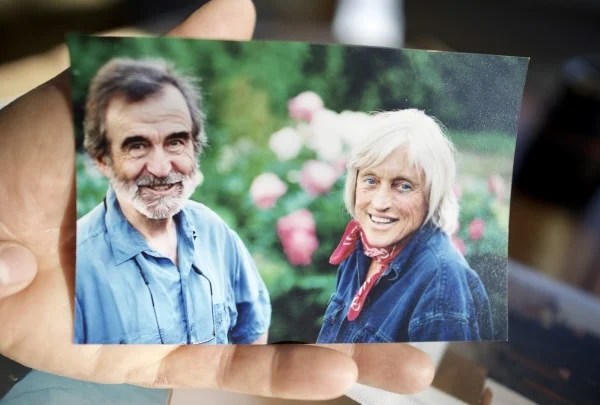 A handful of soil, swept to the ground with indifference, was enough to make Céline Caron flinch.

It was June 2013. Caron, a Quebec farmer, environmentalist and one of my father’s closest friends, was enjoying a fresh-picked radish salad outside the house she had shared with her husband, Yves Tessier, for over 40 years. Beside her, on the front seat of a golf cart she used to get around the farm, was a half-teaspoon of dirt that she intended to return to her garden after the day’s heat passed.

A few minutes later, Françis Naud, the septuagenarian couple’s full-time helper, arrived to borrow the cart and swept the dirt aside as he sat on the front seat. Only when Caron’s piercing blue eyes widened in shock did Naud realize his mistake.

“She was hit with a moment of panic to see that the half-teaspoon of soil wouldn’t return to the garden,” he recalled over the phone late last year. “She wanted to bring the soil back to the garden. It was maybe a bit of an intense reaction, but that was her.”

I chuckled: I grew up hearing stories about Caron’s devotion to dirt. She had devoted her life to protecting the microbes, fungi, and other organisms that inhabit healthy soils. Every tree or seed planted on the couple’s land was chosen to maximize soil health. They purchased little. Almost nothing went to waste. Even their food—nearly all homegrown—was chosen with the soil in mind.

They were at once behind and ahead of their time. Indigenous people and peasant farmers worldwide have for generations judiciously used crops and forestry practices to protect soil health, now commonly known as regenerative agriculture.

But in 1971, when Caron and Tessier bought their land, most farmers, governments, food companies, and scientists belittled these ancient techniques. The so-called Green Revolution was in full swing and farmers were rushing to industrialize. Government policies focused exclusively on boosting yields. Toxic pesticides and fertilizers became commonplace, especially in wealthy, industrialized countries like Canada have wreaked ecological havoc. Artificial fertilizers have degraded huge swaths of farmland, leaving it infertile while choking rivers, lakes, and oceans with toxic algae blooms. Insect populations are plummeting, in part because of pesticides. According to the Intergovernmental Panel on Climate Change, food production accounts for roughly a quarter of anthropogenic greenhouse gas emissions, with nitrogen fertilizers and industrial-scale meat consumption largely to blame.

I have always known Caron and Tessier. My dad was one of the couple’s lifelong friends, having met Caron in his home province of Quebec when he was still in college. They skied together, going on expeditions in the boreal forests north of Quebec City and Montreal with Tessier, or tearing down the mountainside at the ski resort of Mont St-Anne. They stayed close through the years, even when he moved to the East Coast with my mum soon before I was born, and after a debilitating infection left Caron partially paralyzed in the early 1990s.

I remember them as earthy and wise. Patient. Bestowed with understated humor. Wisps of white hair framed Caron’s tanned face and sapphire eyes, which retained a unique magnetism despite her illness. Tessier, a cardiologist and self-taught farmer, was quieter, with a calming smile and easy laugh. His weathered hands were equally at ease in the earth as they were in the operating theatre. Both had emanated an inner peace worthy of the Dalai Lama.

I saw them once a year, during my family’s 1,000-kilometer Christmas pilgrimage back to Quebec. Each year, my parents and their close friends rented a 400-year-old farmhouse in Charlevoix, on the St. Lawrence River’s north shore. Caron and Tessier usually arrived near midday on New Year’s Eve in a battered VW Westfalia van, boxes of their homegrown food and cooking utensils crammed in the back. Every year, we welcomed the couple’s homegrown carrots, beets, garlic, squash soup, and alfalfa sprouts as particularly special gifts.

“Their gardens were like their children,” explained Renée Frappier, a pioneering Quebec advocate for vegetarian food and one of their longtime friends. “They didn’t have children, so their carrots, their vegetables, were their children, and the soil was their family.”

“They didn’t have children, so their carrots, their vegetables, were their children, and the soil was their family.”

Because I grew up in Nova Scotia and visited Quebec in winter, the first and only time I saw Caron and Tessier’s farm in bloom was on a searing spring day in 2015. The trees had leafed out, hiding their house from the potholed highway and surrounding it with a jungle of trees and bushes. Chickens pecked at the small, grassy clearing outside their bungalow. A bright orange tractor was parked in the ramshackle tool shed attached to one of the building’s outer walls.

Entering was like being transported to another world: A well-loved wooden counter cluttered with Mason jars full of flour and beans and spices and more dry goods lined one wall. Knives shaved thin from decades of sharpening rested in the sink. A wooden bowl held an ulu—they used the traditional half-moon-shaped Inuit knife to mince garlic. Wooden frames backed with mosquito netting covered in dry herbs and vegetables lined the ceiling, and a solarium at the front of the house held row upon row of seedlings and microgreens. Caron sprouted beans in the bathtub for the chickens—payment, she joked, for the eggs and fertilizer they provided.

Tessier was eager to show me the farm. I walked beside him as he wrangled his wife’s golf cart up a grassy, tree-lined path towards the gardens. He’d recently been diagnosed with lung cancer and walking in the heat was becoming difficult for him. The forest soon opened, and we followed the edge of a hayfield and contoured a hand-built irrigation pond. Beside the road stretched long beds full of vegetables—peas, greens, tomatoes—vines and rows of pear and apple trees. It was feral pastoralism; an unruly natural dance Caron had choreographed into producing food.

The farm had not always been an oasis for nature. Like most plots of land in this part of Quebec, theirs was a long, thin rectangle that reached back from the St. Lawrence, a relic of the colonial land grant French colonizers imposed on this patch of Wendake-Nionwentsio traditional territory. When Caron and Tessier bought the property in 1971, it was a patchwork of threadbare meadows, sugar bush, and potato fields. The soil was worn thin after years of overgrazing, haying, and pesticide and fertilizer use.

Photos that Francis showed me last winter from the farm’s early days show them lithe, strong, in love, and determined to transform their land into a biological haven. By the time they died over 40 years later, they had created a forest home to over 50 different species of vegetables, dozens of varieties of fruit trees, and a forest packed with maples and walnut trees.

Karen Ferland, one of the couple’s former interns, recalled that Caron had an uncanny ability to work harmoniously with nature. She had never been formally trained in agriculture, honing her skills by collaborating with researchers, reading for hours every day, and observing nature. I remember Caron being happiest watching nature outside, even if it meant bundling up in her Arctic parka to sit on the porch for hours on frigid midwinter days.

Through journals, the draft of Caron’s unpublished book and even their will, the couple charted how they tried to preserve biodiversity-friendly plants like milkweed — the endangered monarch butterfly’s favorite food — and regenerate the land by planting thousands of trees. They built a garden replete with sunflowers and greens big enough to keep them fed, and nursed apple and pear trees and grapevines. At the time, no one grew most of these varieties in that part of Quebec, where winter temperatures can dip below -30 C.

Caron relied on a host of regenerative techniques at a time when they were shunned by conventional farmers. She planted cover crops of alfalfa and clover to fix nitrogen and keep fallow fields covered year-round. It was an uncommon technique at the time, but now is endorsed by the federal government and many conventional farmers. She kept chickens, goats and other animals for their manure, but also because they helped aerate the soil and provided food — an approach backed by the UN Food and Agriculture Organization. And like contemporary regenerative farmers, she did everything possible to protect soil health.

Still, the gardens paled in comparison with the forest they planted at the back of their land. Growing up, my dad told stories about the forest from a field, but I didn’t realize its scale—huge —or why Caron cared so much for trees until recently. Forests, she believed, were essential to healthy soils because they fostered especially vibrant soil ecosystems, thus increasing the nutrients available to crops and other plants. Together with the late Laval University forestry professor Gilles Lemieux, she spent years testing if rameal fragmented wood, or wood chips made from the nutrient-rich tips of deciduous tree branches, could regenerate threadbare land.

The experiments worked. A people-lover keen to share her knowledge, she traveled to farming conferences in Quebec and elsewhere to preach that the mulch was key to a sustainable and self-sustaining livelihood. And every year for decades, she would join Tessier and a crew of friends and family to collect scrub branches Hydro-Québec cut back on a powerline right-of-way that cut across the couple’s land.

Wood, left to rot by a power utility, was their regenerative gold.