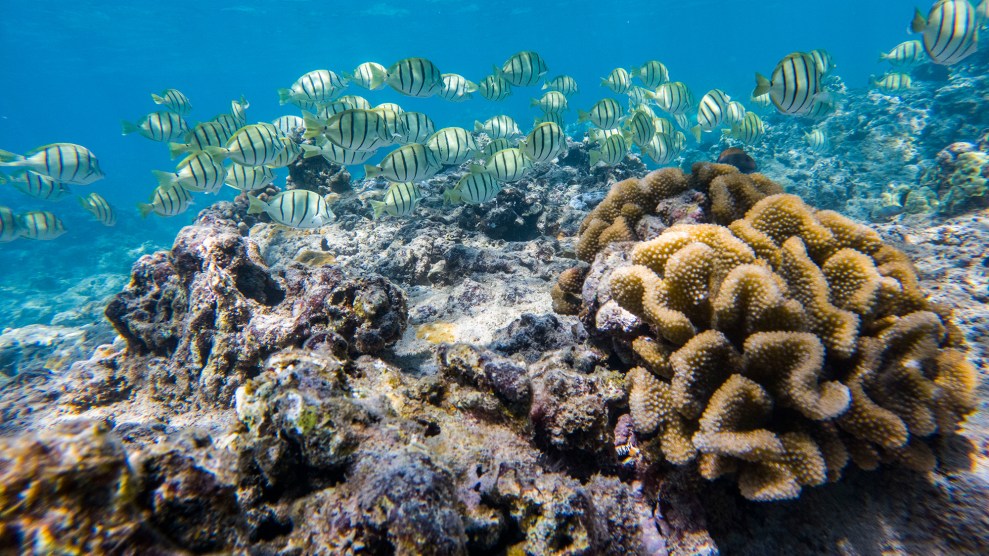 This story was originally published by Guardian and is reproduced here as part of the Climate Desk collaboration.

Global heating is causing such a drastic change to the world’s oceans that it risks a mass extinction event of marine species that rivals anything that’s happened in the Earth’s history over tens of millions of years, new research has warned.

Accelerating climate change is causing a “profound” impact upon ocean ecosystems that is “driving extinction risk higher and marine biological richness lower than has been seen in Earth’s history for the past tens of millions of years,” according to the study.

The world’s seawater is steadily climbing in temperature due to the extra heat produced from the burning of fossil fuels, while oxygen levels in the ocean are plunging and the water is acidifying from the soaking up of carbon dioxide from the atmosphere.

Marine conditions, the researchers said, are reminiscent of the mass extinction that occurred at the end of the Permian period.

This means the oceans are overheated, increasingly gasping for breath—the volume of ocean waters completely depleted of oxygen has quadrupled since the 1960s—and becoming more hostile to life. Aquatic creatures such as clams, mussels and shrimp are unable to properly form shells due to the acidification of seawater.

All of this means the planet could slip into a “mass extinction rivaling those in Earth’s past,” states the new research, published in Science. The pressures of rising heat and loss of oxygen are, researchers said, uncomfortably reminiscent of the mass extinction event that occurred at the end of the Permian period about 250m years ago. This cataclysm, known as the “great dying,” led to the demise of up to 96 percent of the planet’s marine animals.

“Even if the magnitude of species loss is not the same level as this, the mechanism of the species loss would be the same,” said Justin Penn, a climate scientist at Princeton University who co-authored the new research. “The future of life in the oceans rests strongly on what we decide to do with greenhouse gases today. There are two vastly different oceans we could be seeing, one devoid of a lot of life we see today, depending on what we see with CO2 emissions moving forward.”

Truly catastrophic extinction levels may be reached should the world emit planet-heating gases in an unrestrained way, leading to more than 4C of average warming above pre-industrial times by the end of this century, the research found. This would trigger extinctions that would reshape ocean life for several more centuries as temperatures continue to climb.

But even in the better case scenarios, the world is still set to lose a significant chunk of its marine life. At 2C of heating above the pre-industrial norm, which is forecast as likely even under current climate pledges by the world’s governments, around 4 percent of the roughly two million species in the oceans will be wiped out.

Fish and marine mammals that live in polar regions are most vulnerable, according to the study, as they will be unable to migrate to suitably cooler climes, unlike tropical species. “They will just have nowhere to go,” said Penn.

The threat of climate change is amplifying the other major dangers faced by aquatic life, such as over-fishing and pollution. Between 10 percent and 15 percent of marine species are already at risk of extinction because of these various threats, the study found, drawing upon International Union for Conservation of Nature data.

John Bruno, a marine ecologist at the University of North Carolina who was not involved in the study, said the new research appeared “sound” but it differed from previous studies on the topic that suggest species will mainly disperse to new areas rather than be completely snuffed out.

“It’s very different from what most prior work has developed. But that doesn’t mean they are wrong,” Bruno said. “I think this new work is challenging some of our current assumptions about the geographic patterns of looming extinction in the ocean.”

Bruno said that while mass extinctions are likely from extreme heating in the future, the current impacts from climate change and other threats should be concerning enough for policymakers and the public.

“Personally, I’m a lot more worried about the ecosystem degradation we’re already seeing after less than 1C of warming,” he said. “We don’t need to look to a world so warmed over humanity has been wiped out—we’re already losing untold biodiversity and ecosystem functioning with even the relatively modest warming of the last 50 years.”