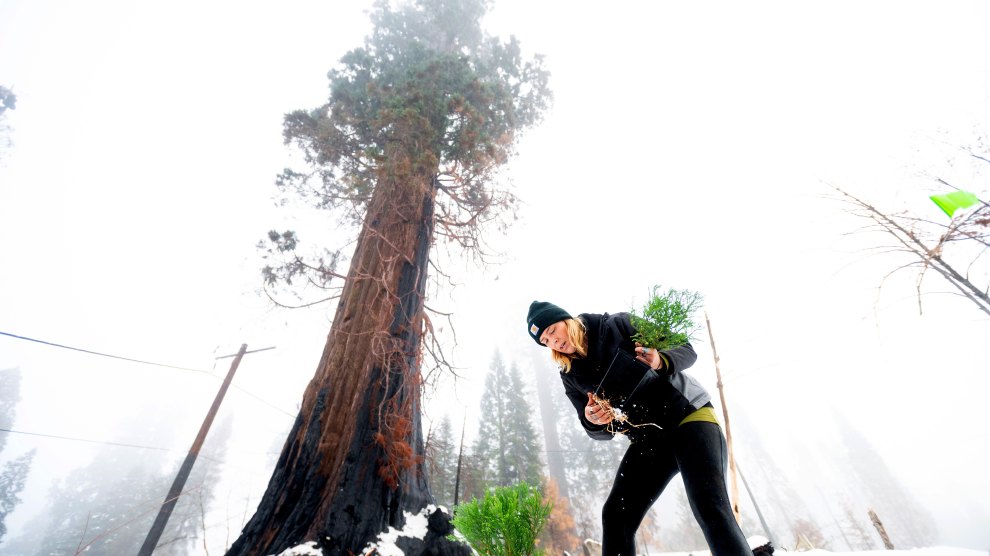 Few experiences have rendered me as awestruck as the winter morning I spent wandering through a grove of ancient sequoias, their sienna bark glowing against the snowy ground. They’re the world’s largest trees, spanning up to 36 feet in diameter and more than 250 feet in height. And they’ve been known to live for 3,400 years. But fewer and fewer of them are getting the chance to make it that long: In the past two years, three massive wildfires that roared through the western slope of California’s Sierra Nevada mountains torched thousands of sequoias. The damage was so severe, experts estimated, that almost a fifth of the planet’s sequoias died or suffered terminal burns during the blazes.

Almost a fifth of the planet’s sequoias died or suffered terminal burns during recent fires.

Sequoias have adapted to live with fire, and their thick bark usually protects them from damage. So the tremendous losses in the past few years can’t be chalked up to bad luck: Since 2015, according to a National Park Service report, there has been a “dramatic increase” in severe wildfires in sequoia country due to hotter, drier conditions linked to climate change.

The Biden Administration is taking note. On April 22, the president signed an executive order aimed at protecting the United States’ forests, especially old-growth forests like the ancient sequoia groves. Among other things, the order directs the Department of the Interior to inventory the old-growth forests on federal lands over the course of the next year, and identify the threats to these trees along with ways to better safeguard them. (One such measure includes prescribed burning, a practice that Indigenous tribes have relied on for centuries to prevent catastrophic wildfires.) The order also sets targets for reforesting federal lands by 2030 and helping curb deforestation around the world.

Biden isn’t just drawn to protecting old trees because of their beauty, or the way they nourish biodiversity; his interest in them is directly tied to his climate goals. As his Earth Day directive states, forests “play an irreplaceable role in reaching net-zero greenhouse gas emissions.” Old-growth trees serve as carbon sinks, keeping carbon dioxide emissions out of the atmosphere. The United States’ temperate forests offset about 14 percent of the country’s carbon emissions every year. All trees do this, but the older, bigger ones do it particularly well. As one 2020 study on land east of the Cascades in Oregon and Washington found, large trees (those greater than 21 inches in diameter) made up only 3 percent of the total forest but stored 42 percent of the carbon.

The US’ temperate forests offset about 14 percent of the country’s carbon emissions every year.

But while Biden’s latest order makes strides toward conserving these ancient treasures, it doesn’t appear to take a step that many environmentalists and some politicians have been lobbying for: banning logging of old-growth forests on federal lands. The executive order references “supporting healthy, sustainably managed forests in timber communities”—code for supporting logging companies, which, as the Washington Post points out, are still permitted to harvest some old-growth trees on federal land in Oregon.

“Allowing logging of mature and old federal forests should become a practice of the past,” wrote members of Congress in a November 2021 letter to Secretary of Agriculture Tom Vilsack. While it will take time and significant funding to shift away from fossil fuels and flood the country with electric cars, they wrote, “protecting our natural carbon sinks represents a more straightforward climate solution.”