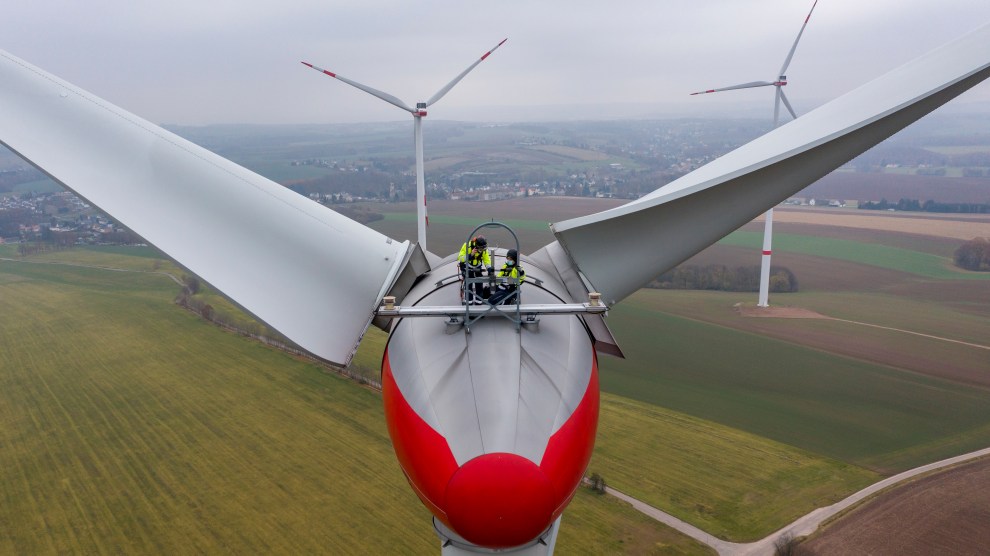 Maintenance workers see to an Enercon wind turbine in the German state of Saxony.Jan Woitas/dpa via ZUMA Press

The EU plans a “massive” increase in solar and wind power, and a short-term boost for coal, to end its reliance on Russian oil and gas as fast as possible.

In a plan outlined on Wednesday, the European Commission said the EU needed to find an extra €210 billion ($222 billion) over the next five years to pay for phasing out Russian fossil fuels and speeding up the switch to green energy.

Senior officials conceded that in the short term, the race to get off Russian gas would mean burning more coal and using nuclear energy. The plan, drawn up in response to the Kremlin-ordered invasion of Ukraine and subsequent soul-searching about Europe’s dependence on Russian gas, proposes upgrades to the EU green deal, the bloc’s flagship policy to confront the climate crisis.

The Commission proposed that 45 percent of the EU’s energy mix should come from renewables by 2030, an advance on the current 40 percent target suggested less than a year ago. Officials also want to cut energy consumption by 13 percent by 2030 (compared with 2020), in comparison with the current proposal of a 9 percent saving.

The Commission proposed that 45 percent of the EU’s energy mix should come from renewables by 2030.

“It is clear we need to put an end to this dependence and a lot faster before we had foreseen before this war,” said Frans Timmermans, the EU official in charge of the green deal. Contrasting the call to find €210 billion to spend on new energy infrastructure, including windfarms and solar panels, he said the EU was spending €100 billion a year on Russian fossil fuels. “Speeding up the transition means that money can stay in Europe, can help bring down the energy bills of European families and will not be used to finance this barbaric war in Ukraine.”

But phasing out Russian gas means coal-fired power plants “might also be used longer than initially expected,” states the EU strategy. The decision to quit Russian gas has also led to a scramble to increase Europe’s imports of liquefied natural gas (LNG) from countries such as the US and Qatar, as well as pipeline gas from Azerbaijan.

The commission said it would be necessary to spend up to €12 billion – about 6 percent of the extra money needed—to build LNG terminals and upgrade oil plants to allow EU member states to switch to non-Russian fossil fuels.

Timmermans said the EU could still meet its target of net zero emissions by 2050. “You might use coal a bit longer, that has a negative impact on your emissions,” adding: “If we can actually do what I say, reduce our energy consumption in combination with a speedier introduction of renewables, we will bring down our emissions even quicker than before.”

The Dutch MEP Bas Eickhout, a vice-chair of the European parliament’s environment committee, said the commission was leaving the door open for member states to continue funding fossil fuel infrastructure. “Investments that are urgently needed for energy efficiency and renewables can still flow into new pipelines and terminals, this might continue our fossil energy dependency,” he said.

Green campaigners voiced concern about plans to source LNG from states in the Middle East and Caucasus with poor human rights records, while criticizing the green light for new gas infrastructure.

“The more we spend importing gas, the more we continue to expose the most vulnerable in our society to unaffordable energy bills, fuel the climate crisis and fund other repressive fossil-fueled regimes around the world,” said Murray Worthy at Global Witness.

To help speed up renewable energy, the EU wants to make it easier for companies to build wind and solar farms. Officials said it could take up to nine years to get a permit for a windfarm and four for solar. “And this is time we do not have,” said one. Any change in planning laws would require action from national and local authorities.