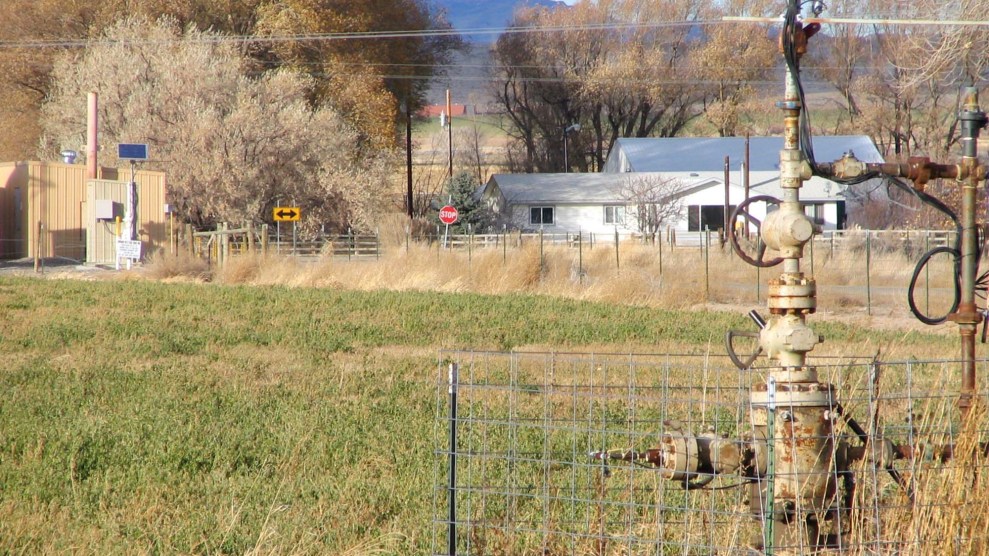 A natural gas wellhead in the rural community of Pavillion, Wyoming. Dustin Bleizeffer/AP

For the past year, Roishetta Ozane has been trying to stop new liquified natural gas, or LNG, export terminals from being built in southwest Louisiana. “We are already inundated with LNG and oil and gas,” said the clean energy organizing director with Healthy Gulf, who lives in the town of Sulphur. “We’re surrounded by it.”

Ozane, who lost her home to back-to-back hurricanes in 2020, was already fighting the growing number of terminals, where companies supercool and condense natural gas to load it onto specially-built tanker ships. Now, the ripple effects of Russia’s war in Ukraine are making her work even more urgent.

Ozane and other climate and environmental justice advocates fear that the industry is using the war to lock in long-term sales contracts and financing for a flood of new export terminals. They say this would do little to alleviate the current energy crisis, but could push climate targets out of reach and threaten nearby communities at every step of the supply chain—from fracked wells, to pipeline compressor stations, to massive LNG export terminals. While some Americans are hurting due to high gas prices and inflation, frontline communities could end up paying with their health and lives.

“If we bring in all these LNG facilities…we’ll have to deal with them for 30 years. That’s why we’re fighting this.”

“If we bring in all these LNG facilities, they’re not going to start operating for a few years. But then, when they start, we’ll have to deal with them for 30 years,” Ozane said. “That’s why we’re fighting this.”

In response to the war in Ukraine, last week the European Union announced an ambitious plan to slash its use of Russian natural gas by two-thirds by the end of the year. Some of the gap in supply will be addressed by reducing demand and accelerating clean energy projects, but Europe is counting on LNG from the US to replace a large portion of the Russian gas.

US producers were already ramping up sales to the EU, even before Russia’s invasion began. In December, at least two ships carrying US LNG diverted mid-transit to deliver gas to Europe, instead of their original destinations in Asia, to take advantage of record-high prices. In mid-March, the Department of Energy allowed two LNG terminals in Louisiana and Texas to boost exports, meaning every export terminal in the US is now operating at maximum capacity.

Still, a chorus of voices from the oil and gas industry has been demanding that the Biden Administration remove restrictions on oil and gas development, including new LNG infrastructure. In a statement, Mike Sommers, the president and CEO of the American Petroleum Institute, called on the administration to pursue “meaningful policy actions to support global energy security, including further addressing the backlog of LNG permits, reforming the permitting process, and advancing more natural gas pipeline infrastructure.”

The problem with these talking points is that the federal government is not holding back LNG development. The US has eight existing LNG export terminals. An additional four are under construction, and the federal government has issued permits for 12 more, according to data from the Federal Energy Regulatory Commission and the Environmental Integrity Project’s Oil & Gas Watch.

Those 12 aren’t moving ahead yet, but it’s not because of anything that the Biden Administration is doing. “It has been investors that have been standing by the sidelines,” Clark Williams-Derry, an energy finance analyst with the Institute for Energy Economics and Financial Analysis, said during a recent panel discussion. LNG export terminals are multi-decade investments, and in recent years, it hasn’t been clear to investors that there would be enough long-term demand to justify funding new terminals.

But now, things are shifting. Since Russia invaded Ukraine, the price of natural gas has become more volatile, and buyers want to sign long-term contracts to secure more stable prices. Before, the financial outlook for LNG export terminals seemed uncertain. Now, “we are starting to see that certainty flow in,” Williams-Derry said.

It’s possible that the long-term contracts will give investors the confidence to back the pending facilities, and that more will be built. Williams-Derry also expects US gas production to continue to increase, but not so quickly that it tanks prices.

“This is just locking me, my family, my community into more dirty energy, instead of a cleaner alternative.”

Meanwhile, communities at every stage of the US supply chain are worried about what this means for their lives and their health. Lois Bower-Bjornson, her husband, and their four children live in Washington County, Pennsylvania—by far the most heavily fracked county in the state. “This is just locking me, my family, my community into more dirty energy, instead of a cleaner alternative,” said Bower-Bjornson, who serves as a field organizer for the Clean Air Council.

Bower-Bjornson’s home is within 5 miles of more than 20 active fracking wells. In 2019, she and her family participated in a study that found high levels of numerous hazardous chemicals associated with fracking in their bodies.

“It’s frightening,” said Bower-Bjornson. “It just becomes something that you live with, but, you know, it’s always on your mind.”

Beth Weinberger, director of research and policy at the Environmental Health Project, has been tracking the public health effects of fracking in Pennsylvania since 2012. She notes that numerous health studies have linked proximity to fracking operations with an increased risk of asthma, skin disorders, cardiac problems, preterm births, low birth weight, and childhood leukemia. If gas production continues to rise, “it just means more of the same,” said Weinberger.

At the opposite end of the pipeline, if the gas industry succeeds in building more LNG export terminals, that means more of the same for Ozane and her community, too.

Ozane and her six children lived in Lake Charles, Louisiana, before Hurricanes Laura and Delta destroyed their home two years ago. Since then, they’ve been living in a trailer provided by the Federal Emergency Management Agency, or FEMA, in the next town over. Every morning when Ozane steps out her front door, she sees a skyline filled with petrochemical plants, smokestacks, and flares. “Some days it smells like eggs. Some days it smells like a really strong smell of Clorox or chlorine. Some days there’s this chemical smell that you really can’t put your finger on,” she said.

Already, LNG export terminals are adding to that pollution burden. About 10 miles down the road from where Ozane lives, the Cameron LNG terminal releases sulfur dioxide, nitrogen oxides, volatile organic compounds, fine particulate matter, and carbon monoxide. Further south, Venture Global’s Calcasieu Pass LNG terminal began operating in January. Since then, “it has flared nearly continuously, sometimes with a 300-foot flame with black smoke at the end of it,” said James Hiatt, a former oil and gas worker who now serves as a coordinator for the Louisiana Bucket Brigade. “It really makes you think, how could this be clean energy in any sense of the word?” he said.

The flaring makes Ozane uneasy. “The plants will say, if you see a flare, that means you’re safe, because if the flare is going, that means the systems in place are working. But yet, we see the flare, we see the smoke, we see the steam, and we know that we’re inhaling whatever they’re releasing,” she said. On top of that, “each individual plant is talking about their individual emissions, but what happens when you put all of those emissions together? What are we breathing in?” she asked.

Southwest Louisiana was already the epicenter of the LNG export boom, and now companies are proposing even more terminals there. For Hiatt, that raises serious questions about safety. Lining the coast with LNG infrastructure degrades wetlands—a natural buffer against storm surge from the hurricanes that regularly slam the coast—making nearby homes more susceptible to flooding.

And then there’s the risk of explosions. “To put massive amounts of natural gas in these huge storage tanks and think that you can out-engineer Mother Nature in a way that’s not going to cause some catastrophic fire or explosion over the course of the next 30 years? How many storms can these things withhold?” Hiatt asked. In 2018, the Sabine Pass LNG export facility in Cameron Parish had to shut down two LNG storage tanks after workers discovered gas was leaking from numerous cracks. It was a near-miss that could have resulted in an enormous explosion.

Ozane and Hiatt are both worried about what’s happening in Ukraine, and about the looming gas shortage this winter. But like Bower-Bjornson, they don’t think that locking their community into decades worth of more pollution from the oil and gas industry is the right answer. Even if the proposed terminals are able to secure funding, it typically takes around three years for them to come online. Rather than doubling down on fossil fuels, they hope Europe will rapidly reduce demand and switch to clean energy sources. “We cannot put their fight on our backs by making ourselves a living sacrifice,” Ozane said.

Opposing anything that the oil and gas industry wants to do in southwest Louisiana is an uphill battle. People like Ozane and Hiatt have been working to educate their neighbors on the industry’s expansion plans and the harms they would bring. They’ve been asking regular people to speak up at meetings and write public comments to prevent the permitting of even more export terminals. They’re also advocating for policy changes at the state and federal level.

“I wouldn’t be doing this if I thought that this was locked in and we were screwed,” said Hiatt. “We’re not there yet. I mean, we’re at the threshold,” he continued. To him, when it comes to both preventing new LNG terminals from being built and taking action on climate change, “our actions and our inactions today matter in a way that maybe they haven’t mattered as much previously,” he said. He understands that people need jobs, but hopes the region can switch to a more sustainable industry, like offshore wind. “We’ve got to do something different,” he said.

The way Ozane sees it, southwest Louisiana is facing two existential crises right now: pollution from the oil and gas industry and climate change. Every morning when she wakes up, she asks herself: “Am I doing enough to save this place for my children?”

“They have every right to drink the water, to fish in the lakes, to go to the beach and enjoy the sands, to go shrimping, to enjoy the festivals and the music and the culture,” she said. “I’m going to do everything that I can to protect it for them.”