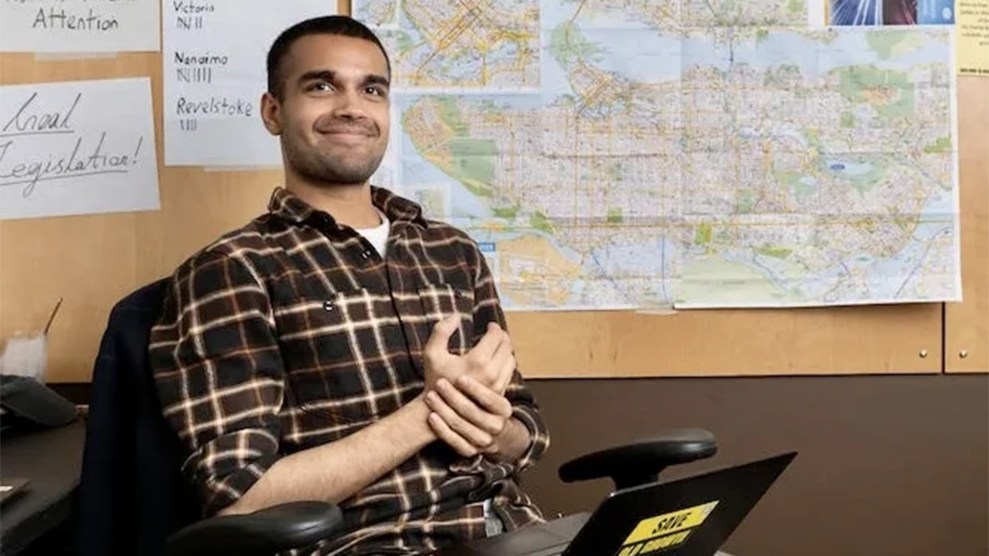 The lawyers he consulted advised Zain Haq "that I should pack light and be prepared to travel.”Ian Harland

An international student leading a controversial civil resistance campaign to end old-growth logging in B.C. is fearful the Canada Border Services Agency is looking to deport him.

Zain Haq, a co-founder of the Save Old Growth protest group behind a recent series of highway blockades across the province, has been ordered to show up at a CBSA office.

The third-year history major at Simon Fraser University who hails from Pakistan is in Canada on a study permit, a document issued by Immigration Canada.

The 21-year-old activist has gone into hiding after talking to a number of lawyers who advised him it’s likely CBSA wants to detain him. He has yet to find a lawyer who will represent him. “Basically, what all of them suggested to me was that I should pack light and be prepared to travel,” Haq told Canada’s National Observer on Thursday.

Ultimately, Haq is worried CBSA intends to deport him because of his activist work. “It’s my suspicion and other people’s suspicion that it’s due to political reasons,” he said. “I’m feeling very anxious because it’s very rapid. It’s a lot to actually process and work with.”

Some conditions for obtaining a study permit include obeying the law and the absence of a criminal record. The SFU student has been arrested 10 times for acts of civil resistance at various climate-related protests since 2020. And on Feb. 15, he was sentenced to two weeks in jail for criminal contempt of court after violating an injunction involving the Trans Mountain pipeline expansion (TMX).

“This is a really bad time for this to happen,” Haq said. “It’s really important that our mobilization doesn’t collapse.”

He was also fined $1,500 in B.C.’s Provincial Court for his involvement in an Extinction Rebellion protest against TMX on Nov. 27 that blocked a Canadian National Railway line in Burnaby. And he’s currently facing five charges of mischief, he said.

But despite being locked up for contempt of court, Haq doesn’t believe it technically results in a criminal record.

CBSA officers visited his apartment twice early this week when he wasn’t there, Haq said. In the first instance on Monday, CBSA officers left a letter for him with his roommate ordering Haq to attend the border agency offices the next morning or risk arrest. They returned again the following day.

Haq said he didn’t see the letter until the morning in question and had no time to respond or seek legal advice. The threatening letter did not provide any information about why he was being told to attend the border agency.

The CBSA summons occurred the same day Save Old Growth launched its recent campaign pledging a rash of road blockades in June. There’d been no prior phone calls or letters before agents suddenly knocked on his door, he added.

Haq will try to avoid contact with CBSA until he can finish preparing along with SOG organizers for his possible deportation. But he also intends to present himself to the border agency once he’s obtained legal counsel. “Because I’m one of the central co-ordinators, this is a really bad time for this to happen,” he said. “It’s really important that our mobilization doesn’t collapse.

“So, I’m just trying right now to figure out what the plan is for me potentially not being in the city.”

CBSA can’t provide information on specific cases generally considered protected under the Privacy Act, senior spokesperson Rebecca Purdy said in an email to Canada’s National Observer. However, the agency has a legal obligation to remove all foreign nationals and permanent residents who violate the Immigration and Refugee Protection Act (IRPA), Purdy wrote.

But before taking any enforcement action, CBSA reviews all relevant factors related to a case in tandem with IRPA violations outlined in sections 34 to 42, she said, noting cases that involve safety and security issues are prioritized.

“All individuals who are subject to enforcement action by the CBSA have access to due process and procedural fairness,” she said. “Those being removed have either exhausted, or chosen not to pursue further legal recourse and have no legal right to remain in Canada.”

But Haq questions whether his activities to emphasize the gravity of the climate catastrophe should be deemed illegal while governments’ failure to act in the global emergency is not. “Our framing is that the illegal activities are being conducted by the government, and we’re trying to do something about it.”

Haq plans on “engaging in similar activities if I go back, and that could obviously lead to my imprisonment, or worse.”

He acknowledged there’s a measure of risk for anyone who takes part in civil disobedience movements. “Other people stopped caring about their status, their jobs and their careers to enter resistance and risk arrest,” Haq said.

“Putting ourselves in harm’s way is how we maximize the likelihood of success,” he added, adding SOG’s fearlessness has made it possible to attract and mobilize a large number of people.

The dangers of the accelerating climate crisis are greater than any individual personal risk, he said. “We’re faced with mass starvation and extreme likelihood of societal collapse over the next few years.”

The 21-year-old activist said he could face political persecution if he is indeed deported back to Pakistan. “It’s very likely because I’ll obviously be engaging in similar activities if I go back, and that could obviously lead to my imprisonment, or worse,” Haq said. “Whether I’m in Canada or back home, I think political persecution is going to be common if you’re going to be on the right side of history.”