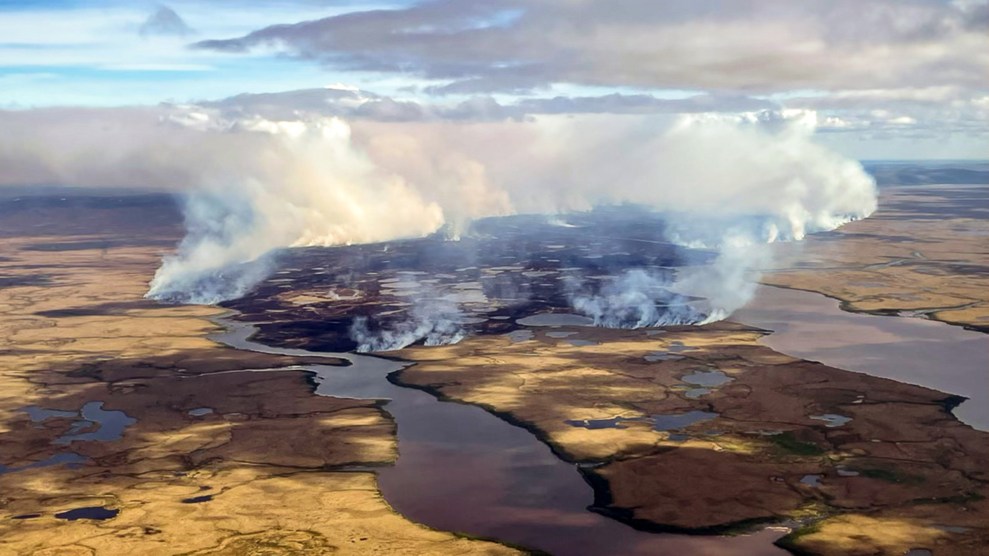 It is gearing up to be a record-breaking fire year in Alaska. By the end of June, more than a million and a half acres had burned, mostly in the southwestern part of the state. Several evacuation orders have been issued, and much of Alaska has been blanketed with smoke. On July 4 alone, 20 new fires ignited.

Alaska fire experts say the season has had an incredibly quick start, with fires driven by a severe drought, hot temperatures and an abundance of lightning strikes. More acreage burned in June than in the 2020 and 2021 Alaska fire seasons combined. According to Rick Thoman, a climate specialist with the Alaska Center for Climate Assessment and Policy, this marks the earliest time in the season that a million acres has burned. This month, he said, could set the stage for “a really epic fire season.”

Experts say the fires’ location is noteworthy. Though lightning and wildfires are more common in Alaska’s interior, many of the June fires took place in southwest Alaska, where the Yukon-Kuskowim Delta experienced two record-setting tundra fires, and the Bristol Bay region saw an unprecedented wildfire season. “We see fires between the Alaska and Brooks Ranges, in Interior Alaska and western Alaska, but then these ones that are further south, southwest and towards the ocean and the tundra, are definitely unusual—especially to be such high acreage,” said Zav Grabinski, a communication specialist with the Alaska Fire Science Consortium. In the 20th century, tundra fires were not very large, Grabinski said. But as the tundra grows warmer, it becomes more hospitable to larger plants like shrubs, which then become fuel for fires.

And in south-central Alaska, where most Alaskans live, a persistent drought, lightning strikes and human-caused ignitions involving fireworks or downed power lines have increased the risk of fire. Last month, within the span of a few days, the city of Anchorage managed to contain two fires that broke out near city parks.

Fairbanks already broke a record for the most days in June with visibility-restricting smoke.

With fire comes smoke. Given the combination of southwest Alaska’s fires and the new fire activity in Interior Alaska, Thoman says he expects to see a tremendous amount of smoke, which is likely to linger across the state until the late summer rains. The city of Fairbanks already broke a record for the most days in June that had visibility-restricting smoke: 13.

This puts residents at higher risk for smoke-related health issues, like headaches and burning eyes, as well as more serious illnesses like bronchitis, chronic heart and lung disease, asthma and emphysema. Smoke can also disrupt subsistence living, as gathering food, hunting and fishing, and engaging in the important cultural traditions connected to these activities becomes increasingly difficult.

Fires have been burning close to Gwich’in communities in Alaska, bringing huge amounts of smoke and sometimes evacuations. Faced with the challenge of adapting to a future of fire in the Arctic, the Gwich’in Council International—a nonprofit organization representing 9,000 Gwich’in people in the US and Canada—is spearheading projects to improve understanding of fire ecology, reduce the threat of catastrophic wildland fire, and review fire-management practices.

Devlin Fernandes, the executive director of the Gwich’in Council International, said the efforts were “spurred by a desire for greater cooperation and understanding about wildland fires in the Arctic, and how to apply Indigenous knowledge to their management.” Part of the project involves sharing Indigenous fire-management strategies, like details about controlled burns. Gwich’in people traditionally burned grass during early springtime to increase biodiversity and fertilize soil. The timing was important: The burns were always done when snow was still on the ground, because if the fires were set any later, the burn could get out of control.

Indigenous knowledge is also filling in gaps on other issues, such as whether—and how —lightning has changed over the last few decades. From a Western scientific perspective, Thoman, the Alaska climate expert, said it is difficult to determine if there is more lightning in Alaska.

“The technology involved in lightning detection has changed so much over the last 30 years,” he said. “You just can’t compare lightning strike counts from the ’90s to today. If you just look at the raw numbers, they’ve gone way up, but it’s not even an apples to oranges comparison. It’s an apples to hamburgers comparison.”

But elders in western and southwest Alaska say unequivocally that there’s a lot more lightning now than there used to be, Thoman said. Elders in Utqiaġvik, the nation’s northernmost town, recall having never seen a thunderstorm prior to 1992, notes a 2022 Arctic Council report on Arctic wildland fires. Researchers predict this trend will continue, with lightning increasing above the 50th parallel, an area that includes all of Alaska.

Looking ahead, fire experts expect wildfires to keep escalating around the state. Their severity depends partly on what the weather does: If a weather pattern brings periods of steady rain, that should tamp down the fire season fairly quickly. The rains typically come at the end of July or in August, but Thoman says that in some years, they never arrive. Right now, it is too early to predict if Alaska can expect steady rain later this summer.

“There’s enough fire on the ground now that these kinds of smoky conditions and active fires are going to be with us until we get into a rainy season,” Thorman said. “That’s for sure.”