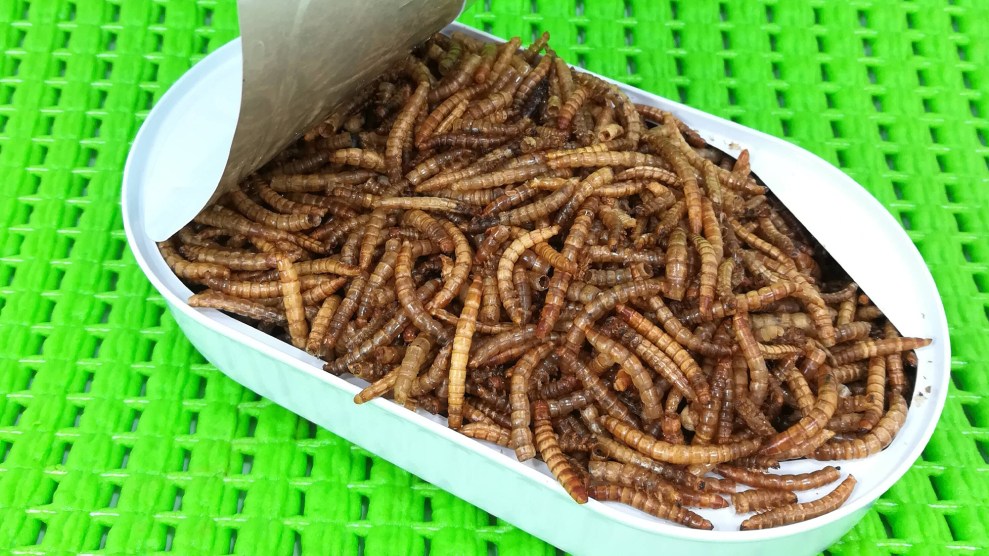 Mealworms, the larval form of the yellow mealworm beetle, have been cooked with sugar by researchers who found that the result is a meat-like flavoring that could one day be used on convenience food as a source of protein.

While mealworms have until now mostly been used as snacks for pets or as bait while fishing, they have potential as a food source for humans to help get the recognizable flavors of meat without the harmful impacts upon the climate, as well as direct air and water pollution, of raising beef, pork and other animal-based foods.

Food production is responsible for about one-third of global greenhouse-gas emissions, and raising animals for meat accounts for the majority of that.

“Insects are a nutritious and healthy food source with high amounts of fatty acids, vitamins, minerals, fiber and high-quality protein, which is like that of meat,” says In Hee Cho, a researcher at Wonkwang University in South Korea who led the study.

Cho said that edible insects, such as mealworms and crickets, were “superfoods” that have long been enjoyed by communities in Asia, Africa and South America. However, people in Europe and North America are generally more squeamish about eating insects, despite recent forays by several restaurants and supermarkets into providing insect options for consumers.

The use of mealworms as a meat-like flavoring may help bridge this gap, researchers hope. The new study, which will be presented to the American Chemical Society this week, found that the flavors were released when mealworms were heated with sugars, with the proteins and sugars interacting and caramelizing in a range of meat-like and savory flavors.

Different cooking processes produced different results, the researchers found. Steamed mealworms give off a sort of sweetcorn-like aroma, while roasted and deep-fried versions have more of a similarity with shrimp. A panels of volunteers were used in sniff tests to ascertain the most meat-like favors of those concocted.

The global production of food is responsible for about a third of all greenhouse gases emitted into the atmosphere, with the raising of animals for meat responsible for the majority of these emissions. Grazing and feeding livestock consumes about 80 percent of Earth’s farmland, with everything from cow burps to the mass deforestation of land to make way for pasture causing planet-heating emissions.

Scientists say avoiding meat and diary products is the single biggest way to reduce your environmental impact upon the planet, although meat eating remains popular in the west and is now gaining traction among an emerging wealthy class in China and India.

Insects, which can be raised in vast numbers in small spaces with a fraction of the pollution of traditional meat, have been cited by the UN’s Food and Agriculture Organization as a potentially valuable protein source to feed a growing global population that is expected to surpass 9 billion people by 2050.