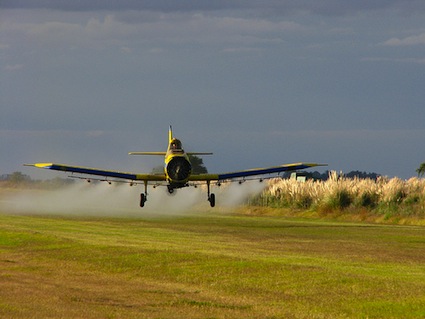 Fumigants don't generally make it into the fruit you eat, but that hardly makes them "clean." <a href="http://www.flickr.com/photos/santiagonicolau/4518790585/sizes/m/in/photostream/">Santiago Nicolau</a>/Flickr

Recently, Environmental Working Group released its annual “Dirty Dozen” and “Clean Fifteen” lists of produce with the most and least pesticide residues. My reaction was: Well done, but what about farm workers? The EWG lists provide an invaluable tool to help consumers reduce pesticide exposure, but tell us nothing about the folks who grow and harvest the great bulk of food we consume.

Well, over on Pesticide Action Network’s Ground Truth blog, researcher Karl Tupper shed some light on the murky question of farm worker exposure to toxic pesticides. Tupper stressed that pesticide residues pose a real threat to consumers. However, he adds “It’s the farmers, farm workers, and residents of rural communities who are really most at risk from pesticides, not consumers.” Tupper explains:

While these folks are exposed to pesticides from food like the rest of us, they also must contend with pesticide fumes drifting out of fields, exposure from working directly with pesticides, and pesticide-coated dust and dirt tracked into their homes from the fields.

Disturbingly, two Clean Fifteen items—sweet potatoes and mushrooms—land on top of Tupper’s list of most pesticide-intensive crops. And the least pesticide-intensive crop by Tupper’s calculations—spinach—took fifth place on EWG’s Dirty Dozen. In short, what’s clean for consumers is too often dirty for farm workers, and vice-versa. One main reason for the dirty-but-clean nature of so many vegetables that reach consumers’ plates: widespread use of highly toxic fumigants. Tupper describes them like this:

As Tupper sums it up, “We can’t shop our way out of this: pesticides are a public policy issue.” Currently, public policy around fumigant use is egregious. Nearly a quarter century after it was banned globally by the Montreal Protocol (1987), a fumigant called methyl bromide remains in widespread use on US tomato and strawberry farms. That’s because the United States keeps negotiating “exceptions” to the ban deemed necessary for industrial-scale production of these crops. Methyl bromide is vile stuff—it has been shown to attack the central nervous system, damage the lungs and kidneys, and is linked to reproductive disorders, including birth defects. It also destroys the ozone layer, which is what got it banned by the Montreal Protocol in the first place.

Over the outraged objections of a range of scientists, first the EPA and then the state of California has approved an even more toxic alternative to methyl bromide called methyl iodide. It’s Montreal-friendly, because it doesn’t harm the ozone layer. But methyl iodide will be a disaster for humans who come into contact with it, scientists warn.

Don’t feel right about farm workers getting poisoned so you can eat strawberries? Check out the “Safe Strawberry Campaign for Cancer-Free Berries.”