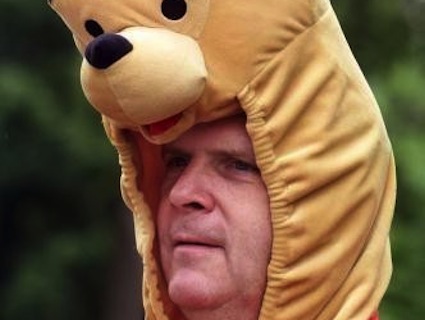 USDA chief Tom Vilsack: not exactly baring his fangs in his role as GMO-industry watchdog.

As I reported last week, the USDA’s recent surprise decision not to regulate genetically modified bluegrass poked yet more holes in an already-porous regime for overseeing GM crops—essentially to the point of regulatory collapse.

There were a few important strands I wasn’t able to wrestle into the story. The main one is an odd letter that USDA secretary Tom Vilksack sent Scotts Miracle-Gro as an addendum to the agency’s response to Scott’s GM bluegrass petition. Vilsack’s letter, dated July 1, acknowledges concerns that GM bluegrass will contaminate non-GM bluegrass—that is, that the Roundup Ready gene will move through wind-blown pollen and work its way into non-modified varieties. This is the process known as “gene flow,” and it has already been well-established for GM corn and other modified crops.

Since bluegrass shows up (among other places) in cow pastures, organic dairy and beef farmers face the risk of suddenly having their animals nosh on fields full of a GM crop, which would jeopardize their organic status. As the the secretary put it in his letter:

So, Scotts is going to release a product that will potentially cause real and arbitrary harm to market actors. What’s Vilsack’s response?

USDA therefore strongly encourages Scotts to discuss these concerns with various stakeholders during these early stages of research and development of this GE Kentucky bluegrass variety and thereby develop appropriate and effective stewardship measures to minimize commingling and gene flow between GE and non-GE Kentucky bluegrass.

Thus, in lieu of taking action to stop Scotts from doing harm or penalize it if it does, the USDA is encouraging Scotts to talk to stakeholders to avoid harm. In other words, go forth and regulate yourself … please?

Vilsack’s letter is deftly summarizes of the agency’s paradigm for overseeing the introduction of new GM crops: Yes, they have the potential to cause serious harm; no, we can’t do anything about it. In one sense, that approach represents progress. Before Vilsack, the agency was loathe to admit that GMOs posed any threat to the environment or to farmers. But as I reported last week, the Roundup Ready bluegrass decision also signals an even higher level of laissez faire: Whereas before the agency regulated novel crops weakly, it now seems content not to regulate them at all.

This is a critical change. The National Environmental Protection Act (NEPA) requires that the USDA conduct an environmental impact study for all the crops it deregulates. But to deregulate a crop, the agency has to regulate it first. As I explained last week, the USDA has two “regulatory hooks” under which it can regulate GM crops: “plant pest” status and “noxious weed” status. In the bluegrass decision, the USDA signaled that it won’t be applying those hooks to a broad variety of novel crops.

That leaves new crops unregulated—and not subject to NEPA requirements for environmental impact statements. We should recall that it was the requirement to conduct such assessments that forced the USDA to acknowledge some of the pitfalls of GMOs in the first place.

Take the case of the Monsanto’s Roundup Ready alfalfa. The agency deregulated it in 2005 without an impact statement, but because its “regulatory hooks” had caught the crop in the first place, the watchdog group Center for Food Safety was able to sue the agency for violating NEPA. A federal judge ruled that the release of GM alfalfa be delayed pending an impact statement.

In December 2010, the USDA finally got around to releasing it. The agency’s vast environmental impact statement for GMO alfalfa (PDF)—so sprawling I had to download a new version of Adobe Reader to read it—was blunt on two points: 1) “gene flow” between GM and non-GM alfalfa is “probable,” and threatens organic dairy producers and other users of non-GMO alfala; and 2) there is strong potential for the creation of Roundup-resistant “superweeds” that require ever-higher doses of Roundup and application of ever-more toxic herbicides. The report noted that 2 million acres of US farmland already harbor Roundup-resistant weeds caused by other Roundup Ready crops.

The analysis was so stark that soon after the report’s release, Vilsack felt moved to explain it. He issued an “open letter to stakeholders” that acknowledged the “the potential of cross-fertilization to non-GE alfalfa from GE alfalfa—a significant concern for farmers who produce for non-GE markets at home and abroad.” And he signaled that the agency was moving toward a “new paradigm based on coexistence and cooperation” between GM and non-GM players.

The remarks were significant, because no USDA chief had ever acknowledged that the novel technology could do real damage to organic agriculture. Rumors stirred that the agency was going to impose restrictions on plantings GM alfalfa—something it had never done before. Food-industry critics applauded. NYU professor Marion Nestle declared the notion that Vilsack was even considering restrictions a “breakthrough.” The biotech industry, meanwhile, reacted to the specter of restrictions on a GMO crop with fury, backed up by farm-state senators.

But soon after, the agency abruptly reversed course and fully deregulated Monsanto’s novel crop without restrictions, brushing aside concerns raised in its own analysis. Just as the bluegrass decision came down late on the Friday before a long holiday weekend, the USDA announced its alfalfa call in that sleepy week between Christmas and New Year’s.

A Wall Street Journal report suggested that the White House had intervened in the decision, preventing the USDA from imposing restrictions on GM alfalfa as part of an effort to combat “burdensome” regulation. Certainly, the GMO industry maintains a powerful voice in Obama-era Washington, just as it has under every president dating to Reagan. A recent Food & Water Watch report documented the gusher of cash the biotech industry spends on D.C. lobbying. The industry spent more than a half billion dollars on lobbying between 1999 and 2009, FWW reports. In 2009 alone, the GMO giants dropped a cool $71 million pushing its agenda. It’s also worth noting the number of Monsanto-related people who have worked in key policy ag-policy postions in Obama’s adminstration.

Whatever the motivation, the alfalfa dereuglation set a pattern for how the USDA views GMOs: Yes, GMOs cause harm; no, we don’t plan to do anything about it. Last week’s bluegrass decision, by creating an avenue through which the USDA can avoid conducting environmental impact statements, raises that attitude to the level of policy.

Clearly, the USDA has neither the appetite nor the regulatory tools to properly oversee novel GMOs. The only remedy I can see is congressional intervention: a new set of laws governing the oversight of GMOs to replace that the failed ones now in place. But in the money-dominated US political system, the prospect for such reform is dim.