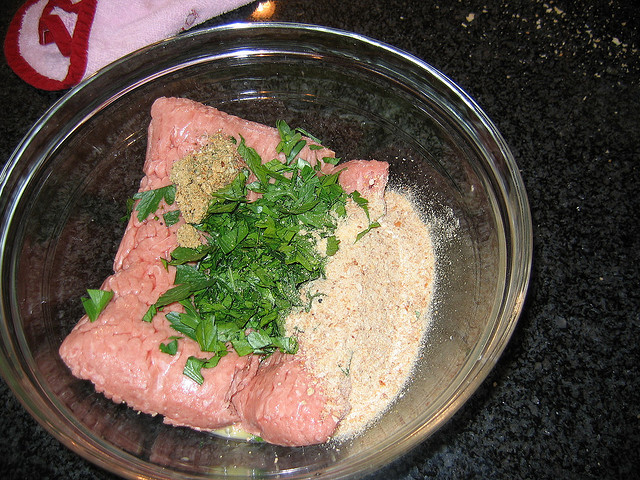 What once looked like the beginnings of a great dinner no longer seems so appetizing.Flickr/<a href="http://www.flickr.com/photos/magro-family/2799815687/" target="_blank">aMichiganMom</a>

Late Wednesday afternoon, Cargill, one of the globe’s largest agribusiness firms, announced one of the most massive meat recalls in history: 36 million pounds of ground turkey potentially laced with antibiotic-resistant salmonella, all of it from a single massive processing plant in Arkansas.

There are many hard questions to be asked about this affair, but first I want to get a grip on scale. I have trouble visualizing 36 million pounds of dodgy ground turkey. That’s a lot of suspect turkey burgers! How many? Let’s allot each burger a third of a pound (a little bigger than McDonald’s iconic Quarter Pounder). That would make 108 million sketchy burgers—enough to sicken every resident of the globe’s six most populous cities (Shanghai, Istanbul, Karachi, Delhi, Mumbai, and Beijing).*

Okay, so we’ve established that we have a massive recall going on here. Let’s get to some more serious questions.

Already, the tainted turkey has sickened at least 77 people and killed one. The CDC reckons that for every reported case of food poisoning, 38 go unreported. That means that the total number of people affected could be more like 3,000.

And more will almost surely fall ill. In a 2004 critique of the USDA’s “voluntary” system for managing food-borne illness outbreaks, the GAO estimated that companies recover only about 36 percent of targeted products in a typical recall. In a press release, Cargill revealed that the suspect product emerged from its Arkansas facility between Feb. 20 and Aug. 2. How much of that is still sitting in people’s freezers—and will remain there through this “voluntary recall,” ready for the next grill-out? The USDA has released a dizzying list of the brand names that Cargill uses to market its ground turkey. None of them contain the word “Cargill”; the company instead opts for handles like “Shady Brook Farms” and “Honeysuckle” and likes to throw around the adjective “natural.”

That bit of word play speaks to how turkey has come to be marketed as a healthy choice—and the irony that it offers a dose of drug-resistant salmonella along with its vaunted “leanness.” To me, it’s tragic when people try hard to choose healthy, affordable foods and find their kitchens full of industrial, potentially deadly crap. This is a case of the regulatory agencies not protecting the public from a highly consolidated, heavily marketed industry’s suspect wares.

What do I mean? Start with the fact that the USDA has given the word “natural” a very broad definition. A company could stuff turkeys by the thousands in confinements, never let them see light of day, feed them all manner of dodgy stuff including daily subtherapeutic doses of antibiotics, slaughter by the millions in huge factories, grind the resulting meat declare the resulting product “natural.” Welcome to Cargill’s business model for selling turkey.

Then there’s the fact that the FDA and USDA know that ground turkey and other industrial meat products routinely are tainted with pathogens resistant to a variety of antibiotics. I demonstrated that last week, but here’s something I forgot: A 2008 FDA report compiled as part of the agency’s participation in the National Antimicrobial Resistance Monitoring System, which also includes the USDA and CDC. (Hat tip to the wonderful “scary disease” reporter Maryn McKenna for alerting me to this little-publicized report). Every year, the FDA procures various meat products from supermarkets and checks them for resistant strains of pathogens. According to the FDA, fully half of the ground-turkey samples it checked in 2008 carried salmonella resistant to at least three antibiotic classes and more than 15 percent harbored salmonella resistant to at least four classes. (The numbers for chicken breasts were almost as dire.)

So, while Cargill and 36 million pounds of suspect turkey make for a spectacular story, the problem is actually quite routine. And the regulatory agencies know it.

What, then, is the source of these drug-resistant salmonella strains that taint our meat? As I wrote last week, a USDA “technical review” of current science on the question points directly to the routine use of antibiotics on factory farms. The USDA squashed that paper, removing it from the USDA.gov site without comment. But it can’t squash the science.

With a mountain of suspect turkey looming over them, now is the perfect time for the agencies to grow a backbone and impose some limits on antibiotic use on factory farms.

Correction: In the original version of this post, I calculated that Cargill had recalled enough turkey to “fill six Empire State Buildings!” (emphasis, unfortunately, in original). That is mistaken, by wide margin. I made a boneheaded math error—I multiplied when I should have divided. In reality, Cargill recalled enough turkey to fill several floors of the Empire State Building. I (bitterly) regret the error.