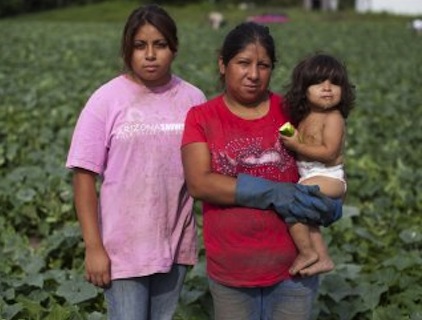 Know your farmworker, know your food: Zulema Lopez, 12, left, with her her mother and sister. <a href="http://theharvestfilm.com/component/option,com_phocagallery/Itemid,84/id,1/view,category/">U. Roberto Romano</a>/The Harvest/La Cosecha

Agriculture tends to cling to certain practices long after the rest of society has discarded them as morally repugnant.

You might think slavery ended after the Civil War, yet it exists to this day in Florida’s tomato fields, as Barry Estabrook demonstrates in his brilliant book Tomatoland. Likewise, the practice of subjecting children to hard, hazardous, and low-paid labor seems like a discarded relic of Dickens’ London or Gilded Age New York. But here in the United States, hundreds of thousands of kids are doing one of our most dangerous jobs: farm work. They toil under conditions so rough that Human Rights Watch (HRW) has seen fit two issue two damning reports (here and here) on the topic over the past decade.

In the second report, from May 2010, the group concluded: “Shockingly, we found that conditions for child farmworkers in the United States remain virtually as they were a decade ago.” Which is to say, appalling. The kids who pick our crops are routinely exposed to toxic pesticides, their fatality rate is four times that of other working youth, and they are four times more likely to drop out than the average American kid—overall, HRW reports, just a third of farmworker kids finish high school.

Oddly, there’s nothing illegal about their plight—most federal laws governing child labor don’t apply to farms, according to HRW; the US government spends $26 million fighting abusive child labor in other countries, but has failed to bring the fight to America’s fields.

The Harvest/La Cosecha, a new documentary directed by the veteran photographer and human rights advocate U. Roberto Romano, shines a bright light on this murky corner of the agribusiness universe. The film traces the lives of three teenagers and their families as they move across the US following the harvest, from Texas onion fields to Michigan apple groves and places in between.

I was lucky enough to attend a one-off showing at the Aero Theater in Santa Monica, California, one of the nation’s last great cinema temples. Romano’s work is worthy of the big screen—he has a great eye for the spare, monotonous beauty of monocropped fields baking in the sun. We get wide views of them, and their vast expanse seems on the verge of swallowing the kids whole as they pluck fruit after fruit. At other times Romano’s lens zooms in to show the field from the kids’ perspective: the rows that seem to stretch away to the horizon.

Rather than wagging a finger, Romano lets the kids and the families speak for themselves. We see them cooking dinner, squabbling, dealing with the act of packing up and moving on for the millionth time. They then take to the road in stuffed, beat-up trucks, in pursuit of the next harvest.

The featured kids, two girls and a boy ranging from 12 to 14 years old, are bright and articulate. They’re smart enough to realize they’re getting a raw deal, that their itinerant lives are harder and more complicated than those of the classmates they’re always being wrenched away from at school. Their parents, hyper-focused on keeping the family fed and whole, yet breaking down physically from the rigors of the field, offer a future their children can neither embrace nor easily escape.

As one of the girls, 14-year-old Perla Sanchez, tells Romano, we can’t study and graduate high school because we have to work—and we have to work in the fields because we’re not properly educated.

It’s a vicious cycle, and the film offers no way out. And really, there is no way easy way out—without a high-school diploma, the farm kids face abysmal job prospects in the best of times, let alone the current job market. The kids in the film are right: They’ve been dealt the hand of poverty.

The only way to give them a fair shake is to improve pay for farm workers. None of the families depicted in The Harvest, as  the film makes clear, would subject their kids to lives of field labor if they weren’t desperate for money. A generation is being sacrificed to feed us cheaply, and it’s about time someone paid attention.

Here’s the trailer. You can catch The Harvest online at EpixHD.com.