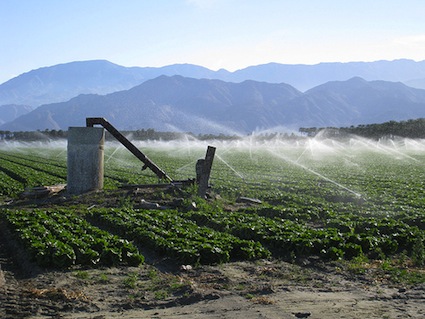 Greens grow in a heavily irrigated California field. <a href="http://www.flickr.com/photos/aquafornia/2282436274/sizes/l/">Aquafornia</a>/Flickr

When we last checked in with him, Freakonomics blogger Steven Sexton was ludicrously blaming the “local food movement” for a listeria outbreak that sickened people over a swath of the nation stretching from New York to Alabama to Oregon.

Now Sexton is back with an even broader indictment of local food. This one starts off on shaky ground, and then plunges into an abyss of self-assured and deeply flawed analysis. Honestly, I would not spend time engaging with it if I didn’t know that serious people, some of whom wield real political power, automatically regard the Freakonomics brand with credulity. So here goes.

Sexton opens by raising the specter of a vast political tide on the verge of imposing relocalization on the US food system. A “Local Farms, Food and Jobs Act” has been introduced in Congress, Sexton informs us, which would allot about $200 million to local farm programs. He acknowledges that that sum amounts to a “rounding error in the $3.7 trillion federal budget”—but that’s not all! The local food lobby is formidible. Just look:

But the bill follows on a federal rule that gives preference to local farms in contract bidding for school lunches. It also builds on high-profile advocacy by Michelle Obama, who has become a leader of the food reform movement, joining the likes of Michael Pollan, the author of The Omnivore’s Dilemma, and famed-chef Alice Waters.

All of this is nonsense. In terms of influencing public policy, the local-food movement is stuck in the mud. The Local Farms, Food and Jobs Act, paltry sum notwithstanding, has no chance of passing. Meanwhile, a few members of Congress are currently holed up writing a “secret farm bill” which, if it passes, would slash funds for local food projects and provide yet more billions of dollars of public support for the kind of large-scale agriculture Sexton loves.

As for schools giving preference to local farms, their tiny lunch budgets—less than a dollar of federal cash to spend per meal on ingredients—mean they’re stuck buying the same old heat-and-serve dreck from the food industry. Meanwhile, Michelle Obama’a food advocacy has devolved into staging photo ops for Walmart. When Big Food lobbyists pushed Congress to gut new rules that would have improved school lunches, the First Lady uttered not a public peep.

What Sexton should worry about is the very institution the Freakonomics crew worships: the market.

So Sexton need not tremble at the thought of government power enforcing the dictates of the local food movement. The well-heeled agribusiness lobby has that arena pretty much sewn up. What he should worry about is the very institution the Freakonomics crew worships: the market. The number of US farmers markets quadrupled between 1994 and 2011, the USDA reports. In another recent study, the agency found that farmers selling into local markets grossed $4.8 billion in 2008, and that direct-to-consumers sales at places like farmers markets spiked 215 percent in real terms between 1992 and 2007.

This explosion in local-food sales took place with minuscule government support, in a period when billions of dollars of annual federal subsidies propped up industrial farming and antitrust regulators looked the other way while agribusiness firms consolidated into vast, market-dominating entities.

In other words, an increasing number of people want to support farmers in their own regions, and are bucking larger economic trends to do so. Are they misguided?

Yes, asserts Sexton: They are violating the doctrine of comparative advantage, and by doing so, they threaten the planet and the hungry. Again, the analysis doesn’t hold up. Comparative advantage, an idea from the 19th century British economist David Ricardo, holds that each region should generate a surplus in stuff it can produce most cheaply, and trade those excess goods for the specialized products of other regions.

But in our present-day food system, an entire host of ecological and social calamities masquerade as prime examples of comparative advantage. Sexton, for example, cites the case of California and its massive vegetable production:

The case for specialization is perhaps nowhere stronger than in agriculture, where the costs of production depend on natural resource endowments, such as temperature, rainfall, and sunlight, as well as soil quality, pest infestations, and land costs. Different crops demand different conditions and vary in their resilience to shocks. So California, with mild winters, warm summers, and fertile soils produces all U.S.-grown almonds and 80 percent of U.S. strawberries and grapes.

Now here’s a region making the most of its natural resource endowments! However, in much of California’s most productive farm land, the apparent comparative advantage is like the sight of water in a sun-baked desert: a mirage.

In the the state’s intensively farmed San Joaquin Valley, with its teeming fields of tomatoes, almonds, pistachios, lettuce, cantaloupes, grapes, and other crops, growers have long relied on federally subsidized water diverted from long distances to keep their crops irrigated. As this 2010 Environmental Working Group report shows, the soil in much of the valley is rich in selenium and other salts, which, when subjected to irrigation, concentrates in groundwater and makes it impossible for crops to grow. So that means expensive government-financed projects to divert fouled groundwater into waterways, which just pushes the ecological trouble downstream.

And as drought has further pinched the area’s water supplies, water is getting more expensive—forcing farmers to make adjustments that only make things worse. The veteran reporter Matt Jenkins put it this way in a Grist article last year:

Farmers are shifting to higher dollar-value crops that will cover the water price hikes—but, paradoxically, are more sensitive to drought. They’re pumping groundwater as an emergency supply of water—and burning through that safety net even as it saves them from the current dry spell. And some farmers here are beginning to think about an exit strategy from agriculture altogether.]

The US food system brims with such comparative-advantage mirages. Arizona’s arid Yuma Valley provides a huge portion of the nation’s winter vegetables, but to do so, it, too, relies on diverted water—in this case, from the Colorado River. As in California, heavy irrigation leads to high salt levels in groundwater, which then flows into Mexico, causing cross-border tensions and forcing expensive action on the part of the US government. South-central Florida, source of 90 percent of US winter tomatoes, has also been hailed as a comparative-advantage paradise for its sunny weather. Yet as Barry Estabrook shows in his excellent book Tomatoland, tomatoes could never grow there without an an annual monsoon of pesticides and fungicides.. And the Midwest’s former prairies produce mountains of corn; but in doing so they hemorrhage topsoil at alarming rates and send gushers of agrochemical down the Mississippi where they accumulate in the Gulf of Mexico, creating a huge annual dead zone.

A true application of comparative advantage—one that took ecological factors into account—would likely lead to changes in our food system that Sexton would deplore: a highly diversified, geographically dispersed ag landscape that takes advantage of ecological niches without driving them to ruin.

Brandishing his flawed comparative-advantage analysis, Sexton goes on to make a couple of fatuous claims. First this:

What Sexton is doing here is assuming that a relocalized food system would seek to grow just as much corn and soy as the current one. That’s just silly. The local food movement has been relentlessly critical of US ag’s corn/soy fixation. Nobody’s building out an alternative food system with the intent of reproducing the excesses of the current one.

Then we get this jawdropper:

And, as we try to tackle obesity, locavorism is likely to raise the cost of precisely the wrong foods. Grains can be grown cheaply across much of the country, but the costs of growing produce outside specific, limited regions increase quickly. Thus, nutrient-dense calories like fruits and vegetables become more expensive, while high fructose corn syrup becomes relatively cheaper.

Right; so we’re going to relocalize the food system and make sure to keep growing the same amount of corn, which we’re going to keep turning it into cheap high-fructose corn syrup. Huh? If Sexton took his nose out of USDA corn and soy data and took a look at what’s happening on the ground across the country, he’d see that no one is looking to open a local corn syrup factory.

But Sexton isn’t doing the serious work of thinking through what a re-localized food system would look like. We need much more of that—including critical perspectives. What he’s doing instead is mounting an intellectually vapid defense of the current deeply flawed food system, swathed in the high-sounding tropes of classical economics.