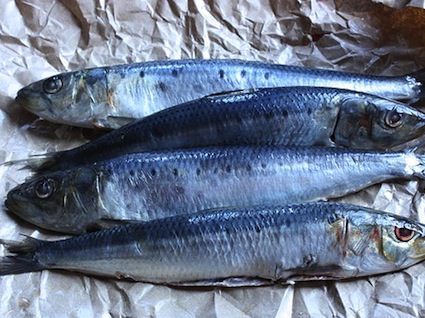 There’s lots of good wonky stuff in this Oceana report (PDF) about the importance of forage fish in coastal waters along the western US.

The basic argument goes like this: Small fish—species like anchovies and sardines, collectively known as forage fish—play an outsized role in the ocean. They lie at the bottom of the food chain, and when we fail to protect them, we also endanger the bigger species that feed on them, like tuna and whales, and thus threaten the entire oceanic ecosystem. Unfortunately, Oceana warns, there remain “major gaps” and “severe flaws” in the way the west coast’s forage fish are being managed.

Oceana highlights several factors currently menacing forage fish; here I’ll focus one one: aquaculture. To raise carnivorous species like salmon on farms, we have to catch a lot of forage fish and grind them into fishmeal and fish oil as feed. How much? According to most estimates, it takes five pounds of wild-caught sardines, anchovies, and other forage fish to produce a pound of farmed salmon.

The Oceana report makes clear that the practice of transforming lots of little fish in the wild into feed for big fish stuffed into farms is having a dramatic impact on the ocean:

Despite marked increases in feed efficiency, aquaculture’s share of global fishmeal and fish oil consumption has more than doubled over the past decade to 68% and 88%, respectively. Total production of farmed fish and shellfish increased threefold from 1995 to 2007. Furthermore, a greater percentage of fish farms now use compound feeds that are derived from wild fish. While feed conversion ratios (amount of fish feed required per quantity of farmed fished produced) are improving, growth in the industry has resulted in an overall increase in the quantity of fish feed used. This growth in the aquaculture sector will likely drive prices of forage fish higher, creating incentives for higher catch rates in existing fisheries and making once uneconomical fisheries feasible. [Emphasis added.]

The situation is, in short, insane. Forage fish like anchovies and sardines rank among the most nutritious and cleanest foods one can eat. They’re loaded with protein and omega-3 fats, and—unlike carnivorous species like tuna—low in contaminants like mercury. Given that they play such a vital role in maintaining a vibrant ocean, it makes no sense to squander them for aquaculture. Instead, we should simply eat them directly. Despite their fishy reputation among many US eaters, they’re actually quite delicious in both fresh and canned form. For this week’s Tom’s Kitchen, I’ll whip up a simple, tasty, and economical sardine dish.