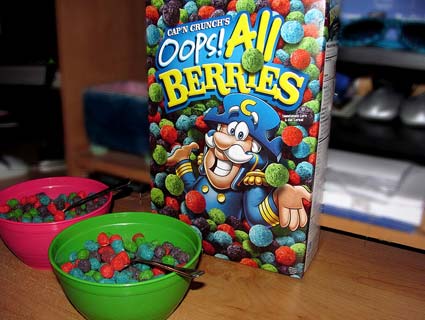 Perhaps unsurprisingly, Cap'n Crunch's OOPS! All Berries is one of the 10 most sugary kids' cereals on the market, according to the Environmental Working Group.<a href="http://www.flickr.com/photos/heydanielle/5495038840/sizes/z/in/photostream/" target="_blank">HeyDanielle</a>/Flickr

As a kid, I once begged my mom for a product called Ice Cream Cones cereal. That name really tickled Mom, the sheer audacity of it. It wasn’t even trying to sound healthy! Needless to say, Ice Cream Cones never made it into our shopping cart. Apparently, it didn’t make it into very many other shopping carts either: According to Wikipedia, it lasted for only a few months in 1987.

I’d always kind of thought that the demise of Ice Cream Cones Cereal proved that even stressed-out parents wouldn’t go for such an unapologetic nutritional disaster. But boy was I wrong! In perusing a new report on sugar cereals from the Environmental Working Group (EWG), I learned about many modern cereals my seven-year-old self would have been clamoring for, including Smorz, Froot Loops Marshmallows, and Cap’n Crunch’s OOPS! All Berries.

In case you couldn’t tell from their names, those cereals pack in a lot of sugar (or corn syrup, but as I’ve said before, basically same diff). And they aren’t the only ones: EWG found that three of the most popular kids’ cereals (Kellogg’s Honey Smacks, Post Golden Crisp, and General Mills Wheaties Fuel) contain more sugar per serving by weight than a Twinkie, and 44 others have as much sugar as three Chips Ahoy cookies.

The top 10 worst, ranked by percent sugar by weight:

EWG points out that the sugar content in these dessert-like cereals is much greater than federal guidelines recommend:

More than three-quarters of children’s cereals do not meet the federal Interagency Working Group’s proposed nutrition guidelines for 2016. Far more meet the industry’s standards for foods nutritious enough to be marketed to children.

Eighty-two percent of General Mills children’s cereals don’t meet the federal guidelines, but only 5 percent fail to meet the industry’s standards. Not surprisingly, General Mills has joined other food, media, and entertainment companies in calling to replace the government proposal with industry’s more lenient guidelines.

But major cereal makers don’t even take their own industry’s targets seriously; one-fourth of children’s cereals contain too much sugar.

So what’s a parent to do? In my house growing up, my folks were partial to a rather dreary cereal called Amaranth Flakes. If you prefer your cereal a bit less austere, these major brands are good choices, says EWG

Even cheaper, and hardly any sugar at all: a bowl of oatmeal.

The EWG has more breakfast factoids and suggestions here.