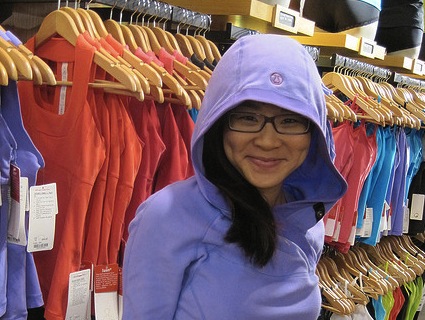 Cozy, but maybe not so great for the ocean. <a href="http://www.flickr.com/photos/lululemonathletica/4309990854/lightbox/">lululemon athletica</a>/Flickr

In its 2008 heyday, the blog Stuff White People Like took aim at the ubiquity of “outdoor performance clothes”—people’s penchant for marching down city streets and suburban strip malls dressed as if they were slogging the Appalachian Trail.

It turns out, our devotion to outdoor wear might be more than just a crime against fashion. It might also be a crime against the outdoors itself—or at least, that vast swath of it that’s covered by ocean.

Over on Grist, Clare Leschin-Hoar brings the bad news. She points to a recent study showing that “nearly 2,000 polyester fibers can shake loose from a single piece of clothing in the wash and, unfortunately, those tiny plastic bits are making their way into the ocean.”

Just how prevalent are they? In a recent Science study, researchers took sand from 18 beaches over six continents, Clare Leschin-Hoar reports. The results?

Every beach tested contained microplastics (particles about the size of a piece of long grain of rice or smaller). Of the samples collected, nearly 80 percent were polyester or acrylic, though without further research, it’s impossible to know exactly which type of clothing—whether it’s your stretchy yoga pants or that super-soft fleece blanket—is causing the most problems.

Worse still, “polyester is heavier than water,” Leschin-Hoar reports; so it sinks to the ocean bottom, an area that teems with little creatures that gobble everything in sight before eaten by bigger creatures—and the “microplastics” then bioaccumulate up the food chain, quite possibly to your plate.

Leschin-Hoar makes clear that the problem is only now coming to light, and that much research remains to be done about just how much damage plastic laundry lint is visiting upon ocean-dwelling creatures. But it’s hard to imagine any creature benefiting from consuming plastic.

The news presents a serious challenge for outdoor-wear maker Patagonia, which I believe earnestly wants to be an ecologically responsible corporate citizen. In an interview earlier this year, Patagonia founder/owner Yvon Chouinard told me that nonorganic cotton production was by far the most ecologically devastating part of making clothes.

That was a surprise because we thought the worst would be synthetics, because they use petroleum, and stuff like that. But the way we use synthetics here, polyester specifically and nylon-6, which is one type of nylon that can be recycled almost infinitely, we’re finding out that it’s way better to use than cotton. Number one, the clothing lasts a lot longer, and we can start with a recycled fiber. We’re making all these jackets out of recycled soda-pop bottles. At the end of its life, it can be melted down to its original polymer and used again, which is pretty cool.

But now it turns out that pieces of those old soda pop bottles might be fouling the ocean. A Patagonia spokesperson told ScienceNow that “Patagonia does intend to follow up on the findings with Polartec, its primary supplier of fleece.”

In the meantime, it looks like people should put away their fleeces and focus on fibers like wool and cotton—organically produced when possible. The best way to minimize their impact is to simply consume less of them. According to Institute for Local Reliance researcher Stacy Mitchell, “In the mid-1990s, the average American bought 28 items of clothing a year. Today, we buy 59 items.” I predict that we have only begun to reckon with the ecological consequences of that trend.