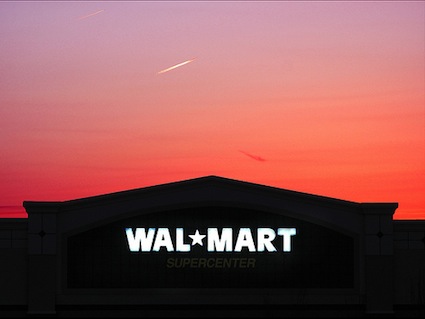 Walmart and other mega-retailers hold the key to bringing fresh, healthy food into low-income urban areas where grocery options are severely limited.

At least, that’s what some prominent observers argue. At a July 2011 press conference with execs from Walmart, Walgreens, and SuperValu, Michelle Obama heralded a pledge by those retailers to open or expand 1,500 stores in areas defined by the USDA to be “food deserts”—i.e., lacking in access to fresh food. “These stores estimate that they will create tens of thousands of jobs and serve approximately 9.5 million people in these communities throughout the country,” a White House press release declared. The First Lady herself, flanked by Walmart execs, added: “The commitments we’re announcing today have the potential to be a game-changer for kids and communities all across this country.”

Wal-mart is the world’s largest distributor of food—there is no one better positioned to bring high-quality, locally grown food into urban food deserts and fast-food swamps.

Such assertions jibe with Walmart’s latest growth strategy, which is to expand aggressively into dense urban zones after having already saturated suburban and rural areas with outlets. But do they jibe with reality? Obama and Allen are assuming that the presence of the globe’s largest retailer and grocer would automatically increase healthy food access in low-income neighborhoods. I’ve never seen any research to back that claim up.

Meanwhile, a recent study released by Manhattan Borough President Scott Stringer’s office throws serious doubt on the idea of Walmart as food/jobs panacea for the urban poor. Stringer’s staff put it together the report amid a bitter controversy over Walmart’s stated intention of opening a store in New York City, which the New York City Council and several community groups oppose but have limited power to stop.

The Stringer paper attempts to predict the effect of a hypothetical Walmart plunked down in the heart of Harlem, at 125th Street and Lennox Ave. It notes that even in “food deserts” like Harlem, there are retailers that sell food in some for or other: corner stores, green grocers, and the like. And it looks to gauge what would become of that existing infrastructure if a Walmart showed up. Now, one reason why Walmart might seem like such an attractive one-size-fits-all solution to the urban-food problem lies in the USDA definition of a food desert, which stipulates that for a neighborhood to attain that status, “at least 500 people and/or at least 33 percent of the census tract’s population must reside more than one mile from a supermarket or large grocery store.” [Emphasis added.] In other words, existing small-scale food-retail infrastructure in places like Harlem doesn’t typically figure into official analyzes, and thus isn’t valued. The Stringer team, though, reframes them as potential assets in rebuilding functioning inner-city food systems, and in their analysis, courting a Walmart into low-income neighborhoods isn’t automatically a win for food availability.

For data, the Stringer paper leans on this 2009 study by Loyola University researchers on the impact of a Walmart outlet that opened on Chicago’s economically struggling West Side in 2006. Their findings will not surprise anyone who has looked at the economic effects of Walmart’s dramatic rural expansion in the 1980s and 1990s. The Loyola researchers found that within a mile of the new store, 25 percent of businesses that compete with Walmart’s offerings—including food retailers—closed within a year of the store’s opening. By year two, the failure rate reached 40 percent.

Applying those findings to the hypothetical 125th Street/Lennox Ave. site in Manhattan, the Stringer report reckons that between 48 and 66 food-related businesses within a mile of the site would be shuttered if a Walmart opened there, resulting in a net loss of between 56,500 to 82,000 square feet of food-related retail space. It’s difficult to see how such a result would add to the food security of the neighborhood.

What about jobs? The Chicago report estimated that the introduction of Walmart was roughly a wash for the West Side on the employment front—it destroyed around 300 jobs at small businesses and added about as many to Walmart’s payroll. Wages didn’t change in s statically significant way. Stringer’s report points to a 2005 paper by Berkeley researchers estimating that the arrival of a Walmart in urban and suburban counties causes wages for general-merchandise and grocery workers to drop by around 1.3 percent.

So, contra Will Allen and Michelle Obama, Walmart’s much ballyhooed promise to expand into inner-city areas sounds more like a threat: square footage devoted to food retail slashed, no jobs added, and wages either held stagnant or pushed down.

Of course, as the Stringer report makes clear, there is a different and potentially much better way to respond to the lack of fresh food in low-income urban areas: bolstering and adding to, rather than dismantling, the food infrastructure that already exists on the ground. One such existing city-funded program, the Healthy Bodegas Initiative, launched in 2005 to push corner stores in Harlem, the South Bronx, and Central Brooklyn to stock more fresh food. According to the Stringer report, it has already substantially increased availability of milk, fresh fruits and vegetables, and leafy greens in those neighborhoods. Such businesses are much more likely to keep profits generated from food sales circulating within communities, and not leaking away to distant shareholders.

Indeed, with considerably less fanfare than her Walmart push, the First Lady herself has promoted a federal program called the “Healthy Food Financing Initiative,” which will provide loans and other resources to help grocery stores and other small businesses  to “sell healthy food in communities that currently lack these options.” (The Obama administration proposed spending $330 million on the program in fiscal 2012, but Congress only allocated $32 million.)  And of course, Will Allen’s own Growing Power projects in Milwaukee and Chicago are models of bringing healthy foods into low-income areas while adding jobs and building skills.

Such efforts focus on building up and leveraging community resources, not flattening everything in sight, which is the Walmart model. And unlike the Walmart model, community-centered attempts to build food security and economic vitality in low-income areas might actually succeed at building food security and economic vitality in low-income communities. Leaders like Michelle Obama and Will Allen can’t do much to stop Walmart from grabbing control of food retailing in such areas. But they don’t need to cheer the process on.