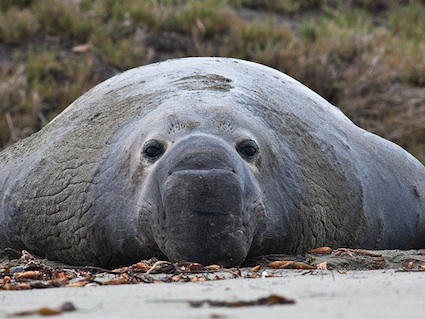 The meat industry defends its reliance on routine antibiotic use by flatly denying the practice poses any public health problem. The view is summed up by this 2010 National Pork Producers Council newsletter: “[T]here are no definitive studies linking the use of antibiotics in animal feed to changes in resistance in humans.” The claim, I guess, is that the drug-resistant bacteria that evolve on antibiotic-laden feedlots stay on those feedlots and don’t migrate out.

That contention is looking increasingly flimsy. My colleague Julia Whitty recently pointed to a new study showing that a particular antibiotic-resistant pathogen “likely originated as a harmless bacterium living in humans, which acquired antibiotic resistance only after it migrated into livestock.” In its new, harmful form, Julia reported, the bacterial strain “now causes skin infections and sepsis, mostly in farm workers.”

And humans aren’t the only creatures paying the price of routine antibiotic use. A research team from the Pacific Northwest has found that terrestrial pathogens, including strains of E. coli resistant to multiple antibiotics, are now infecting sea mammals. The researchers collected and performed autopsies on more than 1,600 stranded seals and otters over 10 years. They found that infectious diseases accounted for 30 to 40 percent of the deaths. “Comparing the diseases found in marine mammals with terrestrial mammals has identified similar, and in many cases genetically identical disease agents,” the researchers report.

They recently presented their findings at a science conference in Vancouver, and the title they chose says it all: “Swimming in Sick Seas.”

Not all of the pathogens are related to factory farms—some are associated with cats and possums. But livestock play a role. “We’re finding similar pathology or abnormalities in marine mammals to what we’re seeing in our livestock cases,” one of the researchers told the Vancouver Sun. Some of the seals carried strains of E. coli and Enterococcus that are “resistant to eight different antibiotics used in livestock,” the Sun reports. The pathway from factory farm to sea is likely manure that runs off into streams and ends up in the ocean.

The gross part is that the E. coli-infected seals were found in coastal areas where people sometimes take the water. “These harbour seals are in similar areas to where humans would be,” one of the study’s researchers told the Sun. “If clinical disease were to develop, it may be more difficult to treat with conventional antibiotics.”

He added: “Marine mammals recognize no borders, and neither do pathogens and parasites.” That’s not a message to comfort the meat industry, which wants us to believe that its antibiotic-resistant pathogens stay penned up on factory farms.