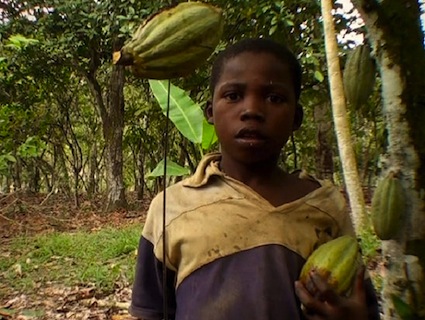 No denying it: A child laborer in the Ivory Coast's cocoa fields. <em>The Dark Side of Chocolate.</em>

That is the stark conclusion reached by the recent documentary The Dark Side of Chocolate, which I watched on the eve of today’s chocolate-drenched holiday. The film is a collaboration between the American documentary film maker U. Roberto Romano (whose film on child labor in US farm fields, The Harvest/La Cosecha, I reviewed here) and the Danish journalist Miki Mistrati. As the trailer shows, there isn’t much romantic about where your average bon-bon comes from.

The film-making is simple and stark, more straight investigative journalism than cinema. It opens with the narrator/protagonist, Mistrati, attending a chocolate trade convention in Belgium. He calmly asks several of the gathered worthies—reps from big chocolate trade associations and the transnational cocoa exporters and processors that dominate the cocoa trade—about rumors of forced child labor on Ivory Coast cocoa plantations. All claim ignorance of the phenomenon, and add sheepishly that if it does exist, they deplore it.

Then Mistrati heads to Ivory coast and surrounding countries to investigate the rumors. What he and his crew come up with is astonishing. An government official assures Mistrati that child labor does not exist in the nation’s vast cocoa fields; any children filing into the country from poorer places, like Mali, must be coming on vacation with their families. Using an assumed identity and a hidden camera, Mistrati gets a trafficker to tell him the going rate to deliver a child worker: 260 euros (about $340). And then Mistrati gains entry into a cocoa field and gets footage of kids no more than 15 years old slashing cocoa pods from trees with machetes and gathering them in great piles.

We learn from an interview with a crew leader that the kids aren’t paid and aren’t free to leave. What we’re watching, we realize, is children entrapped as slaves. And it’s a routine facet—a feature, not a bug—of agriculture in the world’s largest cocoa-producing nation.

Ivory Coast is essentially the candy-coated equivalent of a narco-state, dominated by three multinational processors, two of them based in the United States.

And lest we write it off as an abstraction, a horrible crime committed in a faraway place by strangers, the film drives home that Ivory Coast is essentially the candy-coated equivalent of a narco-state, dominated by three multinational processor/traders, two of them based in the United States: Cargill, Archer Daniels Midland, and the Switzerland-based Barry Callebaut. What those kids are harvesting ends up in our candy bars.

Back in 2001, as the film shows, those very companies signed the so-called Cocoa Industry Protocol, which committed them to ensuring the end of the “worst forms of child labor” by 2005. Rather than push to meet their pledge, the firms cling to plausible deniability: They don’t own the cocoa plantations, they merely buy the beans.

But of course that explanation is inadequate. Given their heft, these companies wield tremendous power to dictate the prices received by the plantations—and as they push prices down to maximize their profits, they send plantation owners scurrying to cut costs. Plantation workers are left carrying the burden while billions of dollars in profit concentrate at the top of the supply chain.

The Dark Side of Chocolate doesn’t unearth much that’s new or previously unknown. Tulane University’s Children in the Cocoa Sector program has also documented the failure of the industry’s protocol. “Unfortunately, over the last 10 years we have seen very little implementation of the actual commitments,” Tulane researcher Chris Bayer recently told CNN. “Industry did not live up to the Harkin-Engel protocol. The issues are systemic. Children are still working.”

What Dark Side does add, though, is something no report or static website can: Indelible footage of child slaves harvesting cocoa, and of human traffickers speaking bluntly of their trade. The film’s end is almost as memorable. Mistrati and his collaborators contact the major European and American cocoa traders and chocolate makers and try to set up screenings of their footage. All of the companies refuse to meet. Denied access, the filmmakers resort to a stunt: They project the footage onto a building adjacent to Nestle’s Geneva headquarters. We see suit-clad execs shuffling into their office, gaping at the spectacle of black children gathering cocoa pods. And then company security guards force Mistrati and his team to turn their projector off and leave.

The film left me more determined than ever to choose my chocolate carefully. My favorite chocolate company these days is Divine Chocolate, which not only pays Fair Trade prices to its farmers in Ghana but is 45 percent owned by those very farmers, meaning that profits from pricey chocolate bars build wealth within Ghana, not boardrooms in Switzerland or the United States. But a problem on the scale described by The Dark Side of Chocolate can’t be solved by small actions by consumers like me. It will also require serious pressure on the big firms. The NGO Stop Chocolate Slavery has good information on how to join that effort.