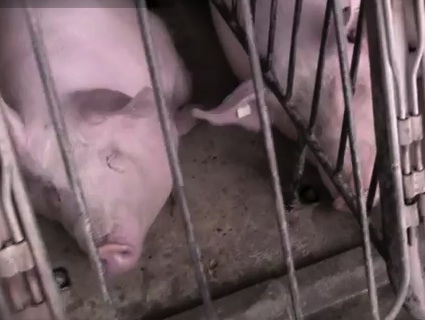 Screenshot of a video by the Humane Society of the United States, released Jan. 31., 2012.

The remarkable thing about Humane Society of the United States’ latest factory farm video exposé is how banal it is. No illegal acts like “downer” animals being forced down the kill line with fork lifts, or getting their brains bashed in with a pickax. What we have here is the everyday reality of pigs’ lives on a factory farm, without regulations flouted or spectacular violence committed. It is abuse routinized and regimented, honed into a profitable business model.

The video looks at two aspects of the dirty business of raising thousands of pigs en masse in close quarters: 1) the way pregnant pigs live as they wait to have their litters; and 2) what happens to baby pigs with they’re weaned after just three days. Neither is for the squeamish.

In case you couldn’t watch, the video illustrates the well-known, widespread practice of confining gestating pigs for months on end in 2 foot by 7 foot crates that deny them room to move or even turn around; and the ghastly (though perfectly legal) custom of snipping off baby pigs’ tails without use of painkillers.

The targets are two relatively obscure but quite large companies in Oklahoma, Seaboard Foods and Prestage Farms, the nation’s third- and fifth-largest hog producers. In addition to raising hogs, Seaboard also slaughters them and sells pork to large retailers, including Walmart. Its brands include the rustic-sounding Prairie Fresh; and the company’s website proclaims its “strong commitment” to animal welfare.

A note on videos like this one. Factory animal farms routinely deny journalists and concerned citizens entry to animal factories, citing both proprietary and biohazard concerns. The USDA, which regulates meat production, has shown zero interest in educating the public about the conditions under which they’re meat is raised—much less in improving those conditions. So the few companies that US dominate meat production blithely go about their dirty business behind the cloak of bucolic supermarket labels—that is, they would do so if animal-welfare groups like HSUS didn’t keep sneaking investigators into factory farms posing as job seekers.

Groups like HSUS and Mercy for Animals have become our shadow regulators, the eyes through which the public can see what the meat industry gets up to behind its well-guarded gates. Naturally, the meat industry has tried to end the scrutiny, funding campaigns for so-called “ag gag” laws in various states that would criminalize the taking of undercover videos. So far, their efforts have failed.

Meanwhile, exposés like this one have been extremely effective. Stung by one such exposure, Smithfield—the globe’s largest hog producer—has promised to stop stuffing pregnant sows in gestation crates by 2017. In the absence of regulation from the USDA, such industry volunteerism is the best we can hope for. And HSUS deserves credit for exacting it.