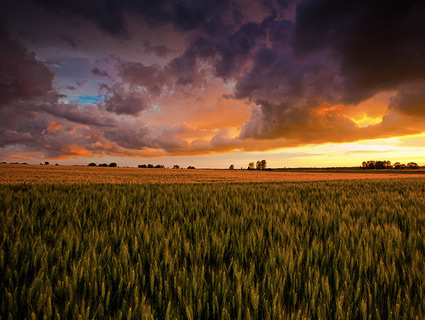 Just in case, the government in Tehran is pursuing a number of avenues to prep for possible military confrontation with Israel and the United States: Airbone war games. Puffed-up rhetoric. Possibly raising some hell in the Strait of Hormuz.

Also, they’re hoarding wheat—lots of wheat. Here’s why this matters, courtesy of the Wall Street Journal:

Iran is ramping up imports of wheat, including rare purchases from the U.S., in a sign Tehran is building a strategic stockpile of grain in anticipation of harsher sanctions or even military conflict…Such a maneuver could bolster the Islamic regime at a time when the West is increasing pressure over Iran’s disputed nuclear program, including curbing purchases of Iran’s oil and freezing its government banks out of international networks.

Current U.S. sanctions allow companies to sell food to Iran. Access to wheat is crucial for the country, enabling it to prevent spikes in the cost of bread, a key staple among its 78 million citizens. Such spikes have in the past led to social unrest in Iran and elsewhere in the Middle East.

The Iranians have also purchased wheat shipments from Brazil, Australia, Russia, Germany, and others over the past few months, and is in negotiations for what might be a three-million-ton buy from India, with imports on track to rise even more. The US Department of Agriculture estimates Iran will import 2 million metric tons of wheat through June 2012, which constitutes a tenfold jump from a February estimate, and enough to cover roughly 13 percent of Iran’s annual consumption, according to data compiled by the USDA.

“With any number of unknowns out there—a potential attack on its nuclear facilities, the possibility that a different administration takes office in the United States—the regime is prudently laying aside [food] stocks in the event things go very wrong,” said J. Peter Pham, a director with the Atlantic Council told Reuters.

But even in times that weren’t marked by such bellicose rhetoric, the Iranian regime has been known to indulge in ramping up American imports. During the Bush years, US exports to Iran grew more than tenfold, including over $158 million worth in cigarettes. Other hot items include fur, perfume, military apparel, bras, and bull semen.