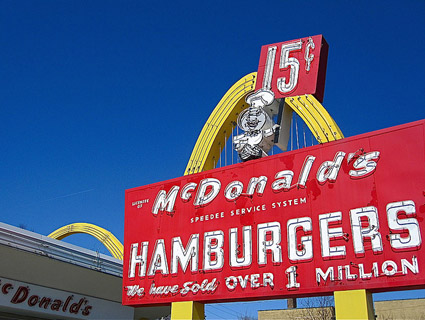 Add another name to the list of corporations who’ve ditched the American Legislative Exchange Council: McDonald’s.

The fast food giant tells Mother Jones that it recently decided to cut ties with ALEC, the corporate-backed group that drafts pro-free-market legislation for state lawmakers around the country. “While [we] were a member of ALEC in 2011, we evaluate all professional memberships annually and made the business decision not to renew in 2012,” Ashlee Yingling, a McDonald’s spokeswoman, wrote in an email. Yingling didn’t mention any specific campaign or outside pressure as playing a role in the company’s decision to leave ALEC.

An ALEC spokeswoman did not respond to a request for comment.

McDonald’s sought to clarify its relationship with ALEC after a coalition of progressive groups with members in all 50 states, including Common Cause and Color of Change, announced plans on Tuesday to target McDonald’s for its ongoing membership in ALEC. Rashad Robinson, Color of Change’s executive director, said groups in the coalition were “flooding” McDonald’s, Johnson & Johnson, and State Farm with phone calls demanding they stop backing ALEC. “Major corporations like Pepsi, Coca-Cola, and Kraft understand that supporting voter suppression efforts and dangerous ‘Stand Your Ground’ legislation puts their brands at great risk in the black community,” Robinson said. “We hope that McDonald’s, Johnson & Johnson, and State Farm also get that message. Today, our members are flooding these companies with phone calls to demand that they stop supporting ALEC.”

“Clearly, some of these companies—Coke, Pepsi, McDonald’s—realize that it doesn’t make good business sense to be part of ALEC when ALEC has come under increased scrutiny,” said Mary Boyle, Common Cause’s vice president of communications, when told of the company’s departure from the group.

The news of McDonald’s leaving ALEC comes amidst several other high-profile departures by big-name corporations. Last week, Coca-Cola said it had decided to leave ALEC after taking heat from Color of Change and other progressive groups. Soon after, Kraft, Pepsi, and Intuit (which makes Quicken personal finance software) followed suit by ending their memberships with ALEC.

Activists have singled out ALEC’s so-called voter ID bills in their campaign against the 38-year-old organization cofounded by conservative leaders Paul Weyrich and Lou Barnett. Color of Change has slammed voter ID legislation, which claims to crack down on voter fraud, as “discriminatory” against blacks and Hispanics. “No longer is the black vote suppressed through violence, intimidation and literary tests,” Color of Change has said in a statement. “It’s now suppressed through laws that make it burdensome and difficult for many black folks to vote.”

Color of Change launched its broader anti-ALEC campaign last December. But it’s not the only group to take aim at ALEC. As Mother Jones reported, in February occupiers around the country protested ALEC as part of a campaign against corporations’ power in politics. “We are rejecting a society that does not allow us to control our future,” read the website for Shut Down the Corporations, the website for the Occupy movement’s ALEC protests.

UPDATE: The Huffington Post reports that, in a February 29 letter to Color of Change, a McDonald’s official said the company remained a member of ALEC. The letter, which raises questions about McDonald’s claim to have left ALEC, appears to be written by Pat Harris, whose title is global chief diversity officer. We’ve updated the headline of our story to make it clear that it was a McDonald’s spokeswoman who says the company has left ALEC.