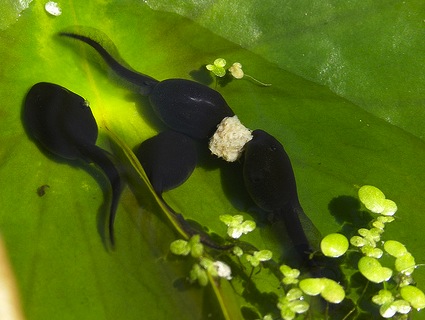 Syngenta’s atrazine isn’t the only widely used herbicide that appears to have bizarre effects on frogs. According to a study (PDF) from University of Pittsburgh ecologist Rick Relyea, Monsanto’s flagship weedkiller Roundup—by far the most-used herbicide on the planet—not only has lethal effects on tadpoles at doses found in ponds near farm fields, but it also literally changes their shape in ways that mimic tadpole’s reaction to predators.

The herbicide atrazine turned a male frog female. Is it affecting us too?

For his paper, published in the peer-reviewed journal Ecological Applications, Relyea created conditions in outdoor tanks that mimicked natural wetlands and added tadpoles from three different frog species to the tanks. Some of the tanks contained caged predators (newts and dragonflies) and some didn’t. He then exposed the tanks to several different Roundup concentrations—all of them at levels found in ponds in and around farm fields—and waited several weeks.

He found that in the tanks without predators, Roundup decimated the tadpole populations at concentrations of 3 milligrams per liter—a result that jibes with a 2005 paper Relyea published. It’s what happened to the survivors that surprised him. He found that surviving tadpoles subjected to Roundup experienced shape changes that almost exactly mimicked their response to predators. Here’s how Relyea explained his result to Science Daily:

It was not surprising to see that the smell of predators in the water induced larger tadpole tails….That is a normal, adaptive response. What shocked us was that the Roundup induced the same changes. Moreover, the combination of predators and Roundup caused the tail changes to be twice as large.

The presence of predators alters hormones in the tadpoles, in turn triggering the shape changes, Relyea explains in the paper. It works like this:

The fact that Roundup causes a nearly identical response could mean that the ubiquitous herbicide is interfering with tadpoles’ hormones, Relyea adds.

Relyea’s latest experiment builds on one from 2005, in which he found that low levels of Roundup in field-simulated conditions devastated not only tadpole populations, but also those of frogs. (Monsanto responded to Relyea’s 2005 study; and Relyea rebutted Monsanto’s response.)

The severe decline of frog and other amphibian populations over the past three decades likely has several causes, including habitat loss and climate change. But Relyea’s work on Roundup, like that of UC Berkeley scientist Tyrone Hayes on atrazine, strongly implicates herbicides as a factor. And what’s bad for for frogs may be bad for us, too. Previous research has suggested that the surfactants used by Monsanto in Roundup damage human cells.  And we also know that Roundup is commonly found in air and water in farm states. “It is out there in significant levels. It is out there consistently,” the head of the agricultural chemicals team at the US Geological Survey Office told Reuters last year.

As Relyea told Science Daily, “amphibians not only serve as a barometer of the ecosystem’s health, but also as an indicator of potential dangers to other species in the food chain, including humans.”