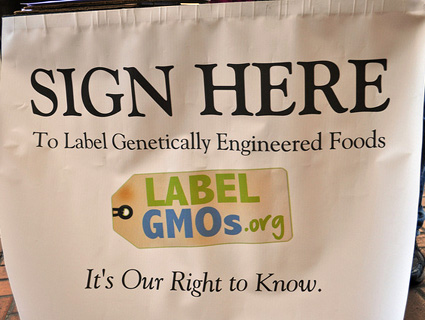 In November, California voters will decide on a ballot initiative that would require labeling of all foods containing ingredients from genetically modified crops. The initiative made it to the ballot after almost 1 million Californians signed a petition in favor of it—nearly double the 504,760 signatures needed under the state’s proposition rules. The campaign that organized the push to get the measure on the ballot focused on possible health effects of GMO foods.

This news will not likely be applauded by my friends over at Croplife America, the main trade group of the GM seed/agrichemical industry. The big GMO crops—corn, soy, sugar beets, and cotton—are processed into sweeteners, fats, and additives used widely by the food industry. Everything from high fructose corn syrup-sweetened Coke to soybean oil-containing Hellman’s mayo would have to bear a label reading something like “Contains GMO ingredients.”

That would send a shockwave through the food industry—one that could ultimately be felt on the industrial-scale US farms that have been devoting their land to GMO crops for years, and the companies that profit from selling them patented seeds and matching herbicides. The reason isn’t just that California represents an imposing chunk of the US food market. It’s also that a food-labeling law that starts in California is unlikely to stay in California.

To see why, look at the case of another practice beloved of US agribusiness: that of stuffing egg-laying hens into cages so tight that they can’t turn around.

Back in 2008, California voters mulled a ballot initiative to ban that production method by 2015. The egg industry fought the proposal bitterly—but Proposition Two (as it was known) won anyway, by a margin of nearly two-to-one. Two years later, the California legislature passed a law applying the new rules to all eggs sold in the state—foiling the industry’s threat to close shop in California and send in eggs from hens caged in other states.

But the initiative was never really just about California. Its main champion, the Humane Society of the United States, was clear about that from the start. As HSUS’s Paul Shapiro told Grist weeks before the 2008 vote, “Nobody can ignore the fact that California is the largest agricultural state in the country and it’s often a trend-setting state. We envision national reforms coming from passage of Prop. 2.”

Shapiro’s words proved prescient. In July 2011, less than three years after the California initiative’s passage, executives from the egg industry’s main trade group joined forces with their peers from HSUS to propose national legislation that would essentially make the California rules the law of the land. The legislation hasn’t gone anywhere yet, but with the industry vowing to support and not crush it in Congress, the days of stuffing hens in tiny cages seem numbered.

Why did the egg industry crack? Did these hard-boiled execs experience a sudden pang of conscience over the plight of the millions of hens confined in their egg factories? More likely, they were acting in deference to a basic law of capitalism: differentiation costs money. Nearly 38 million people live in California—12 percent of the entire US population, and 17 percent of the US egg market, according to the USDA. It’s costly and cumbersome to apply one set of production rules to eggs for California’s vast horde of consumers, and another to everyone else.
So the egg industry wants a set of standards that applies nationwide.

Similarly, if massive food processors like Kraft and Unilever are forced to label essentially all of their products just for the California market, it likely won’t be long before they’re pushing for national labeling—or simply just labeling everything for the national market.

It’s hard to say how consumers would react to national GMO labeling, but there’s evidence that a substantial portion of them might reject GMOs and demand alternatives. A recent national poll by the Mellman Group found that 91 percent of respondents favored GMO labeling, a result that was roughly consistent among Democrats, Republicans, and independents. The fact that they want that information suggests that they may be willing to act on it.

If they do, they’ll initially find that the only way to avoid GMOs is to buy certified-organic products, which by USDA code can’t contain GMOs. As of last year, genetically modified seeds accounted for 94 percent of US soy and three-quarters of corn and cotton (which makes it into the food supply in the form of cottonseed oil, a popular fat for the food industry). A move to labeling would likely create a robust market in non-GMO, conventional versions of those crops, giving large-scale farmers incentive to transition away from GMOs and cutting into the profits of giants like Monsanto, Syngenta, and DuPont. If a substantial percentage of them did, that would be a hard blow to the profit plans of the big agrichemical companies, whose business models are based on constant growth, not shrinkage.

As I’ve written before, herbicide-tolerant GMO technologies have pushed US farmers to apply ever greater doses of ever-more toxic herbicides. New-generation GM seeds from Monsanto and Dow promise to accelerate that trend. So far, regulatory agencies like USDA and EPA have proven utterly unable to check this slow-motion, GMO-generated gusher of agrichemicals onto our prime farmland and ultimately into the water of millions of people.

Where regulators have failed, California’s voters might ultimately make a difference.