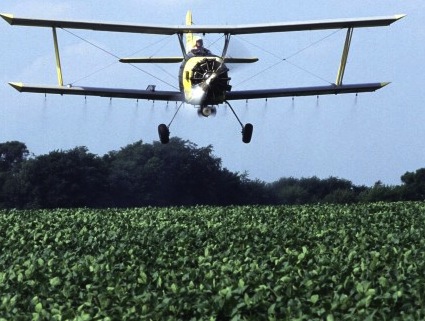 In early July, on the sleepy Friday after Independence Day, the USDA quietly signaled its intention to green-light a new genetically engineered soybean seed from Dow AgroSciences. The product is designed to produce soy plants that withstand 2,4-D, a highly toxic herbicide (and, famously, the less toxic component in the notorious Vietnam War-era defoliant Agent Orange).

Readers may remember that during an even-sleepier period—the week between Christmas and the New Year—the USDA made a similar move on Dow’s 2,4-D-ready corn.

If the USDA deregulates the two products—as it has telegraphed its intention to do—Dow will enjoy a massive profit opportunity. Every year, about half of all US farmland is planted in corn and soy. Currently, Dow’s rival Monsanto has a tight grip on weed management in corn-and-soy country. Upward of 90 percent of soy and 70 percent of corn is engineered to withstand another herbicide called glyphosate through highly profitable Monsanto’s Roundup Ready seed lines. And after so many years of lashing so much land with the same herbicide, glyphosate-resistant superweeds are now vexing farmers and “alarming” weed control experts throughout the Midwest.

And that’s where Dow’s 2,4-D-ready corn and soy seeds come in. Dow’s novel products will be engineered to withstand glyphosate and 2,4-D, so farmers can douse their fields with both herbicides; the 2,4-D will kill the weeds that glyphosate no longer can. That’s the marketing pitch, anyway.

The USDA, for its part, is buying what Dow is selling. In May, the agency released its Draft Environmental Assessment for the product, declaring that its “preferred alternative” was to deregulate it. And on July 13, USDA put out its “Plant Pest Risk Assessment” for it. This is a key document in the regulatory process for GMOs. Under the industry-friendly framework for GMO oversight cobbled together in the early ’90s by then-Vice President Dan Quayle, the USDA can only regulate genetically modified organisms if they literally pose a risk to other plants as defined by the Federal Plant Pest Act. This is a very high bar; and as happens with nearly all GMO applications, the USDA’s assessment of Dow’s novel soy concluded that it’s “highly unlikely to pose a plant pest risk.”

With those hurdles cleared, the USDA is now seeking public comments on the product until September 11, 2012, after which point it will make a final decision. Dow’s 2,4-D corn product has already gone through the comment process—during which time the USDA received 365,00 opposing it. A USDA press officer told me that the agency is “still considering comments” and had no timetable for a final decision.

Once these products lurch through the USDA’s process toward almost certain deregulation, the Midwest faces a veritable gusher of 2,4-D. It’s already the third-most-used US herbicide, after glyphosate and atrazine. If Dow gets it’s way, we ain’t seen nothing yet.

What happened with glyphosate after the introduction of Roundup Ready technology provides a preview of 2,4-D’s prospects. According to an analysis of USDA data by the Center for Food Safety, farmers applied 4.9 million pounds of glyphosate to soybean crops in 1994, the year before Roundup Ready seeds hit the field. By 2006 (the last year for which there is data), glyphosate use in soybeans had hit 96.7 million pounds—a nearly 20-fold increase. Overall, CFS found, glyphosate use in soy, corn, and cotton jumped by a factor of 15 between the mid-’90s and 2006, as Roundup Ready technology conquered farm country.

The USDA’s own Draft Environmental Assessment reveals potential for vast expansion of 2,4-D use. According to the report, just 3 percent of total US soybean acres were treated with 2,4-D in 2006. If Dow’s new seeds are embraced by farmers as the antidote to glyphosate-resistant weeds, that number will jump dramatically. And as 2,4-D expands its geographic reach, it will also be used in greater amounts per acre—by a factor of as much as three, the USDA assessment reveals.

What can dousing millions of acres of farmland with 2,4-D mean? The EPA insists that it’s safe and recently brushed off a petition by environmental groups insisting that it be banned. But it has been shown to get into drinking water, and the environmental group Beyond Pesticides has assembled an impressive dossier of research on its ill health effects, including evidence that it causes non-Hodgkins lymphoma and acts as an endocrine disruptor. Nor is there any research on how 2,4-D and glyphosate affect human and wildlife health in combination.

2,4-D also has a tendency to drift far and wide upon application. This past June in California, a farmer who sprayed 1,000 acres of pasture with 2,4-D inadvertently damaged 15,000 acres of cotton and a pomegranate orchard, Western Farm Press reports. The drift reached as far as 100 miles away from the sprayed land. Dow insists it has conjured up a new form of 2,4-D that is much less prone to drift than the kind currently in use. But as Center for Food Safety has put it, the new formulation’s “efficacy has not been independently validated; and in any case, neither EPA nor Dow will be able to prevent the use of cheaper, highly-drift prone formulations.”

Most damningly of all, the new product is highly unlikely to end the problem of weed resistance, as this 2012 paper by Penn State University researchers shows (which I wrote about here). More likely, they conclude, Dow’s novel seeds will generate new generations of superweeds—which will almost certainly require a another round of new chemical cocktails.