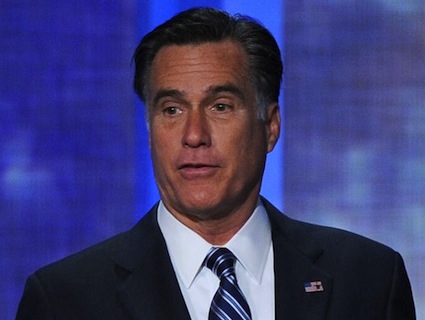 Mitt Romney hasn’t divulged many details about what kind of agriculture policy he’d pursue as president. (Sound familiar?) But all signs suggest that he’d follow the agribiz party line. As Wayne Barrett showed in a recent Nation piece (my comment here), Romney has ties to agribusiness giant Monsanto that date to the ’70s, when GMO seeds were an R&D project, not a business model. According to Barrett, Romney, then a young Bain consultant, helped nudge Monsanto on its path away from disgraced industrial chemical concern toward its current status as world-beating agribiz player. Then there’s the agribiz execs and shills the GOP nominee tapped for his campaign’s Agriculture Advisory Committee.

But guess what? In the privacy of his campaign jet, the beleaguered presidential contender apparently eats organic, reports the Today show’s Peter Alexander:

And, while I’ve never been invited up front, sources close to the campaign tell me the shelves are stocked with a wide variety of healthy fare. Kashi cereals, hummus, pita as well as organic applesauce. Everything’s organic, I’m told, including the ingredients to Romney’s favorite, peanut butter and honey sandwiches.

Nor is this the first time the Romney family has been linked to organic food. Get a load of this 2002 profile of Ann Romney from the Worcester (Mass.) Telegram & Gazette:

Mrs. Romney was introduced to several practitioners of holistic medicine, who persuaded her to adopt alternative therapies. She now eats organic foods and very little meat. She practices reflexology and undergoes acupuncture treatments. She credits the lifestyle with turning her health around.

I have calls and emails into the Romney campaign to confirm these reports. I have yet to hear back. But if they’re true—and it’s hard to imagine either the Romneys or the journalists would make them up—Romney would hardly be the only prominent politician to publicly promote genetically modified foods while privately avoiding them by sticking to organics. (USDA organic code forbids GMOs from any food labeled organic, along with the application of synthetic fertilizers and pesticides).

Indeed, he’s following a tradition that dates to Bill Clinton, includes George W. Bush and his family, and is alive and well in the White House of Romney’s opponent, Barack Obama. What’s my evidence that the Clintons and Bushes ate organic? Get this, from someone who knows—Walter Scheib, who served as White House executive chef during the Clinton and Bush years:

From 1994 to 2005 I was the executive chef at the White House. This offered me not only the personal honor of serving two unique and interesting first families, but the professional challenge of fulfilling Hillary Clinton’s mandate of bringing contemporary American cuisine and nutritionally responsible food to the White House.

This meant that nearly all the product used was obtained from local growers and suppliers. There was a small garden on the roof of the White House where produce was grown.

The ethic of the purchasing and the cooking at the White House under my direction and under the continuing direction of [current Obama White House executive chef] Cris Comerford is one of respect for the pedigree of the product and manner it is grown, gathered, raised or caught.

The Clinton and Bush families dined regularly on organic foods. Both wagyu and grass-fed beef were frequently used.

And here’s Scheib again, in an interview with the blog Obama Foodorama, on Hillary Clinton’s unheralded rooftop veggie garden:

“Not certified organic,” Mr. Scheib said. “But everything was absolutely grown without pesticides and fertilizers. I guess it’s what these days we call ‘natural.'”

And “the emphasis on organics became even more important when the Bushes arrived in the White House,” Obama Foodorama reported. “Laura Bush was ‘adamant’ about organics, according to Mr. Scheib.” Scheib also told the New York Times that Laura Bush “insisted that fresh, organic foods be served in the White House,” but she just didn’t talk “much about it outside the house.”

While the Clintons and Bushes quietly dined on organic and grass-fed, their administrations pushed policies that propped up industrial agriculture and the companies that dominate it. Clinton promoted GMOs to the very end of his term—a cause his wife Hillary has kept up as secretary of state. At least Clinton was fairly progressive on maintaining strict USDA standards for organic farming; Bush matched Clinton’s zeal for propping up industrial farming but also tried to weaken organic standards.

As for the Obamas, Michelle Obama, unlike her predecessors, was pretty open about her preference for organics—at least at first. For a pre-election 2008 profile, Ms. Obama told the The New Yorker that “in my household, over the last year we have just shifted to organic.” She added a little critique of a famous industrial-food sweetener:

And the fruit-juice-box thing, and we think—we think—that’s juice. And you start reading the labels and you realize there’s high-fructose corn syrup in everything we’re eating. Every jelly, every juice. Everything that’s in a bottle or a package is like poison in a way that most people don’t even know…

And, of course, soon after she moved into the White House, Ms. Obama famously broke ground on an organic garden on the lawn—and launched a campaign to inspire children to make healthier food choices.

But the agrichemical industry quickly chided the Obamas for not using “crop protection products” (i.e., pesticides) in their garden; the administration began making pro-agribiz appointments and policy moves (a trend that continues to this day); and Michelle Obama shifted her kids’ health campaign to emphasize exercise over diet change.

Now the Obamas appear to have settled into the pattern established by their predecessors: privately eat organic while publicly maintaining the food system status quo—a pattern that Romney, if he wins, seems ready to maintain. So, organic for the elite, GMOs for everyone else? That’s precisely the kind of exclusive mindset that gives organic food a bad name.