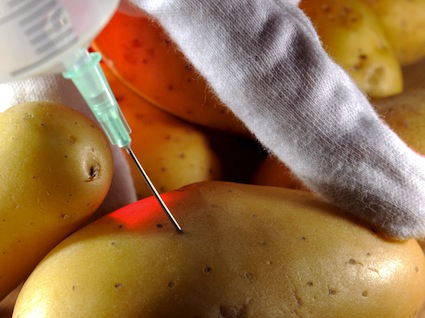 “GMO Opponents Are the Climate Skeptics of the Left,” declares the headline of a recent piece by Keith Kloor in Slate. The argument goes like this: Just as certain conservative writers flout science by denying the urgency of climate change, there are progressive writers—he named me as a prominent example—who defy an alleged scientific consensus by criticizing the genetically modified crop industry. We’re hypocrites, the charge goes, because we thunder against the denial of good science when it comes to climate, but indulge in denialism when it comes to GMOs.

I think Kloor’s critique is nonsense. Sure, there are wackos who campaign against GMOs, but not all GMO critique is wacko. In a 2009 roundtable in Seed Magazine, I debunked the idea that there’s a scientific consensus around GMOs analogous to the one around climate. I also ruminated on that theme in this 2009 review of Michael Specter’s book Denialism. I plan to return to the theme of scientific consensus and GMOs soon, but to make a long story short, I’ll quote my Seed piece:

The consensus around climate change developed in spite of a multi-decade campaign by some of the globe’s most powerful and lucrative industries—the petroleum and coal giants—to protect markets worth hundreds of billions of dollars. The consensus around GMOs—or at least the specter of one—arose through the lobbying and support of an industry desperate to protect its own multibillion-dollar investments.

If such a pro-GMO consensus existed, surely we’d find it in the the International Assessment of Agricultural Knowledge, Science and Technology for Development (IAASTD), a three-year project, convened by the World Bank and the United Nations and completed in 2008, to assess what forms of agriculture would best meet the world’s needs in a time of rapid climate change. Widely compared to the Intergovernmental Panel on Climate Change (IPCC), which definitively established a scientific consensus around climate change on its release in 2007, the IAASTD and its 400 scientists from around the globe ended up taking quite a skeptical view of GMOs—so much so that CropLife International, the trade group for the global GMO seed/pesticide industry, denounced it. “Incredibly enough, the report overlooks the vast potential and highly successful roles of crop protection and plant biotechnology, and misconstrues these products’ risks,” the group’s CEO fumed. Only 3 of the 57 governments that participated refused to sign the IAASTD: the Bush II-led United States, Canada, and Australia.

Exhibit A is Henry Miller, not the late bawdy novelist but rather the political writer. Miller is by no means a marginal figure within pro-GMO circles. He recently took a prominent role in the campaign to defeat California’s Proposition 37, a ballot initiative to be decided on November 6 that would require the labeling of most GMO ingredients in food sold in California. (I wrote about it here.) The agrichemical industry, led by GMO seed giant Monsanto, has generously funded a campaign to defeat Prop. 37. According to a recent analysis by Pesticide Action Network, Monsanto and its peers have so far poured more than $20 million into the “No on 37” campaign, supplemented with another $15 million from GMO ingredient-using junk-food makers like Pepsi, Coca-Cola, and Nestlé.

Some of that cash went into producing a TV commercial starring Miller spouting the campaign’s talking points against the proposition.

The ad originally identified Miller as “Dr. Henry I. Miller M.D., Stanford University,” shrouding him in the scientific glory of a great institution. But at the behest of Stanford, the campaign had to edit the ad to give a fuller picture of what Miller represents, the Los Angeles Times reported several weeks ago. Miller, as the anti-Prop 37 ad now states, is actually a fellow at Stanford’s Hoover Institution. Hoover is an avowedly conservative think-tank funded by right-wing foundations like Scaife and Bradley, as well as corporations like Exxon and agribusiness giant Archer Daniels Midland.

When he’s not pushing GMOs, Miller can be found defending the endocrine-disrupting, ubiquitous industrial chemical BPA against scientific critics, exposing “Rachel Carson’s Deadly Fantasies,” decrying “Obama’s radical agenda,” and making the case for why you should want “pink slime” in your hamburger. In a 2010 op-ed in the Orange County Register called “Adapt and Survive Gore’s Apocalypse,” Miller aired out his view on climate. “Assuming for the sake of argument that the Earth is, indeed, warming and even that it’s due to human activities,” he declared, “any significant lowering of emissions will be too costly, too little and too late.” In other words, the only reasonable response to the climate threat (assuming it really exists!) is no action at all. Well, he did allow for one exception:

Actions to reduce emissions should only be undertaken if they’re likely to be cost-effective and if they have desirable secondary effects as well; an example would be a significant shift from fossil fuels to nuclear power.

Miller is also listed as an “adjunct scholar” at the ExxonMobil-funded Competitive Enterprise Institute, which specializes in denialist “straight talk on global warming.”

He’s hardly alone in his role as climate skeptic and GMO enthusiast. Dennis T.  Avery, senior fellow at the Hudson Institute, has for years both zealously promoted GMOs and bucked the scientific consensus on climate. Martin Livermore, director of the UK-based Scientific Alliance, has opined that “all those scientists may still be wrong” on climate change, and sung the praises of GMOs.

The general shtick here is to defend large, lucrative industries against critics and regulators. In that light, there’s no contradiction in opposing action on climate change while also pushing GMOs.