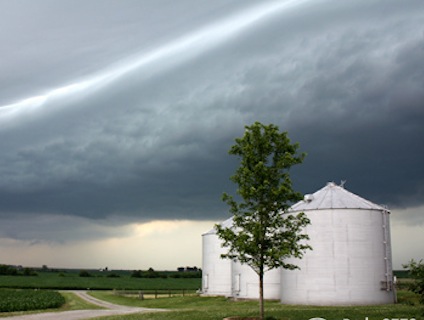 Farmers have always lived with what the novelist Henry James called the “imagination of disaster”—the keen sense that there’s always something, anything, that can go wrong. In that long interval between sowing tiny seeds and reaping valuable crops, droughts, floods, plagues of pests, tumbling trees, ravaging beasts—all threaten your livelihood and haunt your dreams. But the last seven years have been ridiculous.

In 2005, the sixth-most powerful hurricane ever recorded blitzed into the Mississippi River Delta region, flattening $900 million worth of crops. Just two years after Katrina, a “500-year flood” visited the Midwestern corn belt—which, as the US Geological Survey pointed out at the time, marked the second “500-year flood” in 15 years. In 2011, Texas suffered the most severe 12-month drought in its recorded history, resulting in a stunning $5.2 billion in crop and livestock losses, eclipsing the state’s previous record high in crop losses set just five years earlier. Then came last August’s Hurricane Irene, which deluged farmlands and destroyed crops from Puerto Rico to Canada, taking a particular toll on farmers in Vermont and New York State. This summer, farmers in the Midwest suffered the worst drought in a generation—which cut into crop yields and sparked yet another global hunger crisis. And now comes unprecedented “superstorm” Sandy.

It’s still too early to assess the damage exacted by Sandy on farms. It will likely be lighter than the other catastrophes listed above, both because farmers had ample warning to prepare for it, and because summer crops, for most farms the year’s highest-value plantings, have already been harvested (although many farms still have plenty of winter-season vegetables and farm animals at this time of year.)

But it’s not too early to marvel at the frequency with which Biblical-scale natural calamities now bedevil us. Writing in Scientific American in 2011, John Carey observed:

In this year alone massive blizzards have struck the U.S. Northeast, tornadoes have ripped through the nation, mighty rivers like the Mississippi and Missouri have flowed over their banks, and floodwaters have covered huge swaths of Australia as well as displaced more than five million people in China  and devastated Colombia. And this year’s natural disasters follow on the heels of a staggering litany of extreme weather in 2010, from record floods in Nashville, Tenn., and Pakistan, to Russia’s crippling heat wave.

The culprit for routine “extreme weather” is becoming obvious. Cary writes that “scientists used to say, cautiously, that extreme weather events were ‘consistent’ with the predictions of climate change.” There were lingering questions about whether extreme weather events were on the rise—or whether people were just paying increased attention to them. That idea has crumbled under the weight of data. Cary quotes Peter Höppe, head of the European reinsurance giant Munich Re’s Geo Risks Research/Corporate Climate Center, who “has compiled the world’s most comprehensive database of natural disasters, reaching all the way back to the eruption of Mount Vesuvius in A.D. 79”:

Our figures indicate a trend towards an increase in extreme weather events that can only be fully explained by climate change… It’s as if the weather machine had changed up a gear.

Even US government scientists acknowledge the connection. “Now we can make the statement that particular events would not have happened the same way without global warming,” Kevin Trenberth, head of climate analysis at the National Center for Atmospheric Research (NCAR), tells Carey.

What does the rise of a hyper-volatile climate mean for farms—and our food supply? As it developed over the past century, industrial agriculture promised to dampen the inherent risks of farming. For soil fertility, farmers no longer had to rely on the process of recycling nutrients—they could merely buy fertility in a bag or a barrel, in the form of nitrogen synthesized with fossil fuels and mined potassium and phosphorous. Got an insect infestation or a plague of weeds? Turn to toxic chemicals. These innovations, leveraged by the rise of genetically modified crops in the 1990s, dramatically simplified farming and made it more efficient: farms got bigger and bigger, requiring less and less labor. Diversification gave way to specialization; biodiversity, on which farms had relied on for millennia, gave way to monocrops.

But there’s nothing you can buy in a bag that can protect a crop from flood or withering drought. During the great floods of June 2008, Midwestern farm fields were losing nitrogen fertilizer at the rate of 4 percent per day. And during this summer’s drought, neither all the fertilizer in the world, nor GMO crops, could save the Midwest’s vast corn fields from severe losses.

As the great Iowa State University agricultural thinker Fred Kirschenmann observed earlier this year, we have for decades been designing agriculture for “maximum, efficient production for short-term economic return,” based on the assumption of relatively stable weather and cheap fossil resources. But now weather has turned chaotic and energy prices have become volatile. Kirschenmann made the obvious point that we need to develop a farming system that’s “more resilient and productive in unstable conditions.”

Fortunately, we know how at least to start doing that. A recent paper in Nature (which I wrote about here) found that “soils managed with organic methods have shown better water-holding capacity and water infiltration rates and have produced higher yields than conventional systems under drought conditions and excessive rainfall.” And a recent PLOS One paper found that restoring multiple crops rotations in the Midwest—moving away from simple, efficient corn/soy rotations and reinstating biodiversity—would maintain crop yields with much less agrichemical use.

In this dismal political season, nearly every important issue is being ignored—none more so than the problem of maintaining food production at a time of rapid climate change. But the problem isn’t going anywhere. No one can predict what the next crop-destroying “natural” event will be. But it’s becoming all too easy to predict that it will be coming soon. It no longer takes much imagination to ponder agricultural disaster. You’ve got to be wearing blinders to miss it.