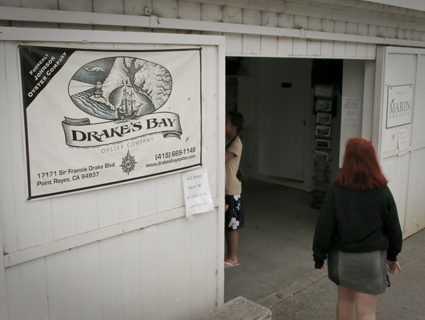 Last week, the Interior Department announced its decision to let a historic Northern California oyster farm’s permit expire to make way for the West Coast’s first marine wilderness. In response, the Drakes Bay Oyster Company’s owner, Kevin Lunny, filed suit this week in hopes of saving his company. That’s not a big surprise: Lunny told the San Francisco Chronicle that the news had left him in “disbelief and excruciating sorrow.” Here’s the twist: As the East Bay Express reported, Lunny is being represented by a low-key, free-market advocacy group—a somewhat strange bedfellow for a company that bills itself as a environmentally sustainable operation and has enjoyed strong support from Sen. Dianne Feinstein (D-Calif.).

The group representing Drakes Bay Oyster Company, Cause of Action, is run by Dan Epstein, a former GOP counsel on the House’s Committee on Oversight and Government Reform under California Republican Darrell Issa. Epstein is also a veteran employee of billionaires Charles and David Koch; he used to work at the Charles G. Koch Charitable Foundation and for a Koch Industries lawyer. Epstein supports Lunny’s lawsuit against the National Park Service and the Interior Department, he said in a statement, because “we refuse to let the NPS and Secretary Salazar get away with exerting power that destroys a business and a community under the guise of authorized discretion.”

Cause of Action alleges that the government failed to fulfill its obligation to conduct a proper environmental review and relied on flawed science showing that the oyster farm harmed the environment in its decision not to renew its permit. But in reality, according to interior secretary Ken Salazar, the decision was made to avoid setting a precedent that would threaten longstanding National Park Service policy to let permits expire on public land chosen by Congress to become wilderness. (Congress flagged Drakes Estero, where the oyster farm has operated since the 1930s, as a “potential wilderness” site in 1976.)

Epstein’s advocacy work, in any case, hasn’t always been so noble as coming to the rescue of a family business. After congressional conservatives slipped a measure into a recent spending bill that banned federal grants from going to 501(c)(4) non-profits engaged in lobbying, Cause of Action sent letters to at least 20 groups using federal money to fight obesity and tobacco use, warning them they might be sued. The group said it sent the letters “only as a convenience,” but critics contended it was an attempt to intimidate the non-profits.

This time, no one can claim that Esptein is hiding his free-market, Koch-esque motive for helping Drakes Bay Oyster Company: “Cause of Action is committed to ensuring that federal agency decision-making that can affect economic prosperity in the United States is held to the scrutiny of public accountability,” his statement also read.