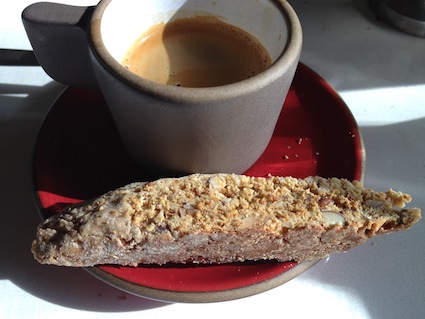 Admit it: You’re bored with “Christmas cookies.” They’re cloyingly sweet, they’re bland, and they can be hard on the eyes, with their “festive” shapes and garish colors. What to make in their place?  The holiday season demands a special snack—one that adults can nibble with coffee and kids can inhale as a treat. Biscotti, the famed Italian cookies, aren’t an obvious substitute. They’ve become ubiquitous in US coffee shops; and are too often served stale, oversweet, and not worth the often-two-bucks-a-pop price tag.

Here’s the thing. Homemade biscotti, nutty and slightly salty, are terrific—and they’re pretty easy to make. And because they get much of their substance from nuts, they’re a more wholesome snack than the usual flour-dominated holiday cookies. And they’re versatile—while they’re best-known in the US as a foil for coffee, the Italians also enjoy them dunked into the famous Tuscan dessert wine vin santo.In her Zuni Cafe Cookbook, from which I learned to make biscotti, the great San Francisco chef-restaurateur Judy Rogers suggests serving them with Champagne. Meaning that you might want to bust out a second batch for New Year’s Eve. 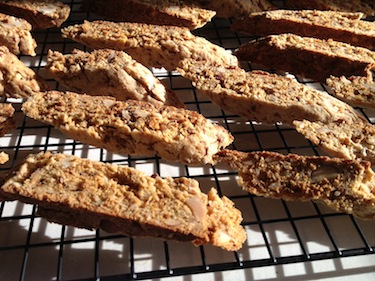 Sure, the kids may judge them insufficiently sweet. Humbug! That just means more for you. So put down that Santa-shaped cutter and get busy. You’ll be telling me prego when you taste the results.

In the below version, I took Rogers’ recipe, which spices the cookies with anise seeds, and amped it up with orange zest, which works well with the licorice flavor of anise and delivers a seasonal edge. And in place of Rogers’ anisette, an anise-flavored liqueur,  I tried Cointreau, an orange-flavored one. Feel free to use either—and either can be replaced, in a pinch, with good old vodka. I also used—because it’s what I had on hand—a dark, minimally processed, mollasasy cane sugar. I worried that it might taste too heavy and overshadow the orange and anise flavors. In the end, though, I liked it—it gave the cookies caramel edge that complemented the other ingredients. Lighter sugars will work as well.

Rogers writes that biscotti are “best aged a few days before serving”—store them in an airtight container, she advises.

Preheat oven to 325. On a cookie sheet, toast the almonds for about 15 minutes, until they’re lightly brown and toasty-smelling.

Cream the butter and sugar in a bowl—that is, whip it with an electric beater or a whisk until it’s lightly fluffy. Add the egg, the orange zest, and the Cointreau and beat until just incorporated.

In another bowl, combine the dry ingredients—the flour, the baking powder, the salt, and the seeds—and mix well with a fork or a whisk. Now fold in the wet mixture into the dry stuff with a wooden spoon, until well incorporated. 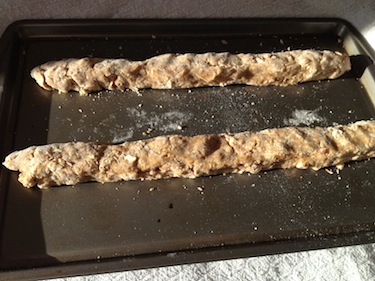 Ropes of biscotti dough, ready for the oven.

Divide the dough into two balls and place on a lightly floured surface. Using your hands, roll each ball out into a rope of 1 inch diameter.  Carefully lift the dough ropes onto a cookie sheet. (Most cookbooks, including Rogers’, command you to line the cooking sheet with parchment paper. I forgot to this time, and paid no price.)

Bake for 15-20 minutes—”until lightly brown and firm on the surface, but yielding to light pressure,” as Rogers advises.

Place the cooked logs on a cutting board. Using a large sharp knife, cut at an angle into ½ inch slices. Carefully move the biscotti back to the warm cookie sheet and bake for 5 minutes more so that they lightly brown. Allow them to cool. Enjoy immediately or store them a few days in an airtight container.