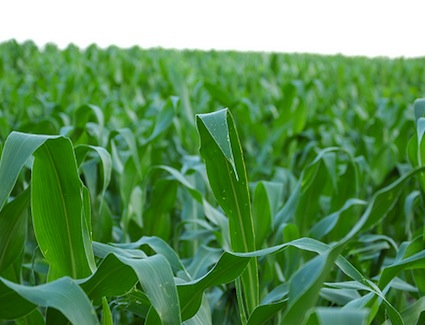 According to the biotech industry, genetically modified (GM) crops are a boon to humanity because they allow farmers to “generate higher crop yields with fewer inputs,” as the trade group Biotechnology Industry Organization (BIO) puts it on its web page.

Buoyed by such rhetoric, genetically modified seed giant Monsanto and its peers have managed to flood the corn, soybean, and cotton seed markets with two major traits: herbicide resistance and pesticide expression—giving plants the ability to, respectively, withstand regular lashings of particular herbicides and kill bugs with the toxic trait of Bacillus thuringiensis, or Bt.

Turns out, though, that both assertions in BIO’s statement are highly questionable. Washington State University researcher Charles Benbrook has demonstrated that the net effect of GMOs in the United States has been an increase in use of toxic chemical inputs. Benbrook found that while the Bt trait has indeed allowed farmers to spray dramatically lower levels of insecticides, that effect has been more than outweighed the gusher of herbicides uncorked by Monsanto’s Roundup Ready technology, as weeds have rapidly adapted resistance to regular doses of Monsanto’s Rounup herbicide.

And in a new paper (PDF) funded by the US Department of Agriculture, University of Wisconsin researchers have essentially negated the “more food” argument as well. The researchers looked at data from UW test plots that compared crop yields from various varieties of hybrid corn, some genetically modified and some not, between 1990 and 2010. While some GM varieties delivered small yield gains, others did not. Several even showed lower yields than non-GM counterparts. With the exception of one commonly used trait—a Bt type designed to kill the European corn borer—the authors conclude, “we were surprised not to find strongly positive transgenic yield effects.” Both the glyphosate-tolerant (Roundup Ready) and the Bt trait for corn rootworm caused yields to drop.

Then there’s the question of so-called “stacked-trait” crops—that is, say, corn engineered to contain multiple added genes—for example, Monsanto’s “Smart Stax” product, which contains both herbicide-tolerant and pesticide-expressing genes. The authors detected what they call “gene interaction” in these crops—genes inserted into them interact with each other in ways that affect yield, often negatively. If multiple genes added to a variety didn’t interact, “the [yield] effect of stacked genes would be equal to the sum of the corresponding single gene effects,” the authors write. Instead, the stacked-trait crops were all over the map. “We found strong evidence of gene interactions among transgenic traits when they are stacked,” they write. Most of those effects were negative—i.e., yield was reduced.

Overall, the report uncovers evidence of what is known as “yield drag”—the idea that manipulating the genome of a plant variety causes unintended changes in the way it grows, causing it to be less productive.

More encouragingly, the authors found that crop yields for GMO varieties are more stable year-to-year—that is, their yields fluctuate less than those of conventional varieties. As a result of this stabilizing effect, the authors conclude that “our results show how transgenic technology can improve farmers’ ability to deal with a risky environment,” especially given “current concerns about the effects of climate change on production uncertainty in agriculture.” Simply by planting Roundup Ready or Bt crops, they claim, farmers face less risk from yield fluctuations.

That may be true, but it’s a long way from “generating higher crop yields with fewer inputs.” And it’s not clear at all that GMOs’ marginal advantages over conventional seeds when it comes to risk mitigation trump the benefits offered by organic ag in that department. Here’s how the authors of a major paper published in Nature last year put it: