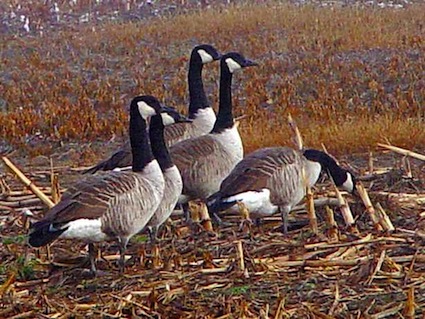 Once again this spring, farmers will begin planting at least 140 million acres—a land mass roughly equal to the combined footprints of California and Washington state—with seeds (mainly corn and soy) treated with a class of pesticides called neonicotinoids. Commercial landscapers and home gardeners will get into the act, too—neonics are common in lawn and garden products. If you’re a regular reader of my blog, you know all of that is probably bad news for honeybees and other pollinators, as a growing body of research shows—including three studies released just ahead of last year’s planting season.

But bees aren’t the only iconic springtime creature threatened by the ubiquitous pesticide, whose biggest makers are the European giants Bayer and Syngenta. It turns out that birds are too, according to an alarming analysis co-authored by Pierre Mineau, a retired senior research scientist at Environment Canada (Canada’s EPA), published by the American Bird Conservancy. And not just birds themselves, but also the water-borne insect species that serve as a major food source for birds, fish, and amphibians.

The article isn’t peer-reviewed, but Mineau is a formidable scientist. In February, he published a peer-reviewed paper in PLoS One concluding that pesticides, and not habitat loss, have likely been driving bird-population declines in the United States.

That paper didn’t delve into specific pesticides. For his American Bird Conservancy paper, Mineau and his co-author, Cynthia Palmer, looked at a range of research on the effects of neonics on birds and water-borne insects, from papers by independent researchers to industry-funded studies used in the EPA’s deregulation process and obtained under the Freedom of Information Act.

For the most vulnerable bird species, they found, consuming even two corn seeds coated with Bayer’s blockbuster neonic clothianidin can have lethal effects.

Their conclusion: Neonics are highly mobile and persistent once they’re unleashed into ecosystems, and they pose a serious threat to birds and the insects they feed on. The EPA, they continue, has in some cases severely underestimated the danger and in other cases simply ignored it. The underestimation, they argue, mainly stems from the widespread use of two bird species to judge toxicity, mallards and bobwhites. But many other bird species are more vulnerable to neonics than those two, and Mineau’s paper concludes the EPA, in its risk assessment used to register a raft of neonic products over the past two decades, “underestimates toxicity by 1.5 to 10 fold if the intent of the exercise is to protect most species, not merely mallards and bobwhites.” For the most vulnerable bird species, they found, consuming even two corn seeds coated with Bayer’s blockbuster neonic clothianidin can have lethal effects.

The authors point to several instances of EPA scientists raising serious concerns about the ecological impacts of these pesticides, only to see them registered anyway. Back in 2003, when the EPA was first considering registering Bayer’s clothianidin, an agency risk assessment concluded that “exposure to treated seed through ingestion might result in chronic risk to birds and mammals, especially mammals where consumption of 1-2 seeds only could push them to an exposure level at which reproductive effects are expected,” the authors report. The assessment also described the chemical as persistent and mobile, with “potential  to leach to groundwater as well as runoff to surface waters.” So what happened to clothianidin? A “plethora of registered uses for clothianidin followed in quick succession,” they report.  The pesticide is now used on corn, soybeans, cotton, pears, potatoes, tree nuts, mustard greens, and more.

Mineau’s paper notes in passing that the EPA also identified potential threats from clothianidin to bees as early as 2003, adding, however, that the pollinator issue is “outside the scope of the current review.” I told the sordid tale of clothianidin’s march through EPA registration despite its own scientists’ bee concerns in this 2010 post.

But the most pernicious effect of neonics on birds may be indirect: By leaching into water and accumulating in streams and ponds, neonics also attack a major component of birds’ food supply: insects that hang out in water, what Mineau calls the “bottom of the aquatic food chain.” The EPA has severely underestimated the risk to such insects, they charge. For the neonic imidacloprid, they argue, a “scientifically defensible reference level” to gauge when the pesticide causes harm to insects is 0.2 ug/l. “European regulators acknowledge that acute effects are likely at levels exceeding 0.5 ug/l,” they write. “In contrast, the EPA’s regulatory and non-regulatory reference levels are set at 35 ug/l.”

Based on Mineau’s analysis, the American Bird Conservancy is calling for a ban on the practice of using neonics to treat seed, joining a similar plea from the Xerces Society for Invertebrate Conservation. Meanwhile the EPA has been conducting a “comprehensive re-evaluation of these pesticides,” but has taken no action to stop their use, and isn’t expected to complete its review until 2018 at the earliest. Mineau told me that he presented his case on neonics and birds to the EPA last week, urging them to “speed things up a bit” on the review. I asked him how his message went over. “I didn’t get the answer, that, sure, we’ll have it done next year,” he said. Instead, he added, the agency stressed it would stick to its current process. And that means heavy neonic exposure for the birds and the bees for at least another half-decade.