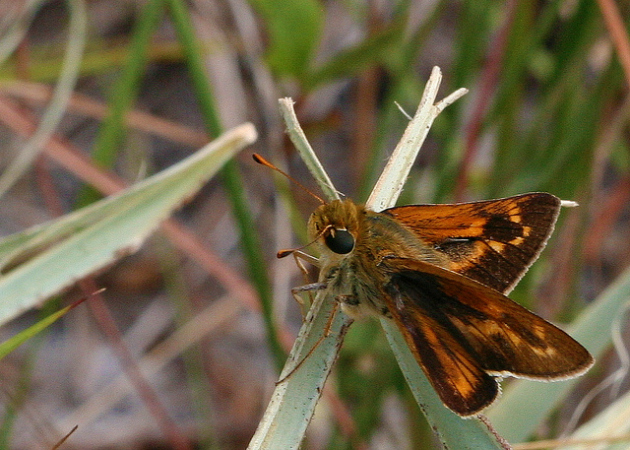 An entomologist hired by the state of Florida to find any surviving members of five rare butterflies species spent six years on the search instead of the two without finding any. “I thought I was going to find some at some point so I just took a lot more time,” Marc Minno told the Miami Herald. “They’re just not there.” He concluded that the Zestos skipper and the rockland Meske’s skipper—which haven’t been seen in more than a decade—should be declared extinct, that the Zarucco duskywing is likely extinct too, and that the nickerbean blue and the Bahamian swallowtail are now gone from their North American range: the coastal and inland forests of southern Florida. From the Miami Herald:

Considering that there have been only four previous presumed extinctions of North American butterflies—the last in California more than 50 years ago—Minno finds the government response to such an alarming wave frustrating. “There are three butterflies here that have just winked out and no one did a thing about it,” Minno said. “I don’t know what has happened with our agencies that are supposed to protect wildlife. They’re just kind of sitting on their hands and watching them go extinct.”

Worse, because these species were never listed as threatened or endangered they now fall into a limbo where the government won’t declare them extinct either. “There is no requirement for us to do anything as far as a formal announcement that it’s gone,” Ken Warren, spokesman for the Fish and Wildlife Service’s South Florida office, told the Miami Herald. Meanwhile Minno argues that something is badly awry when species vanish before the feds even begin the process of considering whether or not they’re in trouble.

Alarmed over the backlog of 757 species awaiting listing, the Center for Biological Diversity sued the Fish and Wildlife Service and won a settlement in 2011 “requiring the agency to make initial or final decisions on whether to add hundreds of imperiled plants and animals to the endangered species list by 2018.” Unfortunately that may already be too late for these five butterflies species.

The problems facing butterflies in Florida and elsewhere are complex and poorly understood, but include: climate change; urban sprawl; pesticides; hurricanes; invasive species; and all the perils associated with the genetic bottlenecks that accompany species in sharp decline. Last summer an effort was made to begin captive breeding of Florida’s Schaus butterflies, but only a handful of individuals could be found in the wild and none was a female.