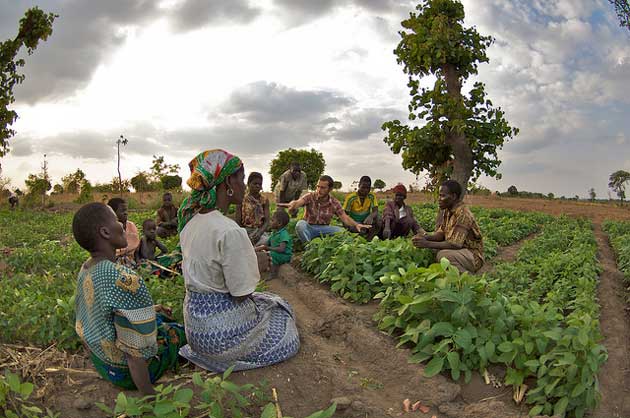 A Peace Corps volunteer talks about soy with farmers in Malawi.Courtesy Feed the Future

This week, President Obama is making his first major visit to Africa since taking office. One topic that’s likely high on his agenda: US investment in African agriculture.

With the global population expected to top 9 billion by 2050, the Obama administration is pushing hard to use foreign development funds to expand farming in the developing world, and especially in Africa. Since 2009, when Obama made a pledge at the G8 Summit in L’Aquila, Italy, to devote massive resources to global “food security,” Congress has committed more than $3.5 billion to an agricultural development program called “Feed the Future.” Congress has since renewed the initiative’s funding.

“After decades in which agriculture and nutrition didn’t always get the attention they deserved,” Obama said in an address last year, “we put the fight against global hunger where it should be, which is at the forefront of global development.”

But the US government’s motivation for investing such a large sum in Feed the Future isn’t entirely altruistic. Here’s a look at some of the other reasons behind the sudden enthusiasm for agriculture in the developing world.

I’ve heard that hunger had something to do with the Arab Spring. Is that true?
Possibly. The impetus for Feed the Future goes back to the food price crisis of 2007-08, when prices for basic commodities like corn rose dramatically all over the world. Among middle-class consumers in the United States and Europe, the spike in prices went largely unnoticed. But in developing nations such as Côte d’Ivoire and Haiti, where families typically spend a large portion of their incomes on food, it led to riots. Some observers theorized that the price spike hastened the start of the Arab Spring.

At a May 2008 hearing on the food price crisis, Sen. Richard Lugar (R-Ind.) predicted that shortages of food “are likely to recur frequently if the United States and the global community fail to open up agricultural trade and invest in agricultural productivity in the developing world.” The damage of the food crisis, he added, “likely would have been ameliorated if more of the world’s poor farmers had access to better technology, titled land, small loans, extension support, and accessible markets.”

Do US businesses stand to profit from all this new farming development in Africa?
Absolutely. Broadly speaking, the idea behind Feed the Future is to grow more food than ever before by making it easier for global agribusiness companies to invest in poor countries. As USAID head Rajiv Shah indicated at the official unveiling of Feed the Future in 2010, the agency could advocate on companies’ behalf to make investment easier in partner countries.

“If you’re from the private sector, tell us what countries and donors can do to reduce constraints on business operations,” he said.

The US government appears to already be doing this, as a recent analysis of dumped embassy cables found that the State Department had lobbied governments around the world to adopt policies allowing for the cultivation of genetically modified crops.

“[S]ome may see our work in Africa as philanthropy, but it’s much more than that,” said General Mills CEO Ken Powell at an event hosted by the World Food Prize Foundation. “It’s about creating shared value, and for our African partners, it is about unlocking opportunity—business opportunity—through knowledge-sharing.”

What’s Feed the Future done so far?
At the end of of 2012, USAID had disbursed slightly more than $1 billion of the $3.7 billion obligated by Congress for Feed the Future. The initiative has supported a wide variety of programs: In 2011, for example, PepsiCo partnered with USAID under the Feed the Future rubric to employ farmers in Ethiopia to grow chickpeas for domestic consumption, as well as for export for use in Sabra hummus. (PepsiCo co-owns the Sabra brand with the Israeli company Strauss Group Ltd.) Similarly, Walmart received USAID funding to train farmers in Guatemala to grow tomatoes for stores in Latin America. In the words of USAID’s brochure, USAID and Walmart would steer small farmers to “to more market-oriented production, based on expected consumer demand.” In 2012, Powell announced that an organization co-founded by General Mills, Partners in Food Solutions, would join with USAID to make a combined $15 million investment in training for food processors in Southern and Eastern Africa.

What’s so bad about that?
In theory, nothing. But similar efforts in the past haven’t always turned out as well as hoped. Devlin Kuyek, a researcher for the Barcelona-based nonprofit GRAIN, pointed to one relevant example: In 2007, Swiss agribusiness giant Nestlé joined with the Gates Foundation to make a major investment in the Kenyan dairy industry. According to a statement from Nestlé, the company chose the project’s Rift Valley site because of its potential for production growth. They weren’t the only ones to see an opportunity: The following year, Land O’Lakes followed Nestlé to Kenya and introduced a USAID-backed program to modernize the country’s dairy industry. In the words of Michael Yost, a manager for USDA’s Foreign Agriculture Service, the project was part of an effort to help poor countries “participate in world trade” and “bring their agricultural economies into the 21st century.”

But Kenya was self-sufficient in milk well before agribusiness came onto the scene, according to a 2003 report by the UN’s Food and Agriculture Organization. Moreover, the low-tech dairy industry provided income for an estimated 625,000 people. But by 2010, as production soared on the heels of new large-scale production, Kenya was overloaded with dairy. The price of milk dropped, and rather than sell their product at a loss, farmers began dumping it.

But a glut in production was not the only problem for Kenya’s small milk producers. In January 2013, Kenya banned the sale of raw milk, citing both safety concerns, and the need to protect the investments of large milk processors, according to media accounts. Far from supporting an existing (and functional) dairy industry, foreign agribusiness had only helped to undermine it.

But if people are hungry, what’s wrong with growing more food?
Though it may seem counterintuitive, some agricultural economists argue that you can’t fix a food price spike by growing more food. During the 2007-08 crisis, many attributed the spike to changes in the weather and a slump in global production, but global food supply fell only slightly during that time. In fact, researchers for both Congress and the United Nations have attributed the problem more to a speculative bubble, with hedge funds and investment banks driving up prices by betting on basic commodities.

So is there a better way?
Wouldn’t it be nice if we knew? Hans Herren, president of the Millennium Institute, argues that the world’s farmers should focus less on growing more food, and more on growing higher quality food with fewer inputs, thereby enriching the soil instead of depleting it with chemicals. As Herren told my colleague Tom Philpott recently, in gross terms, the world already grows enough food today to feed the world two times over.