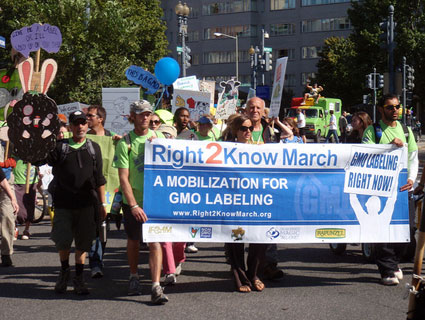 Last week, Paul Towers, a spokesman for the Pesticide Action Network, described Connecticut’s bill as “important” but also “cautious.” Both it and the Maine bill include stipulations requiring other states—including at least one border state—to pass their own GMO labeling laws before they go into effect—so Maine’s bill, for example, does nothing unless New Hampshire and a few other states pass similar bills. Still, members of the Right To Know movement consider the bills a victory—especially after last November’s narrow defeat of California’s GMO labeling bill Prop. 37.

Last October, Michael Pollan worried that the defeat of Prop. 37 would be a sign that a “food movement” may not truly exist in this country. But when California voters turned down the labeling bill in November—after the biotech and Big Food lobbies poured millions of dollars into a campaign to defeat it—Right To Know organizers only became more determined. Since then, 26 state legislatures have introduced labeling or GMO prohibition bills.

Right To Know members see the bills as a direct challenge to the monolithic Monsanto Co. and other biotech giants BASF, Bayer, Dow, DuPont and Syngenta—known as the “Big Six“—which control the world’s seed, pesticide, and biotechnology industries. An industry spokesperson from the trade group Council for Biotechnology Information told me via e-mail that mandatory labeling laws are unnecessary, since there is insufficient evidence that genetically modified foods are unsafe. But Right To Know advocates argue that even if the jury is still out on GMO foods safety, consumers are entitled to know what’s in their food.

Sen. Barbara Boxer’s (D-Calif.) federal GMO labeling bill has been referred to committee where Govtrack estimates it has a 3 percent chance of survival. She and Sen. Bernie Sanders (I-Vt.) also added amendments to the federal Farm Bill that would back up the states in their decision to pursue GMO labeling standards against lawsuits from Monsanto and crew, but those were struck down. However, Sanders’ home state is expected to pass a GMO labeling bill next winter, and Washington state is the next GMO battleground with a labeling initiative on its November ballot. So it appears the food movement remains robust, at least in the states.

“I think Prop. 37 in California was a wake up call and industry is recognizing that,” Towers told Mother Jones. “As more and more states work to pass these laws that would require labeling of GE foods, industry will continue to focus its pressure in Washington D.C. because it has greater access there than it does in each of these state legislatures.”