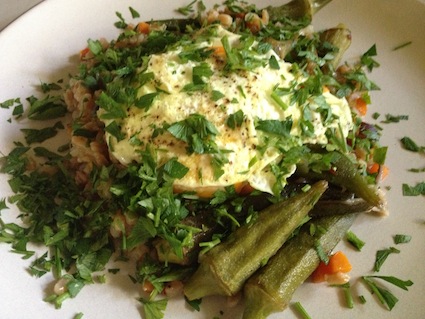 Recently, I scanned my fridge, looking for what I’ve neglected to cook from the previous week’s farmers market run, hoping to be able to avoid a trip to the food co-op. (I know, how Portlandia of me). I came across a treasure: a bag of okra I had picked up from Austin’s wonderful Green Gate Farms and had promptly forgotten about. To my relief, it was still crisp and vibrant.

Coming up with a quick meal with it wasn’t hard. In the pantry, there was a bit of pearled farro—an ancient relative of wheat that never stopped being consumed in Italy and has now found a vogue in the US. I also had eggs, an onion, some garlic, and a few small carrots. I decided to roast the okra, and meanwhile boil off the farro—which cooks in just 20 minutes—and toss it with a quick saute of onions and carrots. I’d top the farro salad with the okra and a fried egg. And make enough for leftovers. So that’s what I did. And no, the okra wasn’t slimy at all!

Roasted Okra with Farro and a Fried Egg

For the farro:
1 cup pearled farro
1 medium onion, chopped
3 small or one large carrots, chopped
1-2 cloves of garlic, chopped (note: To get the full nutritional benefits of the chopped garlic, let it rest for at least 10 minutes before adding it to the hot skillet—I explain why here.)
Olive oil
Salt and pepper
1 bunch parsley, chopped
Lemon juice or apple-cider vinegar

Add the farro, a good pinch of salt, and 3 cups of water to a saucepan and turn heat to high. When it boils, cover, turn heat to low, and allow the farro to simmer until it’s tender, about 20 minutes. When it’s done, drop it into a colander as you would pasta, to drain off excess water.

Meanwhile, cover the bottom of a skillet with olive oil and turn heat to medium. When it’s hot, add the onion and carrot. Let them saute, stirring often, until they’re soft. Then turn heat to low and add the garlic. Give it a few more stirs, letting the garlic cook a bit, then add the cooked, drained farro. Add a dash of olive oil, a lashing of lemon juice or vinegar, a pinch of salt, a generous grind of pepper, and the parsley. Stir to incorporate. Taste and adjust for season.

For the okra:
1 pound of okra, trimmed of stems, rinsed, and dried with a cloth
Salt, pepper, and crushed red chili flakes, to taste
Olive oil
1-2 cloves garlic (see note above), chopped

Preheat oven to 450, and place a large skillet on the stovetop over medium heat. Place the prepped okra in a bowl. Season it to taste with salt, pepper, and crushed red chili flakes, and add a generous glug of olive oil. Toss the okra with your hands until it’s thoroughly coated with oil and seasonings. When the skillet it hot, add the okra to it—it should sizzle. Using a spatula or tongs, arrange the okra until it sits in the pan more or less in a single layer—it doesn’t matter if there’s some overlap. Turn off burner and place the skillet in the hot oven. Let it roast, giving the pan a shake every five minutes or so, until the okra is tender and lightly caramelized. Remove from the skillet from the oven and add the garlic, giving it a stir. It will cook in the hot pan.

To serve, add a portion of the farro to each plate. Top with a serving of okra. Over the okra, place a fried egg. Want tips on how to fry a great egg? Here’s the Guardian with a method using butter, and Spanish chef José Andrés with an ingenious method involving olive oil. I go back and forth between the two.